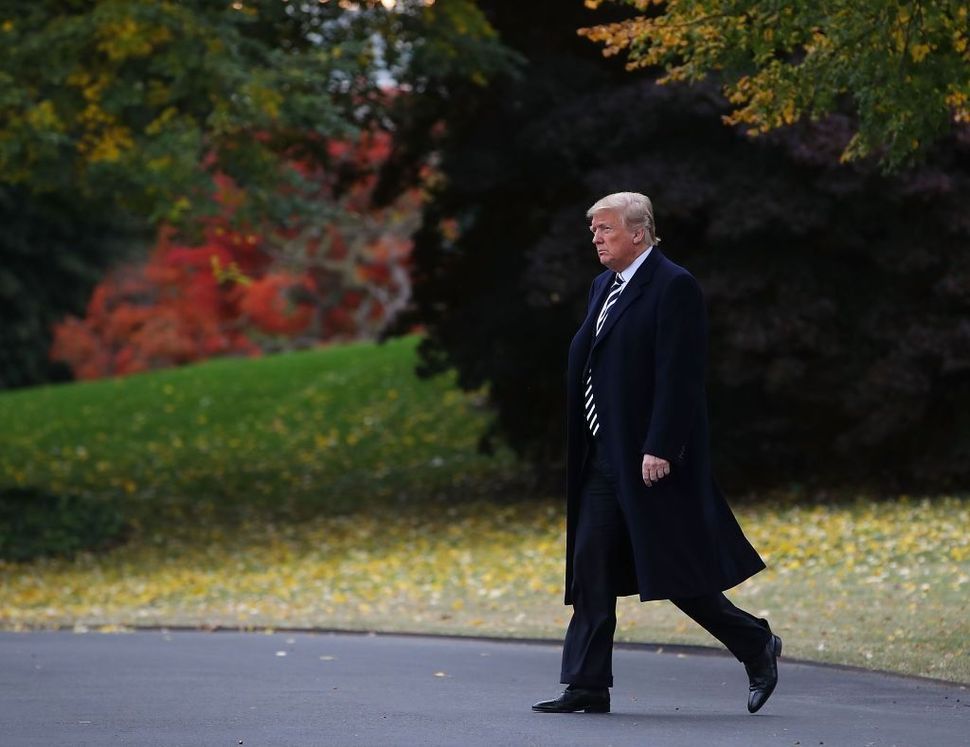 In the aftermath of the terrible synagogue massacre in Pittsburgh, President Trump has been forced to figure out how to respond sensitively while also campaigning for the looming midterm elections. In a world in which 71% of Jews vote for Democrats, many of whom have decided to leverage this tragedy into a political call to arms, this is no easy task.

But it’s a political reality that the President, especially this close to the midterms, is forced to reckon with.

His efforts haven’t been off to a great start. Instead of acting as a comforting presence after the shooting, the President blamed the death toll on the congregants and leadership of the Tree of Life synagogue.

Trump says Tree of Life synagogue shooting in Pittsburgh has “little to do with” gun laws, says the synagogue should have “had some kind of a protection” inside the temple, and later blames synagogue for not having armed guards. pic.twitter.com/AWg5AwkEKp

President Trump had an opportunity to show the country that he is willing and able to be a leader, but he failed.

In countless swing districts across the country, Republicans are facing tough races, and Trump isn’t making their jobs any easier.

In the days that followed, the President traveled to Pittsburgh and met with the rabbi of the Tree of Life congregation, hospital staff and victims.

His daughter Ivanka Trump and her husband Jared Kushner accompanied him, and their presence served as a reminder that the President has a Jewish daughter and Jewish grandchildren.

Unfortunately, many liberals only used this fact to decry the President’s supposed anti-Semitism, arguing that he brought his Jewish family members to shield himself from attacks, or worse, claimed that he was trying to whitewash anti-Semitism.

We’re a country that not only suffers from mass shootings, but from the politicization of these shootings after the fact.

There are ways for politicians to act with sensitivity in the aftermath of a tragedy. Perhaps one of the best modern examples is the unexpected solidarity between New Jersey Governor Chris Christie and President Barack Obama after Hurricane Sandy.

Christie and President Obama literally embraced after the massive storm in 2012.

Mitt Romney’s presidential campaign suffered; criticism of the President became a minefield that Romney was never able to adequately navigate.

The solidarity between President Obama and Christie crippled Romney’s campaign in the weeks it needed to be at its most ferocious. As one commentator put it, “Rather than engage in divisive, partisan behavior, Obama rose above the fray, donned the First Windbreaker, and did his job.”

President Trump had a chance to pull off the same kind of solidarity with the Jewish community and has spectacularly failed.

His most memorable statement was nothing short of victim-blaming. Those praying at Shabbat morning services and celebrating the birth of a baby didn’t enable their killer.

Placing the blame on anyone except the perpetrator is precisely the kind of divisive statement we’ve come to expect from the President in moments we need his leadership more than ever.

There’s no way of knowing what might have been different had armed security been present, though multiple armed members of the police were among the victims of the attack. Their weapons and training didn’t save their lives — or the lives of those around them.

But even if the presence of armed security might have improved the outcome, a unifying and presidential statement would have simply expressed sympathy for the loss of life. Perhaps after, he could have mentioned his support for removing the bureaucratic red tape separating synagogue security volunteers from conceal carry permits.

Of course, it wasn’t just the President who blamed the victims. The Associated Press tweeted that the killer had “exploited doors that were unlocked for worship,” and journalist Julia Ioffe bizarrely blamed pro-Trump, pro-Israel Jews.

It’s especially infuriating to blame Jewish support for the President considering the fact that the shooter was angry at Trump for being surrounded by too many Jewish people.

There is only one man responsible for this terrible tragedy, and only one ideology responsible: anti-Semitism.

Just like the president, the left has wasted an opportunity to promote unity by nakedly exploiting dead Jews for a few House seats. A member of the communications team for the Human Rights Campaign tweeted a common sentiment:

You have the power to bring this all to a screeching halt: by voting.

But you need to vote.#Pittsburgh

Shannon Watts, the founder of Moms Demand, a gun control organization, tweeted that attendees at a vigil chanted one word: vote. Even a vigil isn’t off-limits for some.

Americans at a vigil tonight to honor the victims of the mass shooting inside a Pittsburgh synagogue chanted one simple word over and over again:

VOTE NOV 6 TO DISABLE TRUMP WHO IS LEADING A BAND OF HATERS! https://t.co/azH7L5rILJ

Future Congresswoman Alexandra Oscio-Cortez even sent a fundraising email trying to cash in on dead Jews.

MOST DISGUSTING EMAIL WE HAVE SEEN THIS ELECTION CYCLE. @Ocasio2018 shamelessly using the blood of Jews to raise money for her campaign, and accusing every Republican (including Jewish Republicans) in being responsible and complicit in this antisemitic attack.

President Trump has been made into the boogyman of the massacre by many on the Left. It’s craven, and voters see the effort for what it is, just as they can see the harm in the President’s decision to make a massacre of Jews about having more guns in public spaces.

This is apparently what we do in America in the wake of a mass casualty event. Not only do the President and his prominent opponents politicize the events, but they do so by placing blame on the victims themselves.

Instead of coming together against anti-Semitism, a growing scourge around the world, we’re spending yet another day arguing about President Trump.