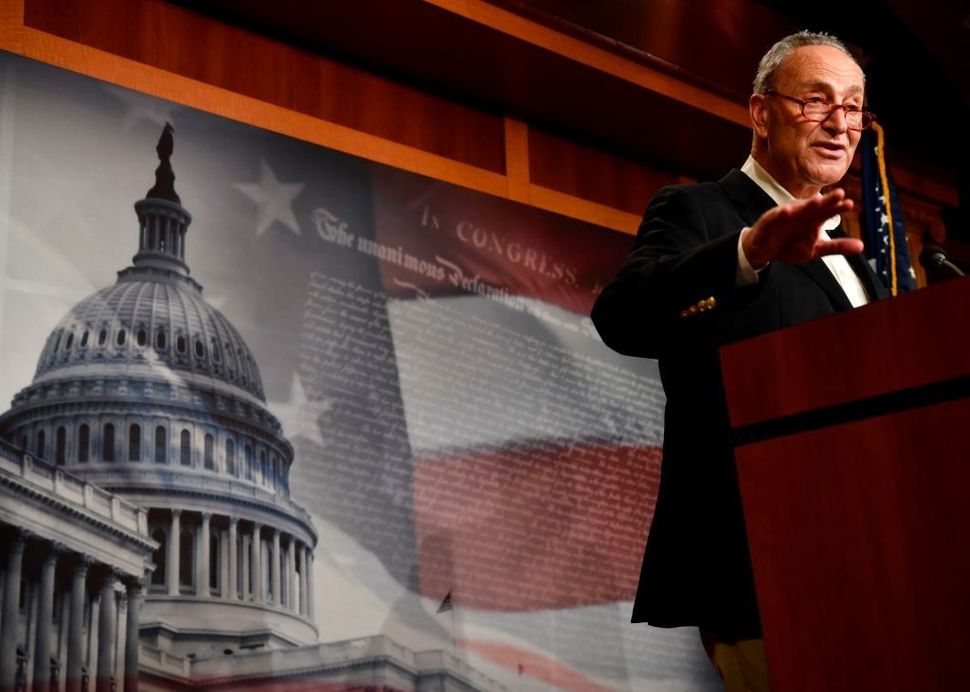 US Senate Minority leader Chuck Schumer (D-NY) speaks during a press conference after Democrats lost more seats in the Senate in Washington, DC on November 7, 2018. - US President Donald Trump hailed a ‘big day’ for Republicans after his party lost control of the House of Representatives in the US midterm elections but increased their Senate majority. Image by Getty Images

One of the more remarkable aspects of the 2018 midterm returns is that they offer something to love and something to hate and fear for just about everyone — Democrats, Republicans, progressives, moderates, minorities and Jews. Especially Jews.

Jewish voters, being overwhelmingly Democrats, are celebrating the party’s recapture of the House.

They’re also disappointed at the party’s failure to capture the Senate, though hardly anyone expected success.

The good news for Democrats is that a Democratic House can open any number of investigations into the allegations of corruption, self-dealing and, of course, foreign collusion in President Trump’s administration.

The bad news is that Trump can send any number of conservative federal judicial nominees to the Senate and see them handily confirmed.

Jewish Democrats should also be pleased that Jewish support for Trump and his Republicans has dropped, according to exit polls, from 23% in 2016 to just 17% now. Feelings will be more divided over the performance of Jewish House candidates this week.

All 20 Jewish incumbents who ran for reelection — 18 Democrats and two Republicans — kept their seats. Among 15 Jewish Democratic newcomers, eight won, while none of the seven Republican Jewish newcomers won a seat.

(Three Jewish House Democratic veterans didn’t seek re-election: Jared Polis of Colorado, who became America’s first openly gay governor; Jacky Rosen of Nevada, who became the ninth Jewish member of the Senate, and Sander Levin of Michigan, who retired at 87 and passed the seat to his son Andy.)

With Democrats controlling the House, Jews will be well positioned to advance what most agree are basic American Jewish values, including reproductive rights, LGBT equality and protection of immigrants.

But tensions are rising over the much-reported emergence of an anti-Israel faction made up of progressive newcomers in the Democratic caucus. The good news is that the fear almost entirely nonsense. Alarmists point first to media darling Alexandria Ocasio-Cortez of New York, then to Palestinian-American Rashida Tlaib of Michigan, Somali immigrant Ilhan Omar of Minnesota and journalist-turned political hopeful Leslie Cockburn of Virginia.

Some reports also include incoming freshman Ayanna Pressley of Massachusetts. This is lumped together in some reports with the 180 who received — and accepted — endorsements from the liberal pro-Israel lobby J Street.

For rightists who see J Street’s dovish stance as anti-Israel, this is a deeply disturbing turn.

Of the five, Cockburn was accused of anti-Semitism because of a 1992 book, a scathing portrait of U.S.-Israeli covert relations, that she co-wrote with her husband Andrew Cockburn.

(It might not be a coincidence that Andrew Cockburn is the brother of the late Alexander Cockburn, a left-wing journalist, was frequently and credibly accused of anti-Semitism.)

In any case, Leslie Cockburn lost her race and is now no more relevant than the avowed Nazi Arthur Jones, who ran as a Republican in Illinois and lost.

As for Pressley, it’s not clear why she would be included on any such list.

She’s not known to have mentioned Israel in public and isn’t even identified with the progressive wing.

And Ocasio Cortez? She spoke harshly of Israel in one interview but backed away the next day, saying she didn’t know much about the issue. In the end, what she and Pressley have in common is merely the fact that both are outspoken young women of color who ousted white male Democratic incumbents and make convenient boogie-men.

Then there are Tlaib and Omar.

They’re being celebrated as the first Muslim women to enter Congress.

This creates some awkwardness, as it pits liberal support for their achievement as members of a religious minority against alarm over their very explicit hostility to Israel — not its policies or actions but its existence.

Omar accused Israel in a 2012 tweet of “evil doings,” then doubled down when criticized for it this summer, saying the attacks on her were “rooted in bigotry toward a belief about what Muslims are stereotyped to believe.”

Tlaib’s endorsement from J Street was withdrawn this year after she called for a one-state solution to the conflict and vowed to vote against aid to Israel.

There have been harsh critics of Israel in Congress before, notably long-ago Republican representatives Pete McCloskey and Paul Findley and Democrats Cynthia McKinney and Earl Hilliard.

But there haven’t been members who declared verbal war on Israel in this open manner — and enjoyed some measure of immunity because of their celebrated ethnic-religious identities.

Tlaib, Omar and Ocasio Cortez all have enthusiastic followings among young progressives, who generally disregard Israel talk as not their business.

Attacking the iconic new heroine of the left has little effect except to alienate the left even further. Democrats are in a real bind. Jews on both sides of the aisle can take pride in the fact that in the new House, six of the 21 standing committees will be chaired by Jews. Among them are four of the most important panels.

Intelligence will be headed by Adam Schiff of California, who is itching to reopen the Russia investigation and issue subpoenas.

Judiciary will be headed by Jerry Nadler of New York, who will be rushing to find ways of protecting the Mueller investigation.

Nadler will also have to decide whether to accede to progressives’ demands that he open impeachment proceedings. Pro-Israel activists should be pleased that Foreign Affairs is to be chaired by Eliot Engel of New York, one of Capitol Hill’s most reliable allies of the Zionist Organization of America and others on the right.

What’s more, Appropriations will be chaired by Nita Lowey of New York, who has done much of the heavy lifting for aid to Israel for decades. In the end, that’s the message of this election: We’ve entered a murky, perilous new era.

Democrats like to blame Trump and the Republicans for the incendiary mood, but it started long before Trump and isn’t limited to his side of the aisle.

It could be argued that the essential difference between the Democrats’ moderate and progressive wings is whether one views Trump’s voters as ignorant racists who should be disregarded or opposed, or alternatively as abandoned 99-percenters who are stirred by Trump’s promises and willing to overlook his racism.

Neither argument can be proved, and they might both contain truth. But how Democrats resolve the debate will determine the fate of the party and the nation for a generation.

J.J. Goldberg is an editor-at-large for the Forward. Follow him on Twitter at @jj_goldberg or email him at Goldberg@forward.com