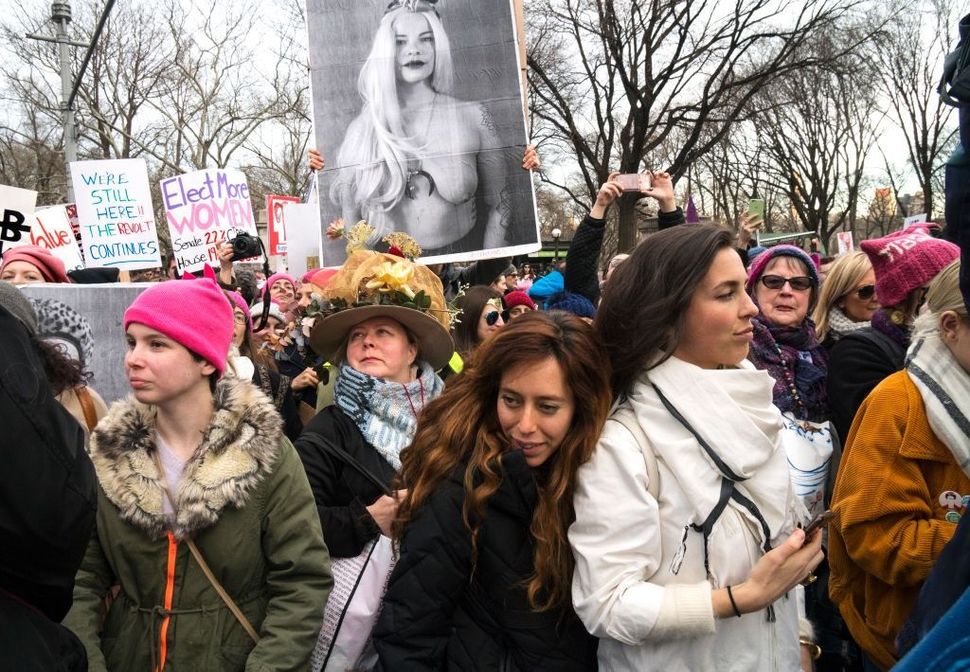 Demonstrators hold signs saying ‘Elect More Women,’ and ‘The Revolt Still Continues.’ One year after the inauguration of President Donald Trump thousands of people gathered on January 20, 2018 in New York City to protest for women’s equal rights, as well as an end to sexual exploitation. Image by Getty Images

Over 24 months, I had gone from being normal to being radicalized, perhaps one might even say woke.

I had gone from being completely selfish and disinterested in politics to completely obsessed.

And I was not the only one.

At a recent appointment, my doctor mused about the five house candidates she was supporting. Her partner was newly in engaged in the fight for choice. My friends who used to spend their weekends antiquing now spent their weekends canvassing in upstate New York. On a recent Saturday, I ran into three friends at a protest.

Suddenly, we were no longer lazy bloated Democratic hobbyists who lectured our friends at dinner parties. All of a sudden, we were the 1960s radicals our parents had been, because we had to be.

Donald Trump — and Trumpism writ large — had transformed us from quiet election-year Democrats into fierce radicals.

Growing up, I was never radical. This despite the fact that I am the daughter of a hippy and feminist, the writer Erica Jong, and the granddaughter of a communist, Howard Fast, who went to jail rather than name names during the House Un-American Activities Committee.

Rather than being political, I wrote novels no one read about the nuances of social class among the wealthy. I wrote articles about clothing and the various charming neuroses I had acquired through my complicated and vaguely dysfunctional childhood.

I was a yummy mummy, my days spent musing about getting kids into private schools and working out. I would have conversations with my friends about the danger of dairy; to say I was not a serious person seems like a huge understatement.

And sure, I marched against the second Iraq war, but mostly I was a bourgeois housewife with kids and a co-op and a husband who supported me.

I was a character out of a 1950s period piece, steeped in patriarchy and innate sexism.

I was also a relative “conservative.” I had argued (occasionally and mostly in the 1990s) that feminism was no longer needed, that anti-Semitism was overblown, that Republicans had some good ideas.

And while I didn’t vote for Mitt Romney, I certainly could have.

But everything changed when Donald J. Trump was elected president. 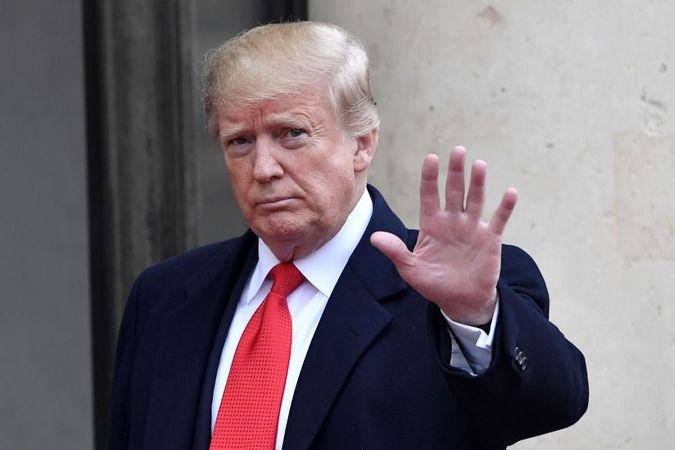 In 2015 I had occasionally worried about incredibly unlikely scenarios in which Donald Trump would become president. But because so many of the people in my life assured me it would never happen, I believed them. These moments were like the times I worried I had a brain tumor or felt a lump in my breast; they were relegated to the category of neurotic flareups and not actually possible outcomes.

Sometimes I’d get anxious, but then I’d reassure myself that the worst-case scenario would never happen, that it’s never the thing that you fear most, it’s always something it didn’t even occur to you to fear.

When I’d get really worried, I’d think about the Princeton Election consortium and good old Sam Wang. Sam Wang was so sure that Donald J. Trump wouldn’t become president, he had promised to eat a bug on national television if Donald J trump won.

There was no way Sam Wang would have offered to eat a bug unless he was completely sure that Trump was going to lose.

I have always been the person who is convinced that possible catastrophe is lurking behind every corner. But in 2016, I was convinced that Democrats would win, because they’re the good guys and good guys win in the end. 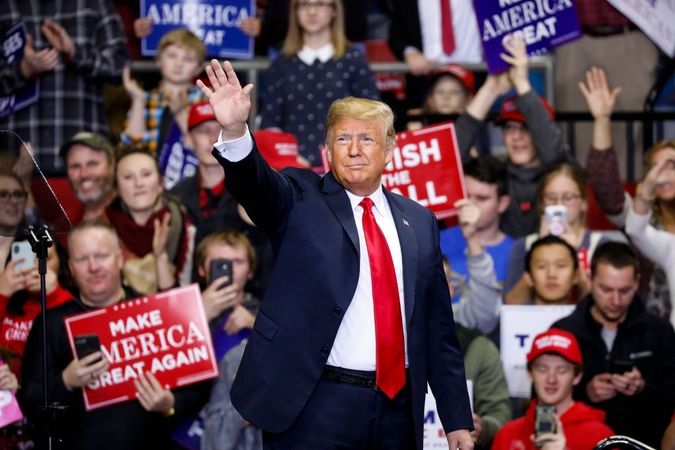 In 2016, the good guy did not win. The scary incompetent reality television host who didn’t understand science won, and for the first time in my entire life, I felt disenfranchised.

I had never been so deeply at odds with reality. It shook me to my core. It became clear to me, as it did to many Americans at that moment, that everything I knew with great certainty was wrong.

Something broke in my heart.

I was deeply worried for my daughter, that she would now have to live in a country run by a man who had more than a dozen sexual assault accusations against him.

I was completely sure that President Trump would undoubtedly embolden both misogyny and racism.

And I felt for the first time completely betrayed by my fellow white women.

How could a woman vote for someone who was so obviously a misogynist?

I cried every single morning for three weeks. I felt so profoundly angry and dismayed.

I couldn’t believe what I was seeing. I had never been so let down before in my life.

I was also completely baffled. Did the rest of America not read the Huffington Post? Had no one watched the last sixth months of Rachel Maddow?

They didn’t. And they hadn’t. 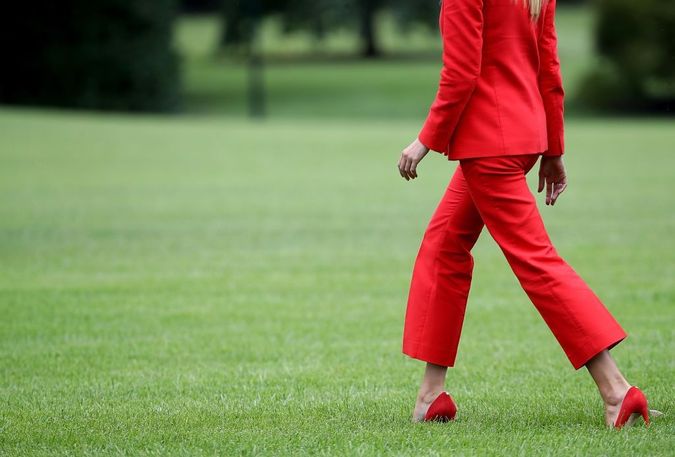 It wasn’t like my first female president had lost to a patronizing but relatively well-meaning Christian like Marco Rubio, or to an unlikable and yucky guy from Texas via Canada like Ted Cruz. She had lost to a satire of a president.

And the worst part of it was that I was subjected to constant thought pieces about how white women had elected the guy with half a dozen sexual assault accusers.

I was a white woman and I was pretty sure I hadn’t elected this lunatic. And yet, others I knew had. On Facebook, a blonde friend of mine posted a confessional about how she had voted for Trump because she was sick of feeling scared in America. I could feel my blood boil. Of course, she was also married to someone who worked for the Trump organization.

Immediately, we Democrats went collectively to the bargaining stage of grieving. People told me not to worry, that President Trump had always been a Democrat, that he wouldn’t continue with all the silly fascist soundbites that had gotten him elected. After all, there was no way he’d actually build a wall. And Ivanka would be a moderating force.

Maybe Jared would Democrat him up?

“Don’t worry, the system is put in place to prevent him from having too much power.”

Every month brought a new horrible reality: from a Muslim ban to kids in cages to a wildly unpopular largely corporate tax cut. It was like my worst nightmare: Everything the guy did was either undemocratic or crazy or horribly regressive.

Luckily, by that time, my fellow Democrats and I had begun quietly working away. 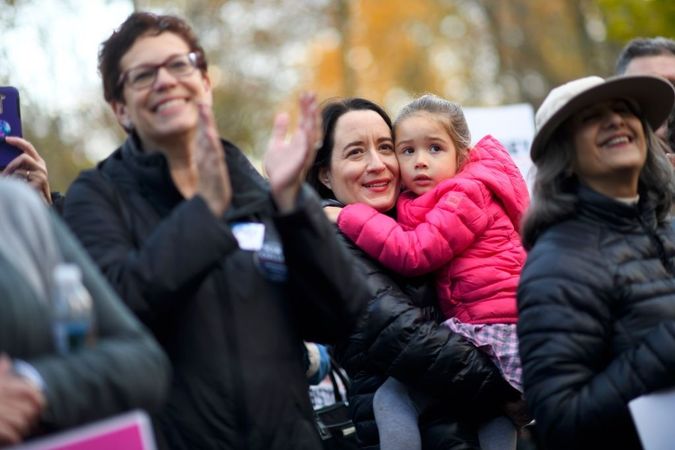 Mother and daughter, Dimitra Dimopoulou, 44, and Maria Muscato, 5, at a political rally. Image by Getty Images

When I woke up on November 7th, 2018, everything was different.

I am on the board of the Arena Summit, an organization that helped find excellent Democrats to run for office.

I had raised money for Swing Left, an organization completely focused on flipping the House.

I had been to summits, heard activists and written about them.

I had tweeted zillions of tweets (though I’m not sure that helps anything).

I had taken my kids to protest.

I had nagged all my friends endlessly to give money to Democrats. I had spent hours writing emails, throwing parties, listening to great candidates tell their stories.

And it wasn’t just me. All of a sudden, all we did was politics — because we had to.

On Thursday, tens of thousands of people marched to protest the firing of Jeff Sessions.

Perhaps, we had to become a nation of radicals, not because we wanted to be but because had to be.

We had been made “woke” by the roar of Trumpism and by its many grotesque consequences.

Am I a member of Pussy Riot now? Not even close.

But I am a fully functional participant in democracy these days, and I wouldn’t have it any other way.