How Ivanka Trump And Don Junior Weaponize Class — In Opposite Ways 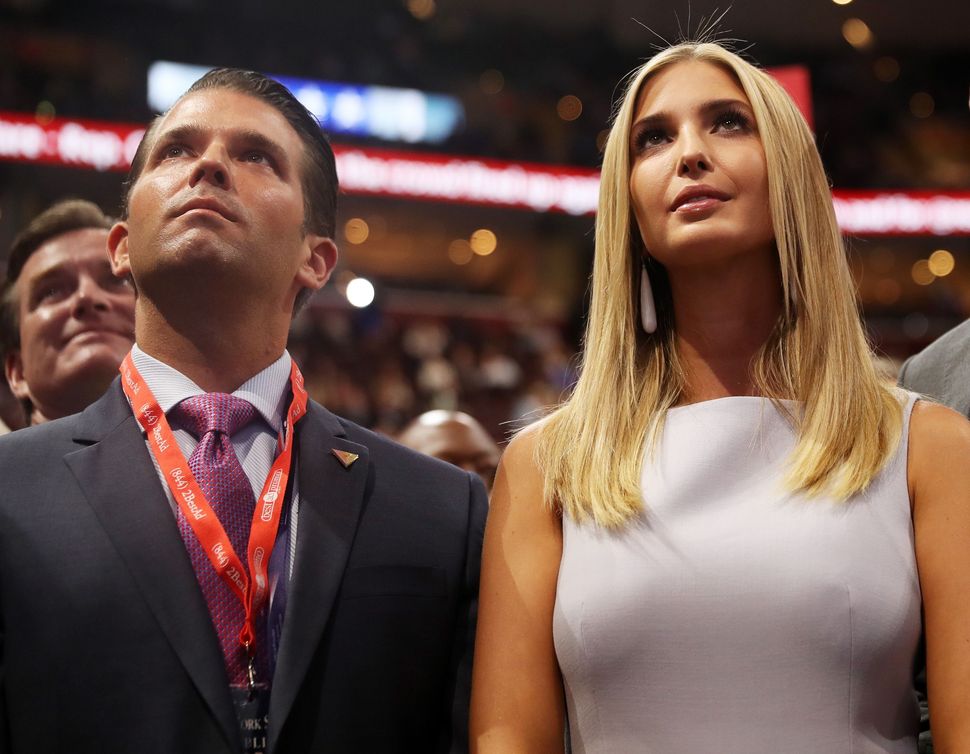 Donald’s Trump’s money has been the subject of frequent discussion. Less often discussed is the question of class in relation to the President, or his family. But the class dynamics at work in the Trump clan — specifically, the way class is performed by the Trumps — provides a secret window into an important and overlooked facet of American life.

Of Trump’s five children, ranging in age from forty to twelve, two take the task of performing class the most seriously: Ivanka and Donald Junior.

It’s true that both are extremely wealthy, but class is not reducible to money. Instead, it’s a set of social markers — clothes, behavior, mien, priorities — that signal belonging to one group over an another.

What’s fascinating is that Ivanka and Don Jr. are both carefully curating class performances — but of different classes. Ivanka is performing upper-middle-class career woman, while Don Jr. is performing working class regular Joe. 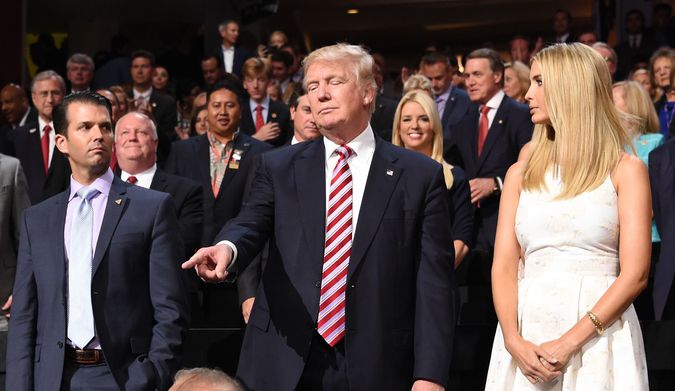 Then-candidate Donald Trump stands between two of his children, Ivanka and Don Jr., at the Republican National Convention Image by Getty Images

And while the two are not-so-quietly locked in a battle for who will become their father’s heir apparent, this performance is not a reflection of Trump but of America.

Just four years apart, Junior and Ivanka grew up in the same house, have the same parents, went to similar private schools in Manhattan and the same Ivy League college.

And yet, to look at them today, it’s as if they came from entirely different backgrounds. Oddly, the siblings have decided to weaponize the affects of two completely different social classes.

As “adviser to the president” Ivanka works at her ceremonial White House job, along with her obedient husband Jared Kushner. But she was until recently a “businesswoman” running a fashion brand (it recently shuttered). And not just any fashion brand. Ivanka Trump styles specialized in a super-femme business wear — think pink sheaths and nude high heels. Ivanka’s brand was for the career mom in demure pastels, and she worked hard to embody that brand.

Love it when Theodore comes to visit me at the office ? ☀️ #LunchDate #TBT

The career mom is not actually a natural fit for a Trump if you think about it. After all, Ivanka was brought up in girls’ schools, the kind that teach deportment.

Indeed, Ivanka is not a modern woman in any sense of the word. From her hair which is foiled a honey blond color and blow-dried to enjoy a shiny bounce — evocative of a 1950s socialite — to her smart skirt suits and heels, Ivanka has been coiffed and dressed to achieve a very particular effect on all who see her.

For women, she’s meant to be an object of envy, with her perfect figure and perfect hair, but as every influencer will tell you, to be envied, the fruits of one’s labors must give the illusion of being achievable; you can’t envy what you could never have, but only what you think you should have, if only you worked harder.

Ivanka is performing the aspirational destiny of every upwardly mobile middle class woman. And in so doing, she’s holding out the promise of the American Dream. Work hard enough and you, too, can look like this. 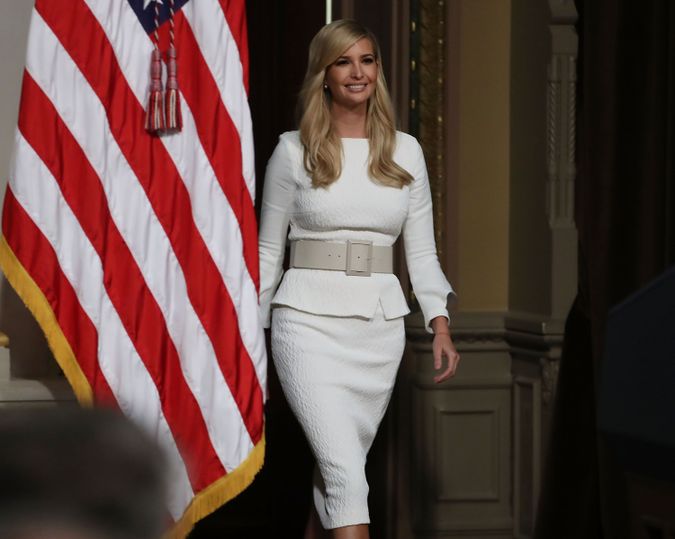 Ivanka Trump at work as a White House adviser. Image by Getty Images

Of course, you can’t. Ivanka’s success is not her own but her father’s, whose success is his father’s. And this is why you almost never see Ivanka in flats or in pants. Because ultimately, her success belongs to men, and so does she. It’s why those dresses are always in pastel, so no man can ever be threatened by her.

Don Junior on the other hand ostensibly runs daddy’s business, and also crisscrosses the country raising money for minor congressmen and the occasional senator in deep red states.

And like his sister, Junior is a throwback to a different time, but in a completely different way.

Junior is the prototypical angry white man of the 1950s. He has five kids. He shoots guns. He wears camouflage. He goes hunting with the navy seal who killed Bin Ladin.

He advertises himself as an entirely testosterone- and ammunition-based life form. He is also famous for his affinity for conspiracy theories. Junior does not aspire to be thoughtful or serious. He is on a continuous, almost spiritual quest to lower the discourse.

And it’s this “authentic” (read: racist) version of American history that Junior is selling. Remember the good ol’ days? Before Jews were allowed into country clubs?

Junior is Archie Bunker. He is Roseanne. Ivanka is Sigorney Weaver in “Working Girl.” 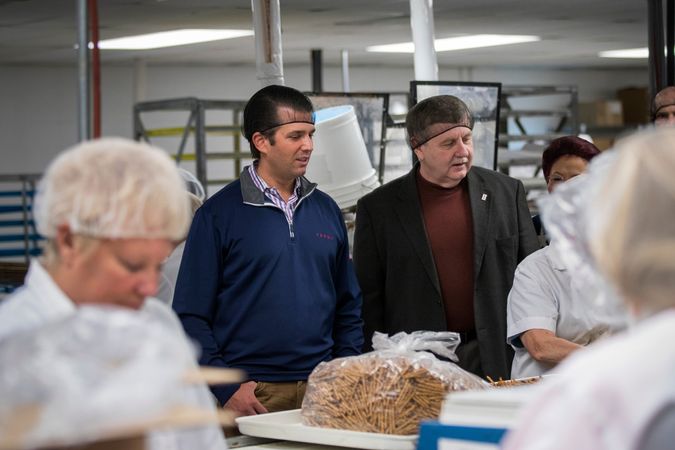 This class war between Ivanka and Junior plays out on social media, among other places. One of Ivanka’s most “iconic” Instagram post was of one of her small children hiding the folds of her enormous ball gown while she laughed politely.

My pre-game partner in crime!

Ivanka’s life is presented to us smoothly, non-controversially, inoffensively. We see photos of her walking to shul with her Jewish husband. We see photos of her praying at the wailing wall. Her social media profile is polite, and glamorous. Occasionally we are treated to Ivanka pantomiming “work.”

Talking #WorkforceDevelopment and Infrastructure in Iowa today! @realdonaldtrump’s #Infrastructure initiative includes a robust plan to expand skills-focused learning to prepare the next generation of American workers for 21st century job opportunities. Thank you @kimreynoldsia for your commitment to STEM education and skills training and for all the amazing work that you are doing in the great state of #Iowa! ?: Rodney White, The Register

Like her social media, Ivanka is a master of speaking and yet saying very little, a master of obfuscation, of the medium over the message, style over substance.

When asked about her father’s sexual assault allegations, she deemed it “a pretty inappropriate question to ask a daughter.” She once cut off an interview with Cosmo magazine because according to Ivanka, the interviewer had “a lot of negativity” in her questions. Ivanka never verbalizes her anger but rather her displeasure, the way Princess Di might.

As Elizabeth Spiers writes about Ivanka, “She aims for neutral or positive responses and goes to great lengths to avoid confrontation.” This of course is another trick of the wealthy to suppress conflict.

He was the first to make fun of doctor Christina Blasey Ford with his Instagram post implying that Justice Kavanaugh was too young to be held responsible.

Oh boy… the Dems and their usual nonsense games really have him on the ropes now. Finestein had the letter in July and saved it for the eve of his vote… honorable as always. I believe this is a copy for full transparency. ??????? #politics #maga

Junior also posted a misleading photo of Anderson Cooper during a hurricane and gleefully accused him of “Fake News.” And he spent days making fun of Elizabeth Warren’s Native American DNA claims.

Amazing thread. You think if a conservative lied about their heritage, presumably for special treatment throughout their career, that the media would give them the pass they have given Warren? Not for one second! https://t.co/hwUTlkH81J

In every post, Junior invites conflict and controversy — the exact opposite of the throaty-whispering Ivanka.

Ivanka is the peacemaker, while Junior is the warrior. Of course, both are clichés of 1950 gender identities. 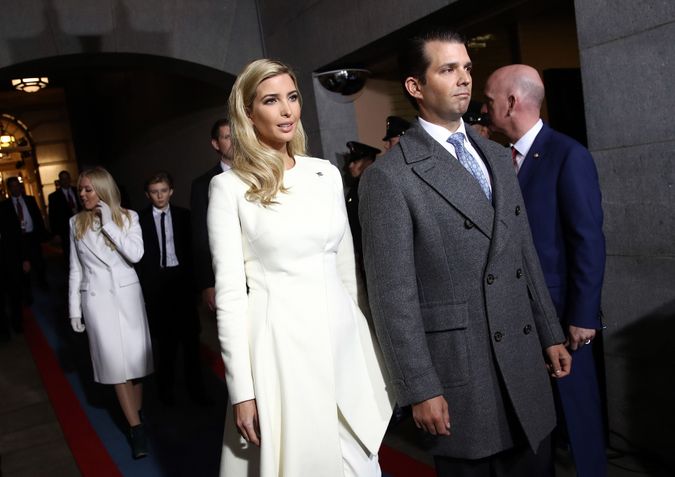 Ivanka Trump and Donald Trump Jr. arrive on the West Front of the US Capitol on January 20, 2017 in Washington, DC. Image by Getty Images

But more interesting is the way these competing visions of American authenticity are being played out as such obvious fictions.

The truth is, the children of a billionaire or even a millionaire belong to neither the working class nor the aspirational upper middle class.

Well, if there’s one thing Trump world is known for its complete and utter inauthenticity.

Ultimately, we have no real sense of what the Trump kids are really like. But their choices to project these two wildly different socio-economic classes tells us a lot about the Trump family’s obsession with 1950s gender roles, and even more about class fantasies in America.

How Ivanka Trump And Don Junior Weaponize Class — In Opposite Ways