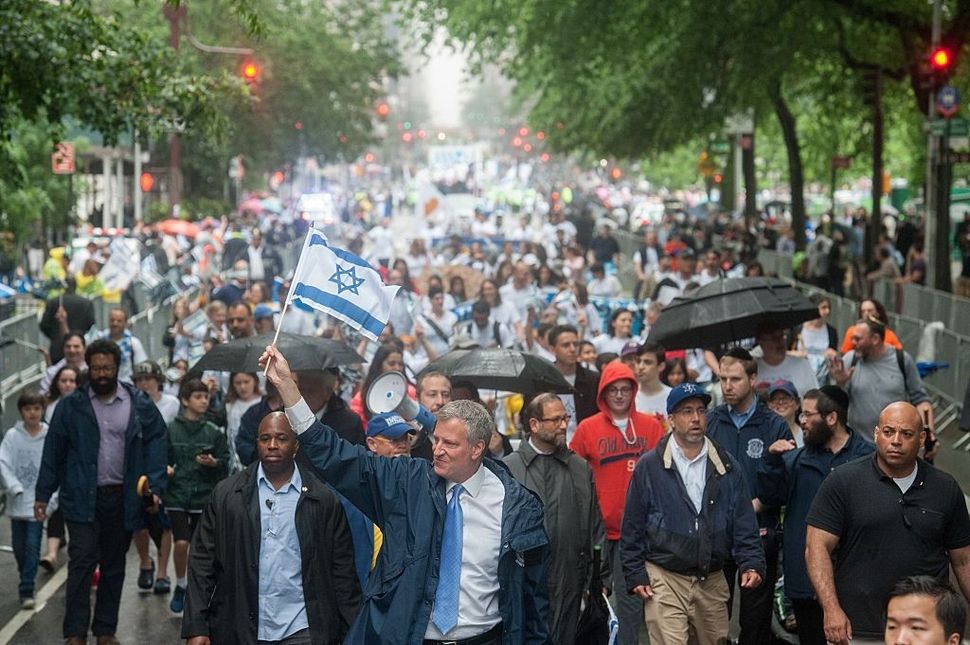 Palestine does not exist.
There, I said it again.
Also, Congresswoman Omar is an antisemite. Said that too.
Thanks for following me. https://t.co/apM565HoEV

Yeger, who seemed genuinely shocked at the response to his tweets, was operating according to the rules of a different era, one in which there was a welcoming space in the Democratic Party for the kind of hard-line views he expressed.

A two-state solution is the best hope for peace. I challenge anyone who thinks the State of Israel shouldn’t exist. But the same goes for anyone who would deny Palestinians a home. https://t.co/3JvnS4UOhm

The negative reaction to Yeger’s comments from New York Democrats underscored a shift in the local party: While Democratic officeholders are still overwhelmingly pro-Israel, they now tend to be far less conservative and more mindful of Palestinian rights than they once were. The shift was already apparent in the backlash to Governor Andrew Cuomo’s reelection campaign mailer that speciously accused his rival, Cynthia Nixon, of supporting what they called an anti-Semitic boycott movement.

The fact that this shift is reflected with such force and vigor in New York City, where the incentive for a Democrat to be vocally pro-Israel is strongest, is the closest thing to a death knell for the right-wing perspective on Israel in the party that we’ll probably see.

A variety of factors contributed to this outcome, the most important of which were the Obama administration’s open conflict with the Netanyahu government, which put into stark relief the widening values gap between Israel and American liberals, and the emergence of an influential progressive movement unafraid of championing the once-stigmatized Palestinian cause.

During President Obama’s first term, it was not uncommon to find vitriolic opposition to his Middle East policies among Democrats in New York. In 2010, Former Congressman Anthony Weiner, who at the time was a firebrand fixture of MSNBC and the progressive blogosphere, reportedly tried to speak at a rally to protest the administration’s opposition to settlement construction.

Dov Hikind was once sought out for endorsements by Democratic politicians, including Hillary Clinton when she was running for U.S. Senate in New York. I distinctly remember former Governor David Paterson appearing on Hikind’s Saturday evening radio show more than once, where Obama-bashing was de rigueur.

Hikind is now a pariah in Democratic circles.

Most Democrats never agreed with the extreme stances of Hikind’s ilk; they were mostly moderates who supported the two-state solution. But they nevertheless treated a supporter of Meir Kahane and Greater Israel expansionism with the reverence reserved for a powerbroker.

Yeger’s fateful error was being born too late. In previous decades, his comments would’ve garnered little controversy. Democratic politicians here had no reason to fear a backlash from relatively weak supporters of Palestinians, and thus no reason to condemn someone they saw as a political ally.

Times have clearly changed. Rank-and-file Democrats and progressive activists are no longer willing to tolerate uncompromising pro-Israel positions that disregard Palestinians. While only a minority actually supports boycotting Israel, many others defend their right to do so, including Senator Kirsten Gillibrand.

That the Democratic leadership in Washington was reluctant to fully grapple with the controversy stirred by Congresswoman Ilhan Omar’s controversial tweets about Israel and the American Israel Public Affairs Committee suggests there is now more than one interest group in the party concerned about Israel and Palestine, including Palestinians now asserting themselves in electoral politics. Councilman Justin Brannan, who represents many Palestinians in Bay Ridge, told off Yeger on Twitter, saying “Please don’t tell my constituents their homeland doesn’t exist.”

I love you, brother, but this isn’t helpful.

As u know, I proudly represent one of the largest Palestinian communities in the country. And I support their aspiration for self-determination, in an independent state.

But it shouldn’t be lost on anyone that most of the official condemnations of Yeger explicitly referenced support of the two-state solution. Just as there are those in the pro-Israel community who are indifferent and even hostile toward the rights of Palestinians, there are supporters of the one-state solution on the other side with ambitions to dismantle the State of Israel. New York’s Democrats are leading the way in rejecting both zero-sum games.