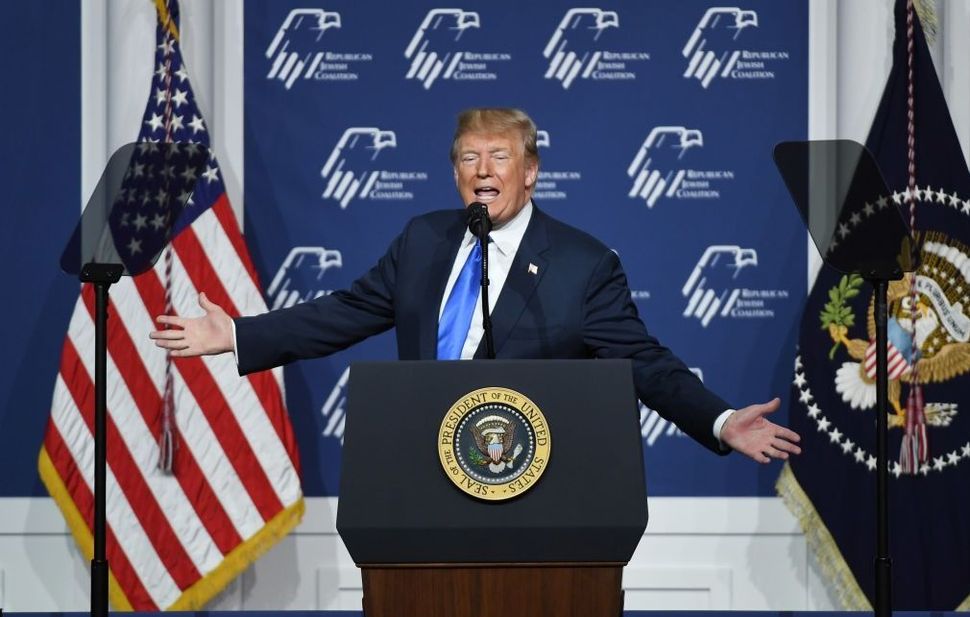 LAS VEGAS, NEVADA – APRIL 06: U.S. President Donald Trump speaks during the Republican Jewish Coalition’s annual leadership meeting at The Venetian Las Vegas on April 6, 2019 in Las Vegas, Nevada. Trump has cited his moving of the U.S. embassy in Israel to Jerusalem and his decision to pull the U.S. out of the Iran nuclear deal as reasons for Jewish voters to leave the Democratic party and support him and the GOP instead. (Photo by Ethan Miller/Getty Images) Image by Getty Images

We know little about the coming plan for Middle East peace being offered by the Trump Administration, but the pre-emptive strikes against it have begun. “Dead on arrival” is a phrase we’re hearing a lot these days.

It’s odd: If the White House is trying to resolve the century-long conflict between Jews and Arabs, should we not give it every ounce of support to succeed? Shouldn’t we give peace a chance?

I actually believe — and I ask you to bear with me — that after decades of failed attempts, this one has as good a chance of succeeding as any that came before it. I know it seems counterintuitive. But to understand why requires taking a hard look at why the others failed.

One version — let’s call it the Diplomat’s Approach — has dominated peace efforts for half a century. This approach says let’s get everybody to the table. We all want basically the same things, per the Diplomat’s Approach, and only by talking can we find the formula to end the conflict. Just by showing up, each side shows it wants a deal; the only question is how to achieve it.

In this approach, we get together, we talk, we allay concerns and incentivize concessions, we find points of agreement, we assume good faith, and ultimately, we get it done. Like going out to a restaurant for dinner, the most important thing is not which restaurant you choose, but what happens in that room.

But there’s a problem with this approach: It’s a lot easier to agree on a restaurant if everyone’s hungry. But if somebody doesn’t really feel like eating, or they’re not in an accommodating mood, their position may harden. “Burgers or nothing” suddenly becomes reasonable when you don’t care if anyone else gets to eat.

The downside of the Diplomat’s Approach, in other words, is that it incentivizes talking rather than agreeing. It focuses on creative formulae and vapid speech-making rather than changing minds. The diplomat’s job is to bring the sides to the table, and not much else. Middle East peace is like curing cancer: Nobody ever got fired for failing to make it happen. It’s the effort that counts.

The second approach — let’s call it the Dealmaker’s Approach — says something very different. Dealmakers don’t care too much what happens in the room. They focus on what happens beforehand. They work on building leverage, threatening competitors, filing lawsuits, moving tanks, limiting the other side’s options.

A dealmaker analyzes a situation through what we call a “power map.” Who has power? How is each side vulnerable? What are the different parties likely to do, and how can we use our own power to change the other guy’s mind?

The dealmaker’s basic assumption is that the will to agree is something fluid, and the goal is to get the other side to want a deal — on your terms.

If there’s a summit or a peace conference, it’s meant to reflect a change that you engineered in advance. Its purpose is not to talk but to close.

The last generation has seen a long series of failures in the peace process under the Diplomat’s Approach. The 1993 Oslo Accords brought massive rewards to the PLO in exchange for a promise of nonviolence: weapons, land, control, money. But there was no peace. There was no “end-of-conflict” clause in the accord. There was no disarmament; quite the contrary.

Oslo was an ill-conceived interim deal in which all sides could claim victory, but all the key questions were pushed off to a later date: Jerusalem, settlements, refugees, sovereignty, final borders. 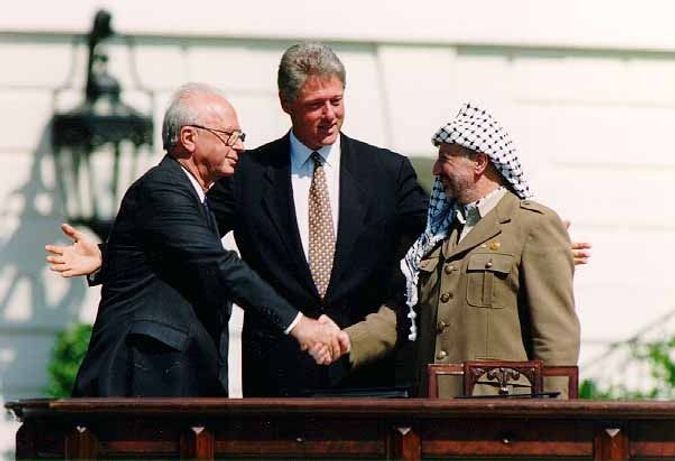 But the endless, fruitless process brought infinite self-importance for diplomatic professionals. And for the diplomatic world, the Palestinians became superstars. Their cause is the holy grail of peacemaking. Their suffering trumps other suffering, their umbrage other umbrage. So it has been for three decades.

It seemed we would be stuck in this morass forever. But then something unexpected happened: Donald J. Trump.

President Trump is a dealmaker, not a diplomat. He has made his life not as a mediator but as a real estate mogul with a special disdain for diplomatic nicety. And he has made very clear who he is. Like him or hate him — he is what he is.

Trump arrived at a time when the Middle East power map had changed, dramatically, over the last decade. The 2015 Iran Deal drove Arab states, especially the wealthy Gulf States, into a quiet alliance with Israel, which meant abandoning their substantive backing of the Palestinians. The rise of ISIS in Sinai pushed Egypt into greater cooperation with Israel than ever before. Abbas lost the Gaza Strip to Hamas. He is weaker than ever, at a time when Israel has grown a lot stronger, both economically and strategically.

For people who respect the power map, trying to force Israel, rather than the Palestinians, to sacrifice core interests for a deal makes no sense and will not work.

These historic changes matter little to diplomats, of course. As far as they’re concerned, you still have two sides with the same grievances, concerns, and demands as before. If there’s no deal, it’s not the diplomats’ fault, but that of the leaders who just don’t have the guts to make peace.

For the dealmaker, however, everything has changed. In his eyes, the chances of closing are actually greater now than ever before. For while diplomats like balance — two sides, at the table, as equals — dealmakers like imbalance: At least one side should feel desperate for a deal. Preferably not your side.

That’s why President Trump is not even pretending to mediate. In his view, American power, rather than peace, is the primary interest, and in the Middle East, Israel is a projection of American power.

He’s not wrong. Since the 1970s, Israel has built its economic and military success largely through the American partnership. It has its limits; Israel is still a sovereign democracy, and its leaders have to answer to voters before American Presidents. But on the whole, Israel is a strong ally, with a huge electoral support base in the United States.

For Trump, this negotiation should come out in Israel’s favor, not just to help Israel but to build American power.

That’s why he moved the embassy to Jerusalem and recognized the annexation of the Golan Heights. That’s why he responded with tacit approval to Netanyahu’s election-eve vow to annex settlements. That’s why he cut funding to the Palestinian Authority and why he stood in Bethlehem and lectured Abbas on how “wise” King Salman of Saudi Arabia is. All of it increases pressure on the Palestinians to take the coming “deal of the century.” 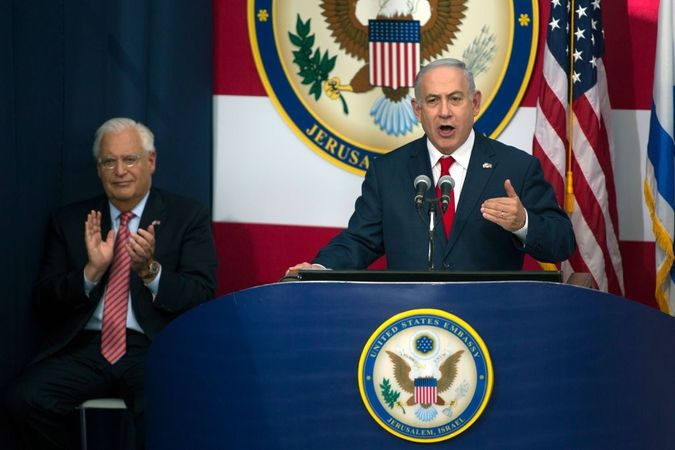 JERUSALEM, ISRAEL - MAY 14: (ISRAEL OUT) Israel’s Prime Minister Benjamin Netanyahu speaks on stage as U.S. ambassador to Israel David Friedman (L) claps during the opening of the US embassy in Jerusalem on May 14, 2018 in Jerusalem, Israel. US President Donald J. Trump’s administration officially transfered the ambassador’s offices to the consulate building and temporarily use it as the new US Embassy in Jerusalem. Trump in December last year recognized Jerusalem as Israel’s capital and announced an embassy move from Tel Aviv, prompting protests in the occupied Palestinian territories and several Muslim-majority countries. (Photo by Lior Mizrahi/Getty Images,) Image by Getty Images

The plan that’s about to be unveiled will, in all likelihood, reflect that. It will strengthen Israel and strengthen other US allies. It will weaken those who have chosen the wrong side. Those who danced on rooftops in Ramallah after 9/11 will not come out ahead.

All the diplomats will say it’s a non-starter. But their opinion doesn’t matter right now.

The only question that matters is: Has the power map shifted enough to twist the Palestinians’ arm into signing?

We don’t know the answer. How all of this plays out depends on a lot of factors. It depends on the administration’s ability to get the Arab states fully behind the plan. It depends on what repercussions Abbas believes he will face internally if he gives up on traditional PLO demands and abandons the perpetual revolution. It also depends on whether he’s like the mob boss who prefers jail to freedom because he’ll get killed if he’s let out. And it depends a lot on the black box of Palestinian succession; Abbas is old and ailing, and nobody knows what comes next.

It’s not easy to get all this lined up, and it’s not clear it’ll work. Trump needs Netanyahu’s political mastery to maximize Israeli flexibility and get a deal through the Knesset. In the broad sweep of history, a sudden break with a century of conflict seems unlikely.

Indeed, we are already seeing an inkling of change on Abbas’ part. This week, out of the blue, he declared he was ready to meet Netanyahu without preconditions. We could well be on the brink of talks.

And the American Jewish community has a moral imperative to support it.

Anyone who is paying attention knows that peace and justice rarely go together. Will American Jews, seeing that peace might come from the Wrong People in the Wrong Way, accept it, or will they adopt the belligerent airs of the hot radical?

The new U.S. effort probably won’t lead to a deal. Israel’s minimum security requirements are probably too much for the Palestinian leadership’s minimum face-saving needs. This moment of political theater will, in all likelihood, barely scratch the history books.

The interesting part, rather, is how American Jews will take it.

David Hazony is the Executive Director of The Israel Innovation Fund