The Best Way To Fight Anti-Semitism? Remember Our Allies In Other Communities 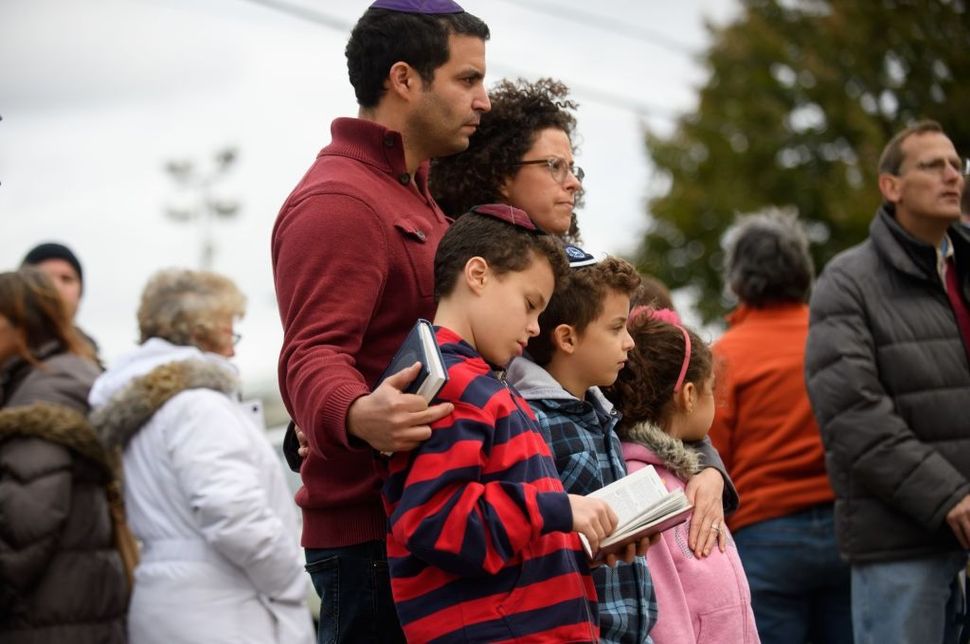 With anti-Semtism raising its dark head in America, Jews must be strong and learn how to face it. Image by Getty Images

It’s hard to read the news these days without encountering evidence of a significant rise in anti-Semitism. Defaced gravestones in France. A Belgian carnival float featuring puppet caricatures of ultra-Orthodox Jews. Here in the US, protesters in Charlottesville, Virginia, chanting “Jews will not replace us.” And, of course the continuing specter of the shootings at the Tree of Life synagogue in Pittsburgh.

What’s going on? Should Jews be worried in this country, as many are in Europe? We need to step back from the near-daily barrage of incidents and think seriously—as we have not in some time—about the renewed and age-old practice of singling out Jews for attack.

Even as a child I knew that the power of the Passover story lay in the fact that it was true. Jews had been persecuted, expelled, and killed time and again over the course of history. Just 10 years before the first Passover Seder I remember, Jewish children like me had been killed by the Nazis alongside their parents.

I felt safe in America, but I could not help being concerned about anti-Semitism. Several members of our synagogue had numbers tattooed on their arms. My grandparents had come to America because of anti-Semitic persecution by the Tsar. I had indirectly encountered anti-Semitism firsthand, when accompanying my salesman father on business calls to golf courses. He could not join some of those clubs because they did not admit Jews as members. We entered their grounds through the back door.

A lot has changed for Jews and other minorities in America over the past 50 years, thankfully. Overt prejudice against Jews has dipped to all-time lows. Such outright anti-Semitism as remains seemed until recently to be a function of Arab and Muslim opposition to Israel and of related protest by some on the “left” against Israel’s alleged “colonialism” or “apartheid.”

“The Jewish community needs to remain vigilant,” I said to anyone who asked my views in recent years, “but we should also count our blessings.” This was not the 1930s. Jews could rest easy at our Passover Seders. Pharaoh’s minions were not about to strike us. As the old joke put it, “What is the meaning of Jewish holidays? They tried to kill us. We won. Let’s eat.”

It’s much harder to laugh at that joke today: hard to say, for all the success and safety Jews enjoy in 21st-century America, that “we have won” out over anti-Semitism. The United States remains a very different place from Europe, historic breeding ground of Jew-hatred that is seeing a dramatic rise in anti-Semitic incidents.

But with a 57% increase in anti-Semitism in America in 2017, there is ample cause for wariness — and for determined action to strengthen defenses of our people and our institutions at the same time as we shore up alliances between Jews and non-Jewish allies.

What shall we do — and not do? Three lessons are to my mind especially crucial for understanding the prejudice against Jews and calibrating the most effective Jewish response.

First: as always, hatred of Jews — whether from the “left” or the “right” — has multiple causes, and so must be addressed on multiple fronts.

One venerable element in the modern arsenal of anti-Semitism, sounded loud and clear again in recent months, is economic resentment of Jewish influence, prominence, and success in business and finance. Jews are blamed for the ills of capitalism as well as by some on the opposite extreme for supporting socialism and other forms of government regulation.

A related form of anti-Semitism is political: Jews are alleged to wield too much power, or to wield it secretly or mysteriously; we are said to maintain “dual loyalties” to America and Israel, or America and the Jewish people.

Religion continues to interact with these themes. To some white nationalists, America is a Christian country; Jews, like Muslims, cannot legitimately claim equal citizenship.

None of these age-old arguments is likely to go away any time soon. It is important for both Jews and non-Jews to recognize them and their expression in classic images and tropes. It is urgent that we understand how to answer them — and teach our children they are false.

Second: We must not allow Jews to be blamed for anti-Semitism, as was so often the case in the past. In the 1930s, 1940s, and beyond, it was not unusual to hear anti-Semitism traced to biblical claims of “chosenness” or to Jewish “clannishness” or “exclusivity.”

At the same time, Jews need to remember that they have good friends and dependable allies in other communities. We need to stand in solidarity against those who trade in hate and prejudice. We must always respond firmly to verbal or physical attacks — and do so in measured fashion.

Third, rabbis, educators, and other Jewish leaders need to do our best to make sure that Jews do not run from Jewish commitment, or seek to hide their Jewishness, lest they become targets. By the same token, we should not allow Judaism to be regarded merely as a way to foil the anti-Semites. Jews should not choose Judaism in order to spite our enemies. Anti-Semitism must not stand at the center of Jewish belief and practice.

In spite of today’s challenges, America remains the greatest diaspora Jews have ever known. There is so much to celebrate, so many reasons for pride, so much community and meaning to be had from Jewish life. The joy and profundity offered by Judaism are the strongest defense against anti-Semitism one can imagine.

Arnold M. Eisen, Ph.D. is an American Judaic scholar who is Chancellor of the Jewish Theological Seminary in New York.

The Best Way To Fight Anti-Semitism? Remember Our Allies In Other Communities