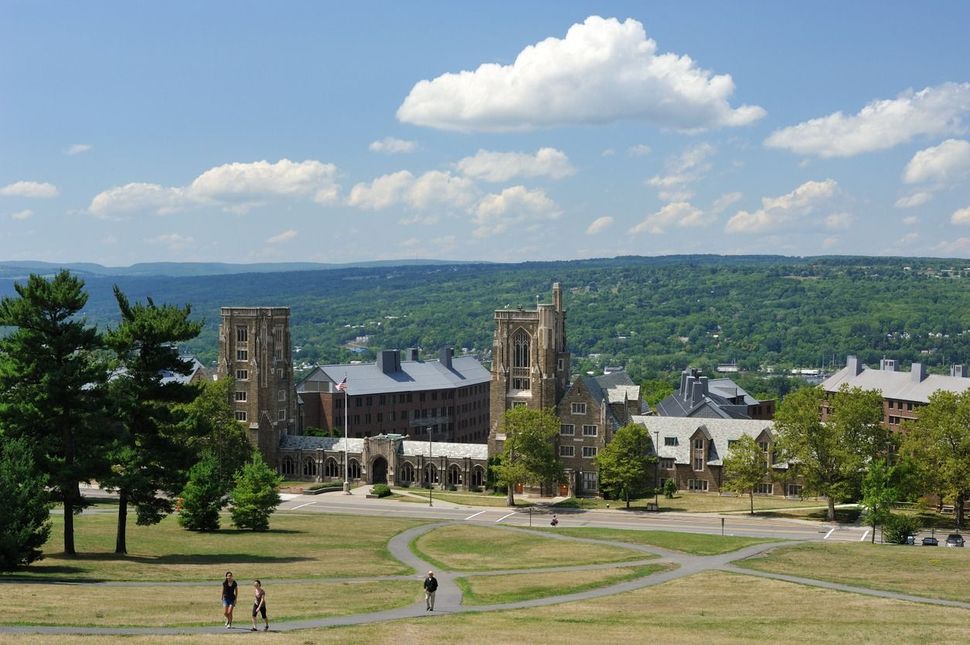 When Cornell’s chapter of Students for Justice in Palestine announced its boycott, divestment, and sanctions campaign against Israel at Cornell University where I am a rising senior, an atmosphere of fear developed among the Jewish community. A similar BDS push failed at Cornell in 2014, and it was inevitable that it would come back. Still, the effort left us Jewish students feeling worried, even sacred.

But by the end of the campaign, I realized that some good had come from one of the most stressful three months of my life. For in our attempts to organize to defeat the BDS campaign, the Jewish community on campus found its voice. In other words, it totally backfired.

At the beginning of the 2019 Spring semester, SJP renewed its call for BDS on social media. The announcement called the 2014 failure of BDS at the Student Assembly a “sham vote” and accused Israel of “embracing fascism,” among other allegations. During the course of their three-month BDS campaign, SJP accused Chabad at Cornell — an apolitical organization — of “shady politics,” used imagery from the Popular Front of Liberation of Palestine terrorist organization to advertise an event, and demonized Israel at every turn.

But this call didn’t just alarm the pro-Israel community on campus. It woke us up from a daydream-like state of malaise and relative inaction. It mobilized hundreds of Jewish students on campus to attend student assembly meetings, to make pro-Israel and anti-BDS posters, and learn about the Israeli-Palestinian conflict.

Never before had I seen such a diverse group of Jewish students — male and female students, nerds and frat boys, gay and straight, rich and on financial aid — coalesce and stand together behind a single cause. The Hebrew phrase “kol Yehudim arvim ze-la-ze” — all Jews are responsible for one another — felt true for perhaps the first time in my life.

There were, of course, also Jews on SJP’s side. One even quite horrifyingly used the memory of his grandfather’s family, who tragically perished in the Holocaust, to advocate for BDS. This, too, backfired; the Jewish students I worked with were disgusted by the use of the Holocaust to further the BDS cause. “I was extremely disturbed by SJP’s manipulation and distortion of the Holocaust as part of their divestment campaign,” Avraham Spraragen, a Jewish student at Cornell, told me. “The Cornell Jewish community faced months of Holocaust revisionism that minimized the crimes of the Nazis and dishonored the victims.”

Others were upset by the hyperbole. “SJP is willing to use any means necessary to connect their message to known world tragedies such as ‘Apartheid’ and ‘Holocaust’,” Adam Shapiro, another Jewish student at Cornell, added. “Attaching false well-known terms to Israel is their way to connect to people in order to smear and delegitimatize the only Jewish state in the world.”

This anger at the ugly campaign translated into a powerful moment for our community.

And it changed my life on a personal level, too. Prior to the BDS movement’s attempt to coopt my campus and delegitimize my people, I was just another stressed out pre-med student paranoid about his grades and CV. During the BDS movement, I transformed, writing opeds, debunking incorrect information, meeting with my representatives from the Student Assembly, and persuading them of the cause of truth and justice.

I was amazed at my personal success convincing one particular assembly member, a freshman at Cornell who had almost no prior knowledge of the Israeli-Palestinian conflict. I presented him with the facts and history, and provided counterpoints to the arguments proponents of BDS had been making. This representative told me a few days later that he met with the BDS activists and challenged them with the facts. He became convinced of the truth in the pro-Israel and anti-BDS cause when the activists had, effectively, no satisfactory responses to the facts I had provided.

We won. And we did it with our grit, our arguments, and the power of the truth. Resolution 36, the BDS resolution, was introduced as a “sense of the body” motion. This meant that the undergraduates in attendance at the vote collectively received two votes, in addition to the 28 voting assembly members. During the vote, when the pro-BDS activists saw that the Israel supporters outnumbered them, they tried to change the resolution to remove the audience vote. They failed, and we thankfully won 15-14, with 1 abstention.

Being Jewish and pro-Israel at Cornell has many challenges. But I will not let BDS activists and anti-Semites define my university experience. The Jewish community has emerged stronger from the BDS fight, and we are not going to let the bullies and haters win.

Josh Eibelman is a senior at Cornell University