Give Trump The Benefit Of Doubt – You Give It To Democrats All The Time. 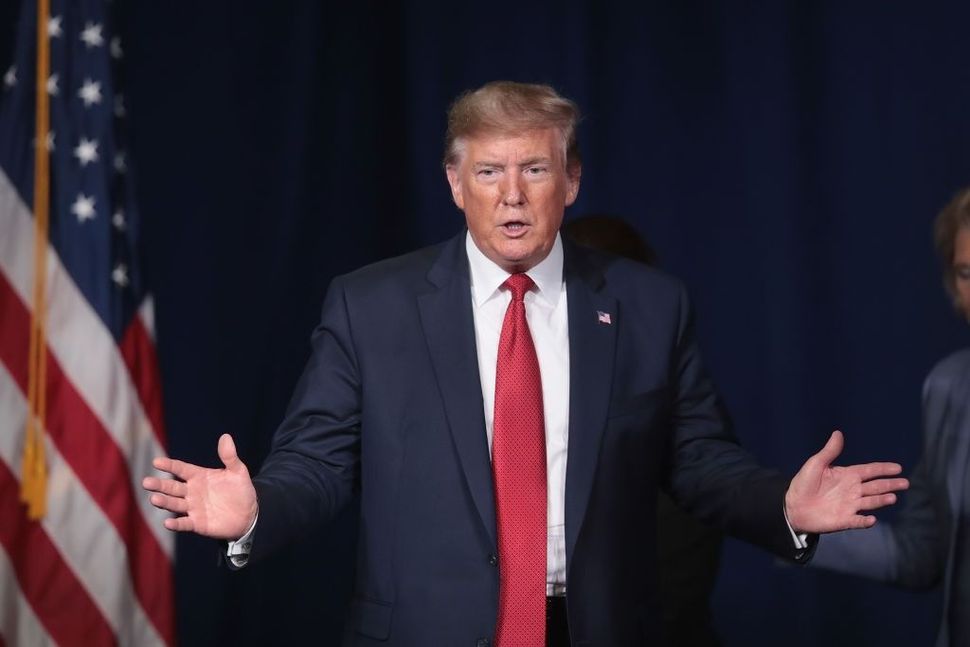 On Tuesday, President Trump called American Jews who vote for Democrats disloyal. “I think any Jewish people that vote for a Democrat; it shows either a total lack of knowledge or great disloyalty,” he said. On Wednesday, he repeated the claim, explaining that a vote for Democrats, which is where 70-80% of American Jews place their vote, means “You’re being disloyal to Jewish people and you’re being very disloyal to Israel.”

Let’s get the obvious out of the way first: “Disloyal” was the wrong word. Even if President Trump has Jewish grandchildren and even if Israelis love him, it is hard to speak of loyalty to a tribe to which one does not belong. He could have said “lack of forethought” or called it “illogical,” but disloyal was a poor choice.

But there is something else equally obvious: Trump’s remark cannot be linked to the ancient trope of Jewish disloyalty to the countries in which we reside. That is indeed a classic slander, as Rep. Ilhan Omar of Minnesota recently reminded us.

But whether particular Jews are acting against true Jewish interests is not at all the same question, and when one considers the President’s comment, this is the only form of “disloyalty” that fit the context.

Even those unwilling to grant him the benefit of the doubt should at least contemplate the rest of Trump’s statement as well: “I can’t believe we’re even having this conversation. Where has the Democratic Party gone? Where have they gone, where they’re defending these two people over the State of Israel.”

Trump is absolutely correct. And no one should find this more disturbing than Jewish Democrats; that some prefer to twist Trump’s word choice than address the real issue is deeply troubling. It should frighten us that support for Israel could be perceived as partisan, and frighten us still more that Israel, in this discussion, is used as merely a fig leaf.

How right Trump is in his characterization of the Democrats became clear over the past week. On Saturday night, Batya Ungar-Sargon, Opinion Editor of the Forward, tweeted that both Omar and Rashida Tlaib (D-MI) had shared an obviously anti-Semitic cartoon with their combined 1.2 million Instagram followers. This cartoonist’s work was so virulent that a previous offering won an award in an Iranian “Holocaust cartoon” competition. A day earlier, the Forward’s Aiden Pink noted that the organization arranging Tlaib and Omar’s “Palestine” junket previously published an article claiming that Jews use Christian blood in Matzah. Most Ashkenazi Jews have ancestors who died due to that lie.

There was also the handling of Tlaib’s on-again, off-again visit to her grandmother.

While denying Tlaib and Omar entry, Prime Minister Netanyahu broached the prospect of a personal, apolitical visit for Tlaib to see her family. This she immediately requested, especially as her grandmother is in her nineties and “this could be my last opportunity to see her.” She herself pledged to “respect any restrictions and will not promote boycotts against Israel during my visit.”

Clearly Tlaib believes the nonsense that she and Omar have been spreading, because she was apparently shocked when Israel agreed. She then flip-flopped, rejecting the same “restrictions” to which she agreed—that she not advocate for Israel’s demise while visiting Israel—as “oppressive and racist.”

To date, not one of her Democratic colleagues has pushed back against any of this. None have pointed out that first-world countries routinely deny access to foreign nationals for reasons far more innocuous than promoting that country’s destruction. None protested the hypocrisy of claiming Israel’s behavior is not that of an ally, when the Obama Administration twice refused visas to a member of Israel’s Knesset.

On the contrary, House Majority Leader Steny Hoyer declared it “outrageous” not to allow the Congresswomen to visit Israel, despite an itinerary that acknowledged only “Palestine.” He mis-portrayed the expectation that Rep. Tlaib not take advantage of Israel’s humanitarian gesture, implying a “restriction” against hateful rhetoric was somehow unreasonable. He even castigated Israel for publishing Tlaib’s letter to explain their reversal. He only condemns Israel, despite Tlaib and Omar engaging in openly anti-Semitic activity and seeking Israel’s destruction.

In the end, the only duo Democrats deemed fit for denunciation in all this were Israel’s Ambassador to the US Ron Dermer, and US Ambassador to Israel David Friedman. Both are Jews.

There is more. Despite frequent charges that President Trump is a racist or anti-Semite, we have yet to hear him praise actual bigots. But Elizabeth Warren, Kamala Harris and Joe Biden all described Rev. Al Sharpton as fighting for justice and civil rights, despite his role inciting anti-Semitic violence during the Crown Heights pogrom of 1991 and the arson of Freddie’s Fashion Mart in Harlem four years later. None of their Democratic opponents have noted, much less condemned, the gross insensitivity to Jewish lives and safety inherent in that praise of Sharpton.

The safety of Jews, whether here or in Israel, should never be deemed partisan. That is incredibly dangerous, and the fact that the President used the word “disloyal” is no excuse to avoid the issue.

All Jews must feel the obligation to challenge and call out anti-Semitism, wherever it is found. And it is left-wing Jews, more than anyone, who have a responsibility to ensure that Democrats never take Jewish support for granted.

Rabbi Yaakov Menken is Managing Director of the Coalition for Jewish Values.

Give Trump The Benefit Of Doubt – You Give It To Democrats All The Time.