The Jewish establishment once expelled communists. Now Jewish socialists are having the last laugh. 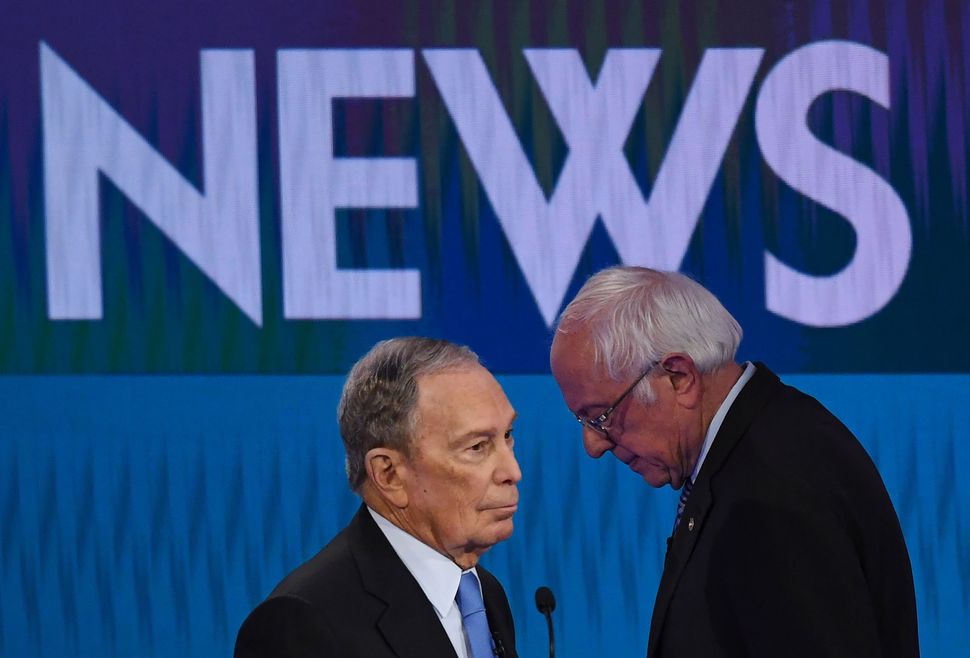 Despite the fact that Wednesday’s Democratic debate in Las Vegas was the first debate to feature both Jewish presidential contenders, the word “Jewish” was not mentioned once. On top of that, neither Vermont Senator Bernie Sanders nor former New York City Mayor Mike Bloomberg took the opportunity to discuss their very different relationships to their American Jewish identities, and how it has affected their politics.

But make no mistake: There was still a very Jewish moment in the debate, and it was a moment that shows just how much and how little Jewish politics has changed in the past decades. Facing allegations from other candidates that he is spending his unimaginable fortune to essentially buy himself the presidency, Bloomberg defended himself by saying he didn’t inherit his money but made it. The implied contrast with Donald Trump was obvious; While the current president inherited most of his wealth, he himself supposedly started from nothing, worked hard, and earned his money the old-fashioned way, making his wealth more legitimate than Trump’s.

But Bernie Sanders, the other Jew on stage, had a ready response: He denied that Bloomberg actually earned his money at all. “You know what, Mr. Bloomberg,” Sanders retorted, to rapturous applause, “it wasn’t you who made all that money. Maybe your workers played some role in that, as well.”

You know what Mr. Bloomberg, it wasn’t you who made all that money, maybe your workers played some role in that as well. #DemDebate pic.twitter.com/WQngTmejMh

It was one of the bluntest and most unabashed articulations of Marx’s labor theory of value that we’ve ever seen in American politics.

Of course, the argument over whether labor or management generates most of the wealth of a company is not a uniquely Jewish argument; in fact, it’s one of the central debates in economic theory. But it is a debate that has divided the American Jewish community for decades, and in fact played a significant role in the making of modern American Jewish identity.

Fears of a public association of Jews with socialism and communism defined mainstream American Jewish political life throughout the past century, and led to many of the political decisions made by prominent American Jewish organizations. It is well known that Eastern European Ashkenazi Jewish immigrants were disproportionately represented in leftist groups in the first half of the twentieth century.

The numbers are well-documented. In the 1910’s, the most predominantly Jewish voting districts in New York elected more Socialist Party members to political office than any other area of the United States.

By 1914, at the outbreak of the First World War, Jews comprised fully 15% of the members of the Socialist Party, despite comprising only 3% of the total US population at the time. In 1920, socialist presidential candidate Eugene Debs received 3.4% of the national vote — but a whopping 38% of the Jewish vote.

Perhaps unsurprisingly, the most well-funded organizations of the American Jewish community feared that this disproportionate Jewish representation in left-wing politics would lead to anti-Semitism — a fear that was not unfounded.

They responded by trying to erect a quarantine against socialism and communism in organized American Jewish life. In 1920, the Anti-Defamation League circulated to 500 newspapers around the US a series of articles trying to prove that most American Jews were anti-communist. The widely-read American Jewish Chronicle went further, not only arguing that most Jews were not communists, but implying that communist Jews were not really Jews at all. “If the more prominent local Soviets… have admitted many Jews, it is because these Jews are no longer Jews,” the pamphlet argued.

By the late 1940’s, the American Jewish Committee and the Anti-Defamation League worked to formally expel known communists from Jewish community organizations. As Stuart Svonkin notes in his book “Jews Against Prejudice,” “During the late 1940’s and early 1950’s, with the aid of intelligence provided by the AJC’s Staff Committee on Communism… local Jewish communities severed their connections with various pro-communist organizations.” American Jewish organizations like the ADL and AJC consistently adopted a liberal, anti-communist line, and were active participants in the anti-communist rhetoric of the postwar era.

It was ironic: Because Jews were disproportionately represented in socialist and communist politics in the early twentieth century, post-World War II mainstream American Jewish politics defined itself as explicitly anti-communist in order to combat the fear that anti-Communism would lapse into anti-Semitism.

Bloomberg’s mix of pro-capitalist economics combined with social liberalism is closely aligned with the politics of the post-World War II American Jewish consensus, while Sanders represents a Jewish identity which it was fighting. Bloomberg represents the model that was supposed to have won out, while Sanders represents a model that many organs of the American Jewish community tried to banish. So it isn’t surprising that Bloomberg has been a financial supporter of institutional Jewish organizations, including the Jewish Museum and Hadassah University Medical Center, whereas Sanders’s links to this formal Jewish organizational infrastructure are much weaker.

And yet, here comes Sanders, who says he is “proud to be Jewish,” getting up on stage at a Democratic debate and defending Marxist labor theory to thunderous applause, while Bloomberg gets booed.

It’s enough to make you think that maybe the postwar consensus of American Jewish politics is beginning to crack.

After World War II, American Jewish organizations tried to combat anti-Semitism by purging socialists and communists from organized Jewish life. But it may be the socialists who get the last laugh.

Joel Swanson is a Ph.D. student at the University of Chicago, studying modern Jewish intellectual history and the philosophy of religions. He’s skeptical of any consensus, political or otherwise. Find him on Twitter at @jh_swanson.

The Jewish establishment once expelled communists. Now Jewish socialists are having the last laugh.