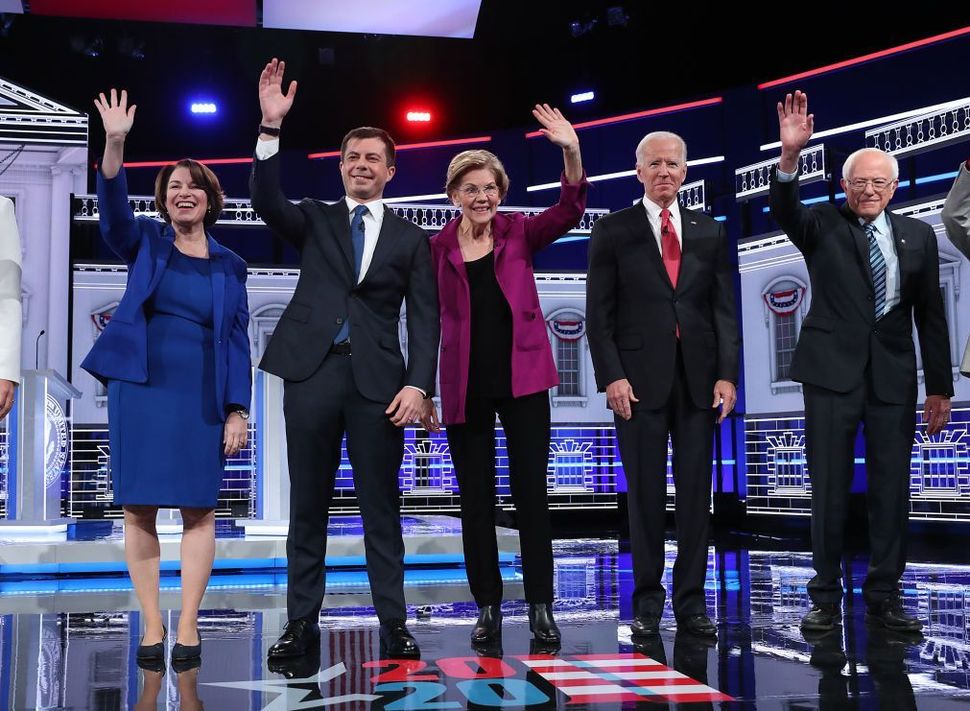 Democratic candidates Amy Klobuchar, Pete Buttigieg, Elizabeth Warren, Joe Biden, and Bernie Sanders greet the crowd at a debate in November 2019. In the next debate, they will be joined by former New York Mayor Michael Bloomberg. Image by Getty

It’s still somewhat unbelievable to many American Jews that two of the frontrunners for the Democratic presidential nomination are Jewish. And ahead of tonight’s Democratic debate, Sen. Bernie Sanders and Mike Bloomberg reminded everyone of their heritage by doing the most Jewish thing imaginable: using their surrogates to take potshots at each other’s coronary health on national television.

You’re probably already familiar with Sanders’ and Bloomberg’s Jewish bona fides. But what about the other Democrats jostling for the chance to face off with President Trump? To guide you in watching Wednesday’s debate, here’s what you need to know about their Jewish links. 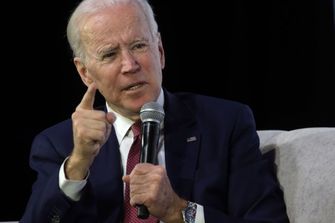 During a visit to Israel on the eve of the Yom Kippur War, he admired then-Prime Minister Golda Meir’s cool demeanor in the middle of a fraught political moment (it’s a story he’s continued to tell ever since.) A decade later, during a meeting with another prime minister, Menachem Begin, Biden banged the table while confronting the prime minister about the expansion of West Bank settlements. Begin seized the moment to chastise him, saying “This desk is designed for writing, not for fists.”

He’s got a handful of Jewish in-laws.

Referring to his daughter Ashley’s marriage to Jewish doctor Howard Klein, Biden told a crowd at a rally, “I’m the only Irish Catholic you know who had his dream met because his daughter married a Jewish surgeon.” Biden’s son Beau also married a member of the tribe, Hallie Olivere; after Beau’s death, Oliviere was also briefly involved with the candidate’s younger son, Hunter. Most recently, Hunter Biden married Melissa Cohen, a South African Jew, just a month after meeting her. A filmmaker seventeen years younger than her husband, Cohen is vocal on social media about social justice issues and her Jewish identity, and has the word “Shalom” tattooed on her bicep. 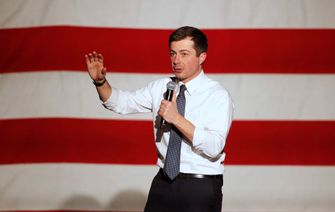 He has a “ballpark synagogue” in his hometown. In 2012, South Bend’s unused B’nai Israel Synagogue was converted into a gift shop for the baseball stadium to which it is adjacent. Blending baseballs and bimas sounds exciting, but more than anything else, this is a sad testament to the city’s waning Jewish community.

He led the pack in terms of Jewish donations. At the beginning of the presidential race, Buttigieg had the most Jewish donors of any candidate, an advantage that some attribute to his “nice Jewish boy” personality.

He posed for pictures at Berlin’s Holocaust memorial. In a 2016 photo taken by his husband Chasten, Buttigieg gazed pensively at the camera while posing in front of the concrete stones at the Memorial to the Murdered Jews of Europe. Buttigieg is far from the first person to slap a Holocaust memorial selfie on social media, but when the photo resurfaced in November 2019, it sparked a storm of online criticism. 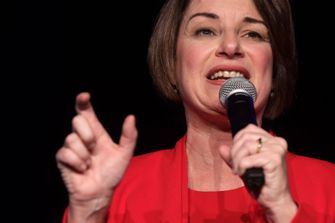 She got her first bike at the JCC. Klobuchar frequently gives remarks at the Minneapolis and St. Paul Jewish Community Centers’ combined benefit. In one speech, she recalled that her father, who played racquetball at the JCC, bought her a bike — a ten-speed orange American Arrow — at the community center’s secondhand sale, which she used to ride 250 miles across the state with him. Framing JCCs as important gathering places for entire communities, not just Jews, she said, “It’s tough to find a Minnesotan who doesn’t have fond memories of their time at the JCC.”

She may not be Jewish, but she’s an honorary member of the Minnesota Jewish community. Early on in her career, Klobuchar was introduced to the Jewish community by one of her mentors, state legislator Gloria Segal. Throughout her career, she has regularly attended events for Jewish groups in her district, and is popular amongst Jews across the political spectrum, according to JTA. In 2018, she chaired the annual meeting between Senate Democrats and Jewish groups, a honor reserved for lawmakers with a close relationship to the community. 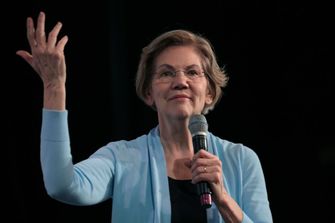 She takes the lessons of the Triangle Shirtwaist Fire to heart.

Warren held a rally in September at Washington Square Park, near the site of a 1911 factory fire that claimed the lives of 146 workers who had been locked inside by management. Warren drew parallels between that grim episode and labor rights in the present day. “Our democracy is paralyzed,” she said. “And why? Because giant corporations have bought off our government.” Many of the fire’s victims were recent Jewish immigrants, and Forward reporters covered the disaster as it occurred. It remains a central episode in both Jewish history and labor history.

She’s made donations to Jewish non-profits. Members of Congress don’t automatically forego their salaries during government shutdowns, but in solidarity with federal employees, lawmakers often donate the money earned to charity. During the 2019 government shutdown, Warren pledged her salary to HIAS, a Jewish group that resettles refugees and vocally opposes President Trump’s immigration policies.

Irene Katz Connelly covers culture and entertainment. You can contact her at connelly@forward.com.