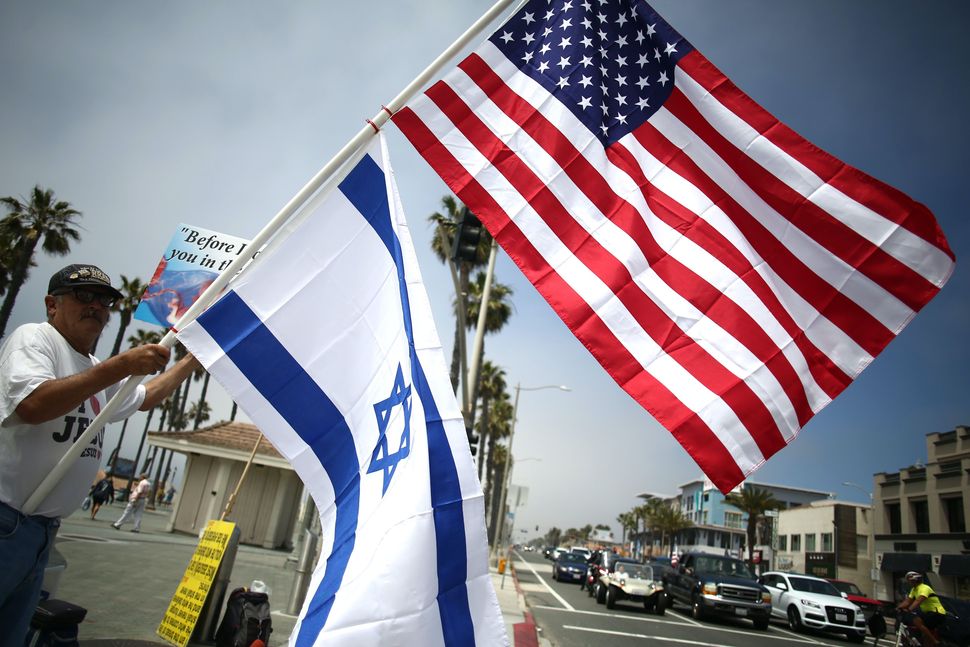 HUNTINGTON BEACH, CALIFORNIA - APRIL 25: A protester waves an American and Israeli flag during the coronavirus pandemic on April 25, 2020 in Huntington Beach, California. COVID-19 has spread to most countries around the world, claiming over 200,000 lives and infecting over 2.8 million people. (Photo by Tommaso Boddi/Getty Images) Image by Getty Images

We’ve entered a new era in terms of the relationship American Jews have with the community organizations that claim to represent us. Last Tuesday, powerful long-time New York Congressional representative Eliot Engel, chairman of the House Committee on Foreign Affairs, was defeated in the Democratic Party primary by political newcomer Jamaal Bowman in a closely-watched election seen by many as a referendum on support for Israel within the Democratic Party. As Abe Silberstein wrote in these pages, Engel had established a record as a “stalwart, uncompromising, unwavering” supporter of Israel in Congress. Bowman on the other hand, despite opposing BDS, has been willing to consider placing limitations on American aid. “Our taxpayer dollars should not be going toward subsidizing settlement expansion, home demolitions, the detention of Palestinian children, or in any way supporting the threatened Israeli ‘annexation’ of the West Bank,” Bowman has written.

Not surprisingly, pro-Israel Jewish groups poured millions into the race to save Engel.

But actual Jewish voters barely seemed to notice: More than 60% of the voters at the Hebrew Institute of Riverdale, an epicenter of Jewish life in the district, chose Bowman over Engel.

I got these tallies back from poll-closers early last night + knew we were about to surprise the world.

Pictured: results from Yonkers MS (our base Af-Am turf) & Hebrew Institute of Riverdale (where Engel calls himself the mayor + sent 20 mailers painting Jamaal as anti-Israel). pic.twitter.com/nUgcjz76si

It was not the only sign last week of a shift in the American Jewish community. On Thursday, the American Jewish Committee, perhaps the purest embodiment of the nonpartisan American Jewish institutional establishment, published their response to Israel’s planned annexation of portions of the West Bank. It was a remarkable text. Written by Jason Isaacson, AJC’s Chief Policy and Political Affairs Officer, the piece was entitled “We’ll defend annexation if needed – but here’s the thing.” In it, Jacobson acknowledges that annexation will “exact a price… borne in the trajectory of Israel’s relations with Arab states” and “in the erosion of Israel’s longstanding claims against Palestinian unilateralism, in breach of Oslo Accords promises.” And yet despite acknowledging this high price, the piece promises that even after annexation, AJC will “do what it has always done: explain Israel to the wider world.”

The AJC OpEd, like Bowman’s victory with Jews, presage the same development. By going all in on defending the state of Israel, even as it contemplates annexing portions of the West Bank without granting citizenship rights to the Palestinians living there, American Jewish establishment organizations are alienating themselves from the majority of American Jews.

And because of this, more and more American Jews are ignoring these groups entirely, so that even as pro-Israel groups spend millions to protect pro-Israel politicians like Eliot Engel, actual Jewish voters increasingly seem not to care.

That’s because most of us differ from our self-appointed community leadership’s approach to this issue. While polls show that a slim majority of Israeli Jews back annexation, American Jews differ dramatically from our Israeli counterparts on this question. Whereas 42% of Israeli Jews believe West Bank settlements like the ones Israel is planning to formally annex are good for Israel’s security, only 17% of American Jews agree.

No one has yet polled American Jews to find out what we think about West Bank annexation specifically. But in 2018, the American Jewish Committee itself found that half of American Jews opposed the Trump administration’s decision to formally recognize Jerusalem as the undivided capital of the state of Israel, a move seen as a de facto endorsement of Israeli annexation of East Jerusalem.

If half of American Jews opposed the US recognizing Israeli annexation of even just the full city of Jerusalem, it’s certainly safe to assume American Jewish opposition to annexation of further-flung parts of the West Bank would be much higher.

The reasons for this opposition are not hard to discern. American Jews, unlike Israeli Jews, are a broadly liberal community. There are more than twice as many self-described American Jewish liberals as American Jewish conservatives, which is roughly the reverse of the American population as a whole. And more than three-quarters of us voted for Democrats in the 2018 elections.

If you’re going to claim to be a liberal, as most American Jews are, the most basic requirement for political liberalism is that you believe in basic civic equality, that all people living in a country should enjoy equal voting and political rights. In a territory in which Palestinians now outnumber Jews according to Israeli army statistics, the only way to preserve a Jewish voting majority is to create an independent Palestinian state in the West Bank. Otherwise, you have a choice between granting equal voting rights to Palestinians, meaning Israel no longer remains a state with a majority of Jewish voters, or denying them voting rights in perpetuity.

There’s a reason why South African-born Israeli journalist Benjamin Pogrund, a personal friend of Nelson Mandela who wrote passionate articles against apartheid in the country of his birth before emigrating to Israel and defending his adopted home against charges of apartheid, recently concluded that annexation without automatic Palestinian citizenship rights “will be apartheid. And we will merit the charge.”

At some level, American Jewish establishment organizations know that. They know that after annexation, Israel will cease to be a liberal democracy in any meaningful sense. That’s why even the AJC, which has pledged to defend annexation, concedes it will exact a price borne “by the Palestinians themselves, their opportunities and movement perpetually restricted, consigned to citizenship of no land.”

Their commitment to defending Israel in the face of this injustice shows how great is the wedge between the majority of American Jews, an overwhelmingly liberal community which opposes annexation, and the organizations that claim to represent us.

The next time pro-Israel American Jewish organizations ask us to weigh their opinions in an election, as they did in the recent Eliot Engel-Jamaal Bowman election, they may find the same thing that they found last week: Most of us just aren’t listening to them any longer.