About double standards, antisemitism, and Israel 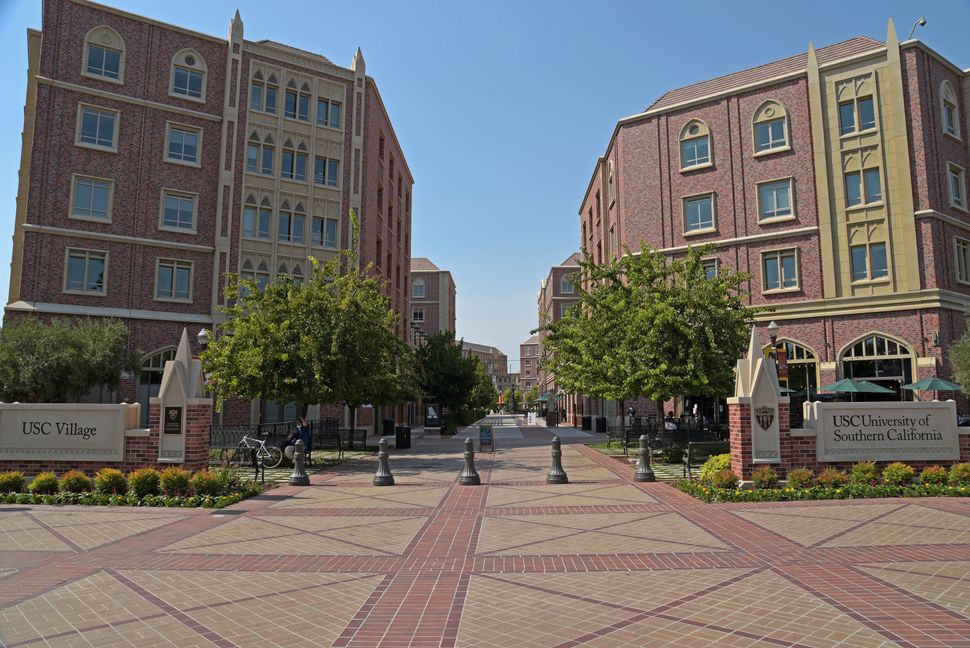 LOS ANGELES, CALIFORNIA - AUGUST 17: USC Village stands nearly empty during the first day of the fall semester at the University of Southern California on August 17, 2020 in Los Angeles, California. Like many universities across the country, USC is holding classes entirely remotely due to COVID-19. (Photo by Michael Tullberg/Getty Images) Image by Michael Tullberg/Getty Images

Was there a double standard in the controversy at the University of Southern California that led to the resignation of a Jewish student leader, Rose Ritch, after a spate of online harassment targeting her as a Zionist?

Bari Weiss, who publicly resigned as a New York Times Opinion writer and editor this summer, was just the latest to suggest so, as part of a widely read essay published in Tablet last week. But Weiss, who also said she was subjected to antisemitism at The Times, is wrong about Ritch — and she gets it wrong in a way that’s emblematic of a broader misunderstanding about double standards, Israel, and antisemitism.

We are part of a task force at USC researching the question of double standards as they relate to issues at the nexus of Israel and antisemitism.

The current conventional wisdom holds that it is antisemitic to apply a different standard to Israel than to other countries. But this definition seems too broad to be useful. So we dug deeper.

Our task force agrees that paying disproportionate attention to Israel does not, on its own, amount to antisemitism. Some people may pay more attention because Israel has a special relationship with the United States, others for religious or geopolitical reasons, and there is nothing wrong with that either.

What is antisemitic, in our view, is treating Israel with different standards than those applied to other countries because it is a Jewish state. That is when we find the line is crossed, and demonization can occur.

We can usually tell when a double-standard is rooted in hate and prejudice against Jews. We can hear the antisemitic tropes or see how Jews are denied the right to identify as a people and express their right to national self-determination.

Which brings us back to the case of the Rose Ritch.

In February, Ritch was elected vice president of USC’s Undergraduate Student Government. In the wake of the national reckoning on racial injustice following the murder of George Floyd, an Instagram account “@black_at_usc” surfaced, accusing the student-government president, Truman Fritz, of “microaggressive behavior toward Black students.” A petition began to circulate calling for him to resign along with Ritch, who had not publicly disavowed Fritz and, critics said, had not been sufficiently pro-active on racial issues.

A member of the Black Student Assembly, Abeer Tijani, sent the petition in an email to Fritz that included an accusation that Ritch “has been outspoken on issues that alienate Palestinian Trojans,” using the nickname for USC students.

Then Tijani posted screenshots of her email to social media, leading to a barrage of derisive and crude remarks about Ritch’s Zionist identity, which Ritch has said publicly is a significant part of her Jewishness.

Some of these online remarks were indeed antisemitic. A retaliatory and similarly hateful social media offensive was subsequently launched at Tijani by people who painted her as an antisemite.

And as this was unfolding, another online storm was brewing on campus involving other student leaders who engaged in racist and Islamophobic online behavior. Two student leaders in that controversy succumbed to demands that they resign amid a social-media firestorm.

So was Ritch subjected to a double standard because of her Jewish identity? Not that we can see.

Yes, Tijani mentioned in an email and social post that Ritch was “outspoken on issues that alienate Palestinian Trojans.” But she made no mention of Ritch’s Jewishness, and the formal charge that Tijani eventually submitted against Ritch and Fritz did not make any reference to anyone’s identity as a Zionist, Jew, Palestinian, or Muslim.

Some of the students who harassed Ritch are no doubt guilty of antisemitism. The online inferno swirled with antisemitic speech, along with racist and anti-Palestinian speech.

Online harassment is an equal-opportunity intimidator. It has no standards. Ritch was attacked for her identity. So were Black, Palestinian, and other USC students. As The Los AngelesTimes observed, both Ritch and Tijani “became targets of relentless, supercharged social-media attacks they had unwittingly touched off.” These ugly attacks reflected a lack of knowledge, information, and understanding on both sides.

Which brings us back to Weiss. Weiss seems convinced that Ritch’s impeachment proceedings reflected a double standard; that she was treated differently because she is Jewish. In the Tablet article, Weiss suggests why she believes something sinister must be at play when a Jew is treated differently: “By simply existing as ourselves,” Weiss writes, “Jews undermine the vision of a world without difference.” And: “The things about us that make us different must be demonized, so that they can be erased or destroyed.”

Jews are indeed different, but so are Mormons, evangelicals and Hutterites — and Uighurs, Rohingyas, Native Americans, and Muslims. All these groups are demonized at times. In the best of times, we learn from each other and admire each other’s differences. We even argue with each other over our differences. Sometimes, people are afraid of differences and, yes, sometimes people hate others for being different.

There are many reasons Jews may be treated differently, and only some have to do with antisemitism.

Our differences do not automatically make us targets for hate. They also make us recipients of admiration and appreciation as well as disagreement and debate. That’s not a double standard — that’s the standard that governs human relationships.

Jonathan Jacoby is the Nexus Task Force Director at the Knight Program of the USC Annenberg School.

Diane H. Winston is the Knight Chair in Media and Religion at the University of Southern California and Chair of the Nexus Task Force.

This article is based in part on research conducted for the Nexus Task Force by Sarah Brown, who recently earned a master’s in journalism from USC and now is an intern at the Forward.

About double standards, antisemitism, and Israel