A TikTok Hanukkah miracle — and your weekend reads 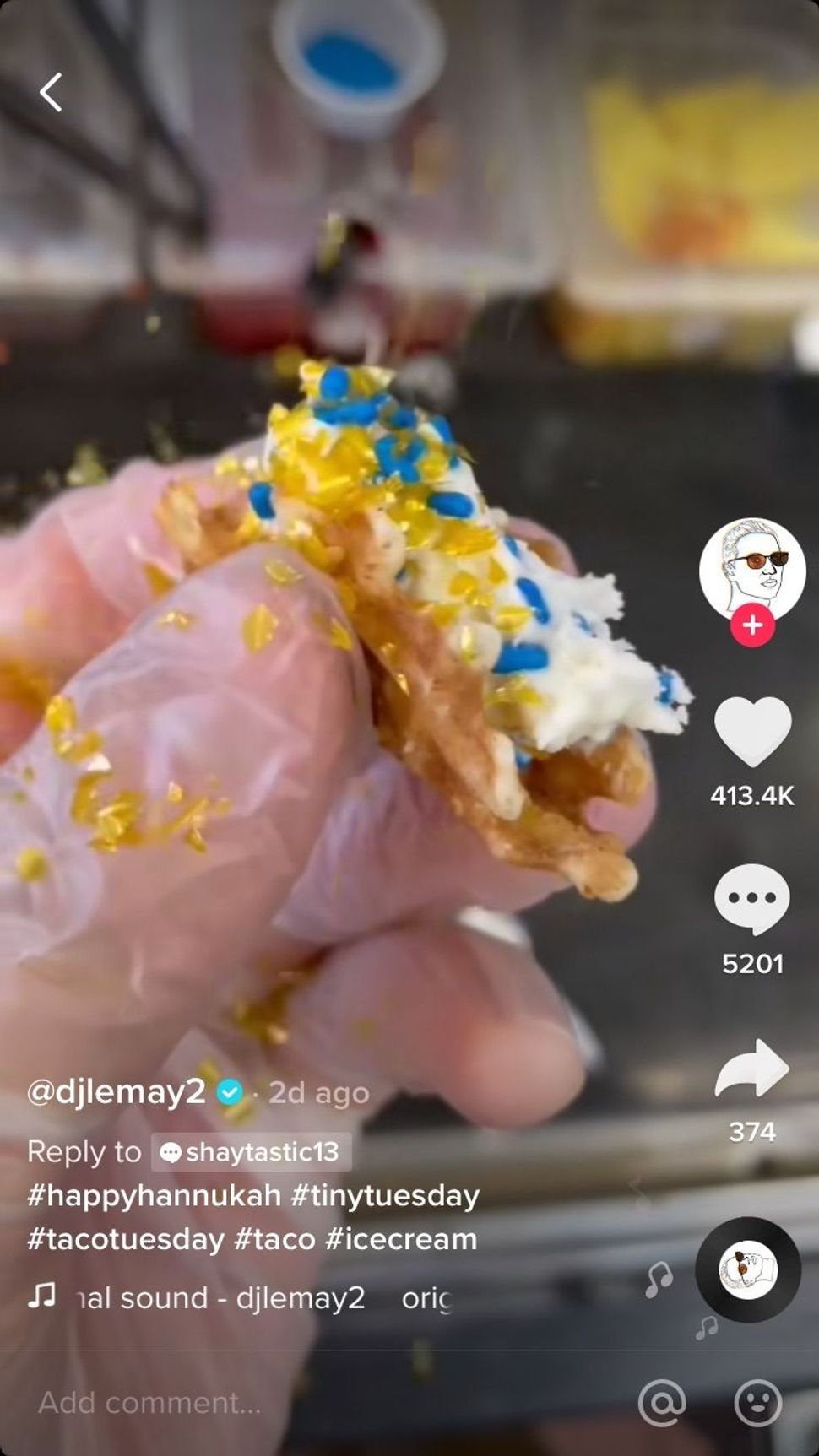 This is a story about everything and nothing, and it happened right here in my house but also around the world. It’s about nothing: seconds-long looped videos about tiny cupcakes and ice-cream tacos. And everything: art, politics, youthful curiosity, the power of celebrity, Middle East politics, antisemitism, pluralism. You guessed it: it’s a story that only exists on social media.

It started 10 days ago, when Dylan Lemay, the 24-year-old manager of a Coldstone Creamery franchise in Springfield, Missouri, posted a video for “Tiny Tuesday” of himself putting green frosting around cotton-candy ice cream atop a tiny cupcake to look like a Christmas. On TikTok, Lemay is @djlemay2, and has 7.4 million followers.

One of those millions is my 13-year-old daughter, Shayna, or @shaytastic13, who posted a comment, asking “R u gonna do anything for Hanukkah?” And it was @shaytastic13 who @djlemay2 showcased a week later, when he posted a Hanukkah video as a “reply” to her comment.

“Could you please give me a summary of what exactly Hanukkah is?” Lemay asks his vast audience in the looping video, as he mixes blue sprinkles into sweet-cream ice cream, tucks it  into a tiny taco he made out of waffle-cone, and tops it with edible gold glitter. ”Because, if I’m being honest, I don’t know much about Hanukkah, but many of you have been asking me to make something for Hanukkah.”

That video has been viewed more than 2 million times so far. Both the Christmas and Hanukkah videos engendered thousands of comments. Some are ugly, like the one that just said HARAM, to which @shaytastic13 replied, “pls explain yourself,” which prompted the response: “Jews are haram haram means bad or like sad kind of jews are bad,” which lacks more than punctuation. (“Haram” is actually Arabic for forbidden and generally used to refer to things particularly prohibited by Islamic law.)

But plenty of others are as sweet as any Coldstone creation.

“I’ve heard people say Hanukkah is as if your phone is at 1% and it lasts for 8 more days,” is a particular favorite.

“Jews won a war and to celebrate it they lit a candle,” one follower offered in a simple answer to Lemay’s query. “There was only enough oil to burn for 1 day but it burned for 8 days and we celebrate this.” Another said: ”basically the syrians ravished the temple and outlawed Judaism. convert or die. small group rebelled and won.”

Many people texted, “love from Israel” with varying numbers of exclamation points, and one added, “it’s so rare to see creators support us. mad respect!” And then, from @oneslavgirl2, “happy hanukkah from your palestinian sister.”

Shayna and I spoke to Lemay yesterday. Turns out he grew up Baptist near Detroit, went to a small Bible college in Missouri, and, as he put it, “never had a lot of friends who were Jewish.” 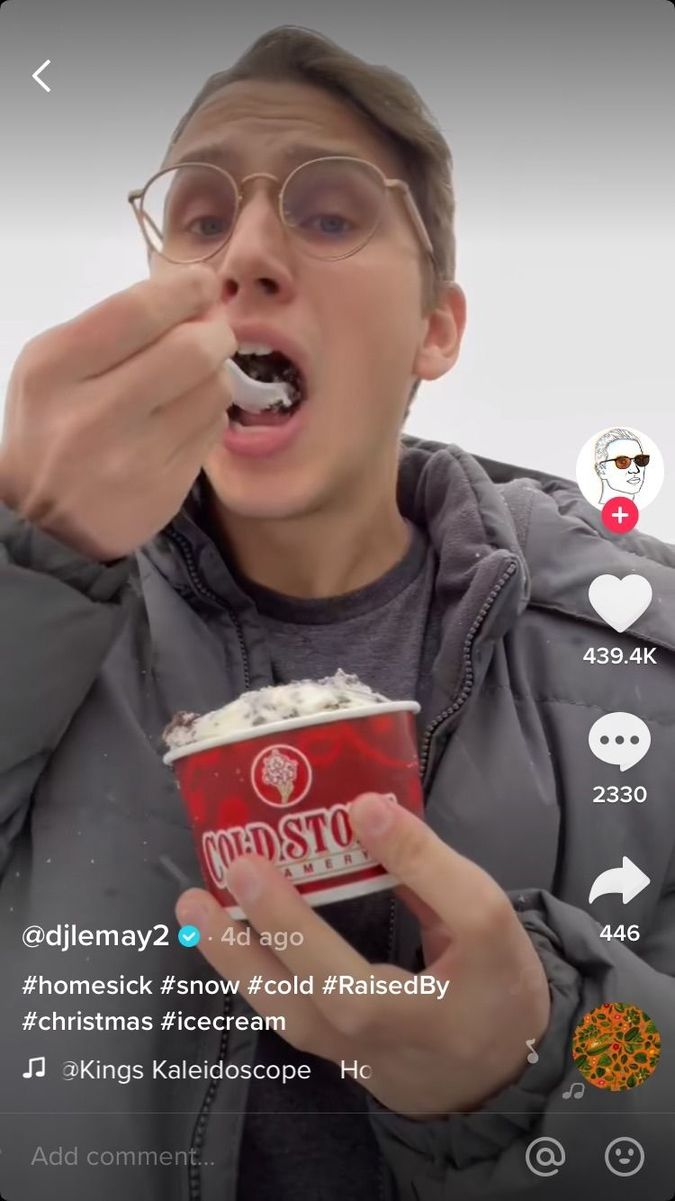 He has been working at Coldstone since he was 15, and even before the pandemic stuck was something of a malaise, having decided he did not want to pursue a career in Biblical counseling, which had been his major. “I was just bored, honestly,” he told us.

Lemay joined TikTok in February, but posted his first cake decorating video on May 4. It quickly hit 500,000 views, which, he said, “was, like, mind-blowing.” Now, his creations routinely reach millions, and generate far more income — TikTok pays creators based on views, but asks them not to reveal how much — than his day job.

“It’s an amazing creative outlet,” said Lemay, who also paints, and makes art with wood and leather. “It’s changed my life for sure.”

Lemay said he quickly figured out what his TikTok viewers crave: his voice, and his loops. “If I don’t talk in a video, people don’t like it,” he explained. “Some people watch me just to hear me talk, which I think is absolutely hilarious.”

My focus group of one, @shaytastic13, says it’s all about the loops — you can never quite tell where the videos begin and end, “The loop is cool because I can’t figure out how to do it,” she told Lemay when we talked. 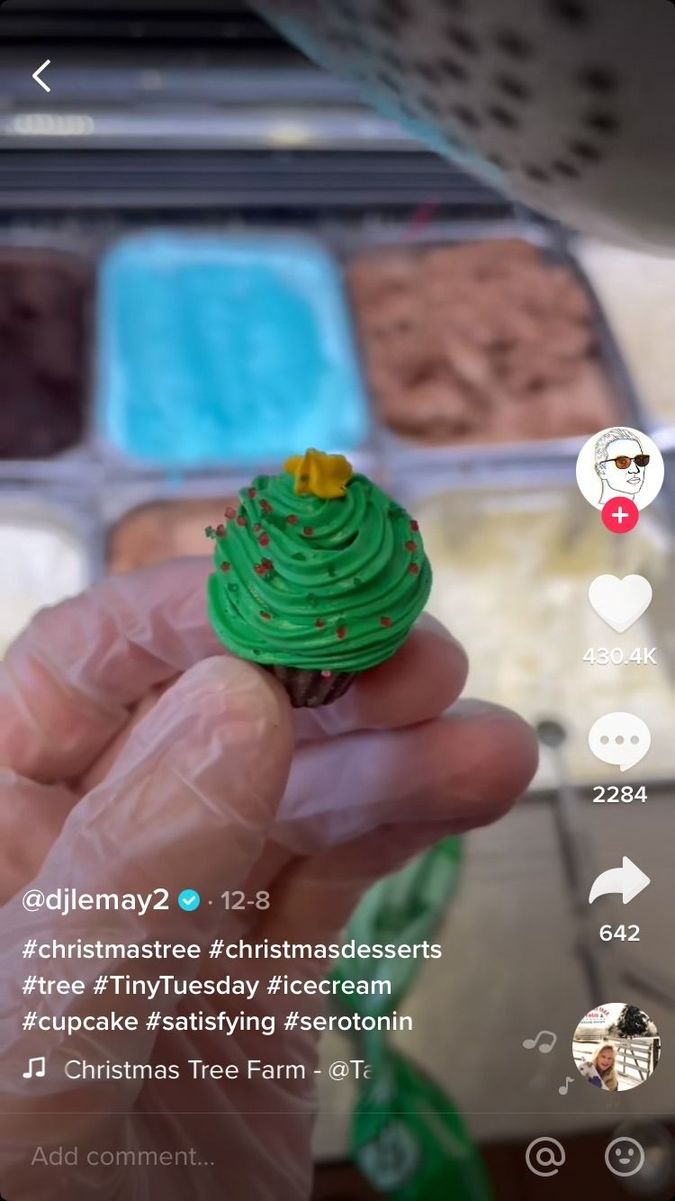 Lemay said he was “kind of shocked” when “it kind of went sour in the comments” on the Hanukkah video, because “typically my comments section is a pretty safe place.” (Welcome to Jewish journalism, Dylan!) But he said he is “so thankful” he did it because “I know it meant a lot to a lot of people” — and that he learned about a lot more than the holiday.

“I was reminded that there are conflicts in the world that aren’t always in the forefront of my mind, but they are to other people,” he explained. “I was trying just to be lighthearted. If I do it again, I’ll definitely put in a lot more research.” Merry Christmas, @djlemay2.

Mistakes, I’ve Made a Few

You may have noticed that you got two copies of our morning newsletter an hour apart on Wednesday, the second one with the word CORRECTION in all caps at the start of the subject line. I am deeply sorry that we mistakenly sent the first with an incorrect subject line suggesting that the Anti Defamation League had disinvited a Muslim leader from a panel on bigotry after the leader published an OpEd in the Forward critical of the ADL. In fact, it was the hosts of the event, the Los Angeles-based groups Jews United for Democracy and Justice and Community Advocates, Inc., who withdrew the invitation to Salam Al-Marayati of the Muslim Public Affairs Council, out of concern that his issues with the ADL — whose chief executive, Jonathan Greenblatt was also on the panel — could derail the discussion.

I strongly disagree with the decision to de-platform Al-Marayati, as I wrote in the editorial that led the Wednesday newsletter, but as my piece said, the ADL did not ask for him to be removed. (We published Greenblatt’s response to Al-Marayati Wednesday afternoon.) I have apologized directly to Greenblatt and did so in Wednesday’s corrective newsletter, but wanted to repeat my apology here, because our credibility is our most important as assets as journalists, and this was an unfortunate and damaging mistake.

I take full responsibility for the error, which revealed a crack in our system that I should have seen earlier — newsletter subject lines are as important as any other words we publish, if not more, and they should be edited just as carefully. We will from now on make sure none go out without at least two sets of journalistic eyes on them.

We heard a few complaints from readers about the incorrect subject line — and a number of compliments for the coverage itself. “You are so even-handed and deeply inclusive in your politics,”  wrote someone named Rosemary S, who said she is 18.  ”I really like the fact that you say ‘we need to listen to everybody’ regardless of what issue it is and what topic and ESPECIALLY for the topics people want to shut each other up on.”

I have invited Greenblatt and Al-Marayati to join me for a Zoom-versation about how Jews and Muslims can continue to work together on civil rights and other issues. Stay tuned for details.

Today was the last day (not) in the office for Ari Feldman, who started as an intern at the Forward in 2016, came back on staff the next year, and has been a pillar of our news team throughout the pandemic.

Ari’s byline topped our award-winning coverage of the antisemitic murders Jersey City last fall, and of the strange saga of the Goodwill Torah. He  also penned the 2020 story you readers voted for as your favorite, about the Orthodox Jews who gave plasma after having Covid-19.

Ari is leaving to cover politics and government for NY1, and we wish him all the best, though we will miss him every day.

At the same time, we are thrilled to welcome Benyamin Cohen, currently editorial director of the website From the Grapevine, as our new News Director, a critical role that aims to maximize the impact and resonance of our journalism with our audience.

Benyamin started his career at the Atlanta Jewish Times and created the webzine Jewsweek before helping develop Grapevine, which covers all things Israel except politics and religion. The son of a rabbi, Benyamin wrote a book called “My Jesus Year” about his 52 Sundays attending 52 churches.

He lives in Morgantown, West Virginia, where his wife teaches media studies at the university, and they have a flock of 14 chickens they call the Co-Hens.

A TikTok Hanukkah miracle — and your weekend reads