Black Jewish partnership in the age of Black Lives Matter 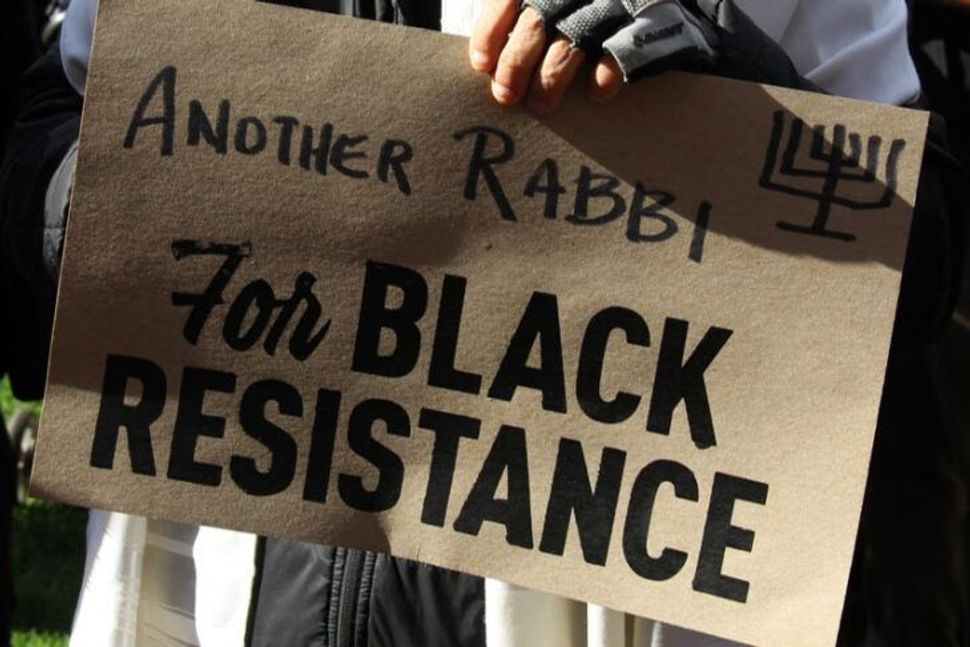 While the truth of Torah is beyond time and space, we are called to live out our faith in a particular, often messy context, such as the Black Lives Matter movement, the civil rights movement of our day. Future generations will look at how we met this challenge, to be true witnesses of a holy God. Our positive witness will be seen and replicated across the globe. Fortunately, the American Black Jewish partnership provides an example of doing this. The civil rights movement consisted of a diverse coalition of participants—communists, Black nationalists, Black power advocates, revolutionaries and Christians, among many others.

There were plenty of reasons for Jews not to become part of the movement. But Jews were more than allies; they were accomplices. They sat in jail alongside their Black friends. They were prophetic as Rabbi Jacob Rothschild was—and even sacrificed their lives for the cause of justice, as Michael Schwerner and Andrew Goodman died alongside James Chaney.

On the Rev. Dr. Martin Luther King’s birthday, it seems right we remember the Black Jewish partnership and commit to finding an authentic way to express our Jewish faith. We are called to live out the truth of Torah—that Black lives matter—in a world where, for many Blacks, they are reminded daily that their lives don’t matter.

Unfortunately, there is a generation of Blacks and Jews unfamiliar with our shared history. Not knowing our shared history makes us vulnerable to repeating antisemitic or racist beliefs and not seeing the relationship between racism and antisemitism. Too many Black activists, athletes and celebrities have had to apologize for comments they made or tropes they repeated, not knowing they were antisemitic. This unfamiliarity results in things such as the 2016 Movement for Black Lives (M4BL) platform on Israel, which has hurt Black Jewish relations.

COVID-19 is accelerating economic and social inequity between Blacks and whites, and even between men and women. Blacks and Jews have common enemies (prejudice, ignorance), shared goals (societal acceptance, social justice) and entwined histories—and we are much, much stronger together.

Jews, who represented 2% of the population, were approximately half of the attorneys involved in the civil rights movement in the South. Blacks and Jews together successfully changed many laws, such as Brown v. Board of Education. Some of this history is well-documented in the movie “Shared Legacies: The African-American Jewish Civil Rights Alliance” by Dr. Shari Rogers. It should be required viewing by all Black activists.

The Black Jewish relationship in America hasn’t been perfect; nothing is. While there were northern rabbis who spoke out against slavery, there were Southern Jews who owned slaves and were involved in the slave trade, as were Christians, as leaders such as Louis Farrakhan are quick to point out. But so were Muslims, a point Farrakhan omits.

In urban areas where Blacks and Jews lived in proximity, James Baldwin and Marcus Garvey recorded the conflicts between Jewish landlords and retailers and Blacks who were residents, employees and customers. Hollywood was largely Jewish and often portrayed Blacks in film in an unfavorable light, and the 1968 New York City teachers’ strike also stoked animosity. To this day, Black Jews often split with their white Jewish counterparts on the role merit and white privilege play in American success and the priority of racism over antisemitism.

The Palestine Solidarity Movement (PSM) was able to make a case for Black and Palestine intersectionality, building on the thinking of Malcolm X, Stokely Carmichael and Angela Davis—and Israel’s previously strong support of apartheid South Africa. This reverberates across U.S. college campuses today, often morphing from anti-Israel into anti-Jewish.

In the “Invest/Divest” section of its 2016 platform, M4BL criticized the U.S. government for providing military aid to Israel. There were other troubling statements, such as its support for The Global Campaign to Delegitimize Israel and support for the boycott, divestment and sanctions (BDS) movement.

Many Jewish groups found these positions offensive and unacceptable. There was immediate condemnation. Other Jewish groups disagreed with the M4BL position but chose to work with them anyway, believing it better for the common good.

In 2020, the M4BL issued a new platform that removed any mention of Israel. That should clear the way for Jewish groups to support the Black Lives Matter civil rights cause, but it alone might not be enough, as the damage was done. Some Jews felt a profound sense of hurt and betrayal.

And as much as there is a message, there is also a context that individuals bring with them. Seeing Sen. Mitt Romney at a BLM march means something different from seeing a Black person in the same march. A BLM yard sign in front of public housing in a Black neighborhood might mean something different in a white suburb. Seeing a BLM yard sign tells me who friends, allies and possible accomplices are for racial and economic justice.

A BLM sign reminds me of the historic communication symbols used along the underground railroad, signaling to escaping slaves whom to trust. If I see a church or synagogue with a BLM sign, it lets me know where they stand. The absence of a BLM sign is not an indication that they don’t care—but the presence of one says they do.

For many, Black Lives Matter is an urgent plea for help, a shofar-like call for action—a call to make our lives matter, as we are literally dying in the street. Further discussions and a lack of action can be seen as resistance to change. To many, those who don’t respond to our humanitarian SOS are not our friends—their silence, inaction and complicity combine to make them our enemies.

What is the path forward? Is it enough that:

When the M4BL was asked why an organization originally focused on the injustice experienced by Blacks in America needed to take such expansive global policy positions, the answer could be found in their platform: “The Black community is a global diaspora and our political demands must reflect this global reality.” And, “Injustice anywhere is a threat to justice everywhere. We are caught in an inescapable network of mutuality, tied in a single garment of destiny. Whatever affects one directly, affects all indirectly” (Rev. Martin Luther King).

To be creditable, we must measure human rights by the same yardstick. For some, Jews should develop their own statement, so they can speak on their own terms—more a human rights declaration in the spirit of Rabbi Heschel, Elie Wiesel and Rev. King than a political agenda. A statement that could be consistently applied, from Ferguson and Palestine, to Yemen and the Rohingya in Burma, to the Uighur re-education camps in Xinjiang, China.

But it’s not about statements; it’s about the work. The question is: Are we living our lives in a way that demonstrates that Black lives do matter, given officer-involved shootings, shorter lifespans and disparate COVID-19 outcomes?

Given Jews’ 100-plus-year partnership with the Black community, e.g. American Jewish Committee, American Jewish Congress and the Anti-Defamation League (ADL), Jews have earned the right to express the Black Lives Matter truth any way that is an authentic expression of their faith. Jeremey Burton, executive director of Boston’s Jewish Community Relations Council, proposes the following framework:

Together, we—Blacks and Jews—have made historic change, and we must do so again. The world and the cause of justice demand it.

Ed Gaskin attends Temple Beth Elohim in Wellesley and Roxbury Presbyterian Church in Roxbury. He has co-taught a course with professor Dean Borman called “Christianity and the Problem of Racism” to evangelicals for over 25 years. Ed has an M. Div. degree from Gordon-Conwell Theological Seminary and graduated as a Martin Trust Fellow from MIT’s Sloan School of Management. He has published several books on a range of topics and was a co-organizer of the first faith-based initiative on reducing gang violence at the National Press Club in Washington, D.C. In addition to leading a nonprofit in one of the poorest communities in Boston and serving on several nonprofit advisory boards, Ed’s current focus is reducing the incidence of diet-related disease by developing food with little salt, fat or sugar and none of the top eight allergens. He does this as the founder of Sunday Celebrations, a consumer-packaged goods business that makes good-for-you gourmet food.

This article was originally published in Times of Israel and JewishBoston.com and has been reposted with permission.

Black Jewish partnership in the age of Black Lives Matter