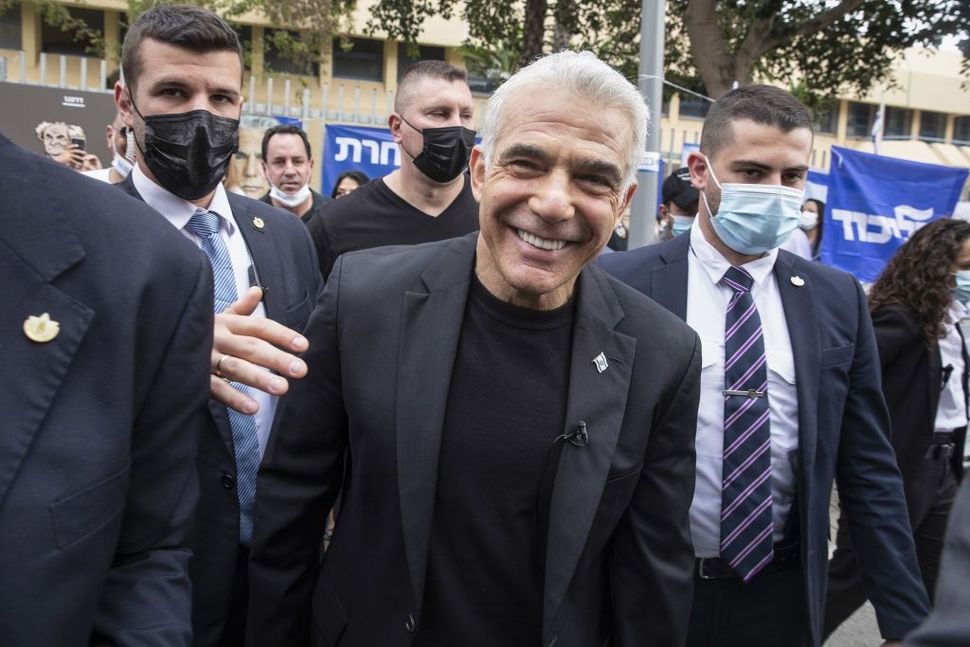 Yair Lapid on March 23, 2021 after casting his ballot in Tel Aviv. Courtesy of Getty Images

This is an adaptation of Looking Forward, a weekly newsletter from our editor-in-chief sent on Friday afternoons. Sign up here to get the Forward’s free newsletters delivered to your inbox. And click here for a PDF of stories to savor over Shabbat and Sunday that you can download and print.

“I’m in no hurry,” Yair Lapid told me when I asked whether he expected to succeed Benjamin Netanyahu as Israel’s prime minister.

No, this was not in the last few days, as Lapid, head of the centrist Yesh Atid party, was handed the mandate to try and form a governing coalition out of Israel’s fractured political map after Netanyahu failed to do so. He said this to me almost exactly eight years ago, shortly after his surprise showing in the 2013 balloting landed him with the fraught role of finance minister.

I was the Jerusalem bureau chief of The New York Times then, and it was Lapid’s first real interview with an international news outlet. He summoned me to an outdoor cafe in Tel Aviv that he used as something of a satellite office, and showed up in his trademark black T-shirt and jeans, though insisted on being photographed separately, in a sport coat and dress shoes, sitting in a regal leather chair with a chess board behind him.

I went back to my notes from that conversation this week as I thought about the latest development in Israel’s hopelessly stalemated politics: the prospect that Lapid would cobble together a government of parties united only by their desire to oust Netanyahu, and possibly even let his longtime frenemy Naftali Bennett take the first turn in the big chair. Apparently he is still in no hurry.

What is there to say, really, about Israel’s politics, other than that they seem to be broken?

Four elections in two years have yet to produce a stable governing coalition. If Lapid can’t broker a deal with a bunch of ambitious rivals who profoundly disagree with him and each other about the fundamental issues, we may well be heading for a fifth. From what’s been said publicly, including a lengthy Facebook post by Bennett a couple of Fridays ago, the working idea now is to agree to disagree — and to not take any action on any of the disagreements, including what to do about the Palestinian conflict, religious pluralism and reforming the justice system.

They’re in no hurry, I guess, though Israelis — and Palestinians — certainly need these pressing issues addressed.

It’s not easy to lead in a fractured landscape. Our own deeply divided country has lately chosen the pendulum approach: Bush-Obama-Trump-Biden, right-left-right-left. Israel, meanwhile, has had the same prime minister for a dozen years, but watched him take increasingly harsh conservative approaches to religion and human rights as he struggled to hang on to power.

Most politicians — and voters — in both places, meanwhile, define themselves as centrists, without a clear sense of what that actually means.

When I met Lapid, a former television journalist, in Tel Aviv that day in May 2013, his approval rating had plummeted to 21%. It was only four months after the election in which Yesh Atid had stunned the world by becoming Israel’s second-largest party, with 19 of the Knesset’s 120 seats, but the headlines said he had gone from “political darling to national whipping boy” and declared his “meteoric rise and fall.”

Much of that decline was because Netanyahu, a wily dealmaker, gave him the always-fraught finance portfolio, making Lapid the face of an austerity budget filled with tax increases and subsidy cuts. He told me his transition to politics had been “painful,” joking, “I used to have so many opinions before I learned the facts.”

“Making hard choices always seems to be mistakes, but these are not mistakes” he said then. “If you want to change a country, you’re going to be bumped now and then.”

Also: “I’m going to be bashed now, and be the beneficiary of this within, I don’t know, a year or a year and a half.”

Not quite. Two years after that first election, Lapid’s star fell significantly when Israelis returned to the polls, with Yesh Atid dropping to 11 seats from 19. Bennett also lost ground in that election — his Jewish Home party went from 12 seats to eight.

The two men had entered Netanyahu’s 2013 coalition as “brothers,” texting each other daily, but downgraded to “cousins” amid turmoil over I forget exactly what. In the four rounds of balloting since 2019, Bennett, who now heads a party called Yamina (New Right), has hovered at six or seven seats, while Lapid — first as part of the Blue & White coalition and this last round on his own — garnered 15, then 13, 13 and finally the 17 he holds now.

Is it enough? To make this unity government idea work, Lapid would have to bring together Arab parties and the ultra-nationalist Yisrael Beiteinu faction; Bennett’s Yamina, which wants to annex the West Bank and the leftist Labor and Meretz, which want to end the occupation. It hardly feels like a recipe for stability.

Perhaps we should not be surprised that Lapid, also wily, would yield the first rotation in the prime minister’s chair to his former brother, Bennett. After all, he’s in no hurry.

Below are some highlights from this week’s Forward. You can download a free, printable PDF of these articles here.