What would happen if the U.S. stopped giving aid to Israel? 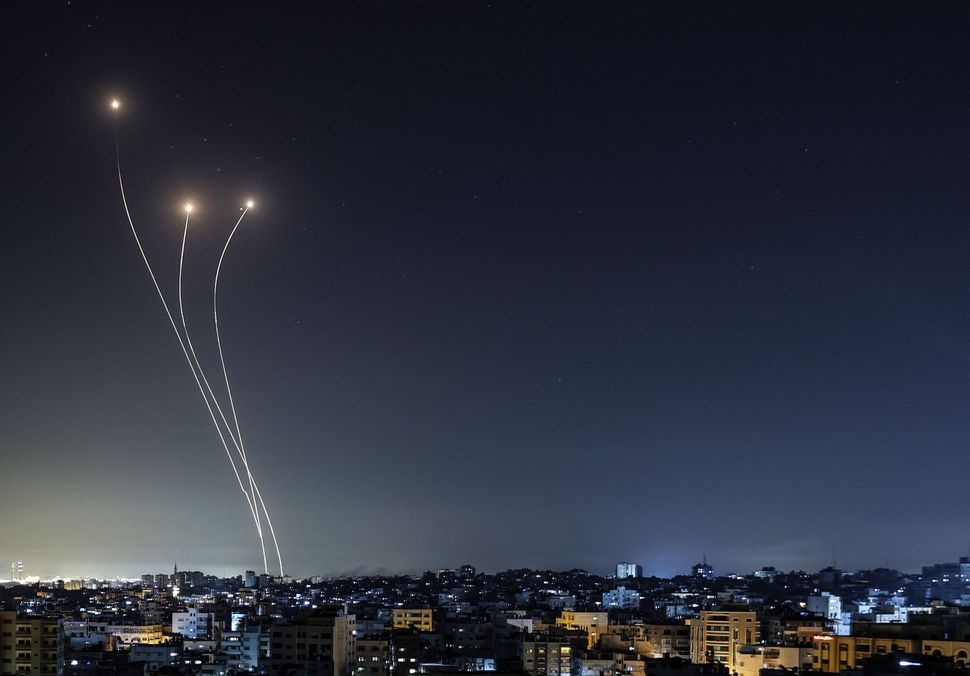 A streak of light appears as Israel’s Iron Dome anti-missile system intercepts rockets launched from the Gaza Strip, early on May 17, 2021, - Israeli warplanes bombarded the Gaza Strip overnight, said witnesses in the Palestinian enclave, from where armed groups have launched rockets into the Jewish state. By Mahmud Hams / AFP via Getty Images

Shortly after becoming Prime Minister for the first time in 1996, in a special address to the US Congress, Benjamin Netanyahu said, “there can be no greater tribute to America’s long-standing economic aid to Israel than for us to be able to say: We are going to achieve economic independence. We are going to do it. In the next four years, we will begin the long-term process of gradually reducing the level of your generous economic assistance to Israel. I am convinced that our economic policies will lay the foundation for total self-reliance and great economic strength.”

25 years later, this week, Netanyahu hosted U.S. Senator Lindsay Graham in his office, where they posed together for a picture in which Graham held a sign reading, “More for Israel.”

Great meeting this morning in Jerusalem with @IsraeliPM Netanyahu.

‘More for Israel’ to help protect and defend from Hamas rocket attacks. pic.twitter.com/1eW112lw9W

At the press conference which followed, Netanyahu praised Graham for his efforts to expand economic assistance to Israel for defense purposes, such as the Iron Dome technology (which was developed thanks to significant support from President Obama’s administration).

While foreign aid to Israel is still the default position for U.S. politicians in both parties, in the aftermath of the last round of violence between Israel and Gaza, it is impossible to ignore that public opinion is shifting away from Israel.

Perhaps for the first time, there is a serious conversation happening about the extent to which America, in order to influence Israeli policy, should condition further economic assistance to Israel (as of today, American military assistance already conditions Israel to use it to buy US-made weapons), or perhaps even discontinue it entirely.

This discussion is a reflection of one of the legacies from the Netanyahu era that will accompany us for a long time: making Israel a partisan issue. Although a Benett-Lapid government will likely be replacing him in just a few days, this conversation about the role and merit of U.S. aid to the country will likely continue long beyond Netanyahu’s reign.

No one should deny the right of American citizens and taxpayers, including American Jews, to question whether and in what form America should continue to economically support Israel’s defense establishment. The fact that several senators and representatives in Congress are voicing these concerns is a reflection of public opinion trends that should not be denied just because they might be uncomfortable.

But let’s not fool ourselves with political narratives. Conditioning or limiting US economic assistance to Israel would not be a game changer for Israel, at least economically. 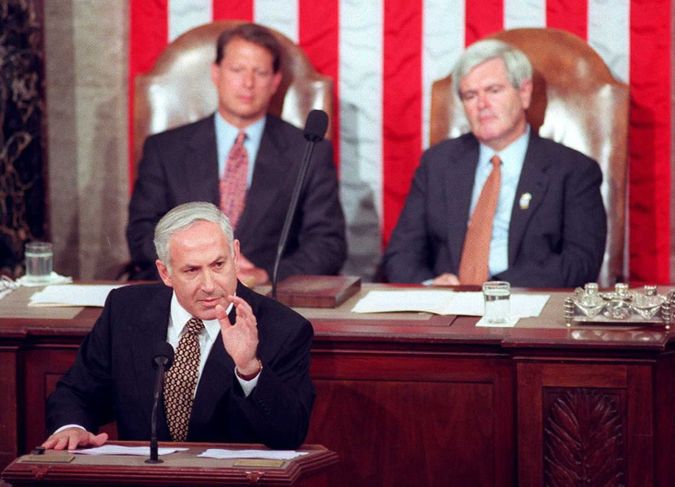 Israeli Prime Minister Benjamin Netanyahu addresses the joint session of US Congress as the Speaker of the US House Newt Gingrich(R) and US Vice President Al Gore (L) listen on July 10, 1996 at the Capitol in Washington. Netanyahu warned in his speech that nuclear weapons in the hands of Iran and Iraq would result in catastrophic consequences. By Travis Heying/AFP via Getty Images

It seems like the Netanyahu of 1996 was right: After all these years, it is fair to say that Israel has achieved economic independence.

The data don’t lie: According to my calculations using data from the most recent U.S. Overseas Loans and Grants (Greenbook) and a November 2020 report from the Congressional Research Service, US military assistance to Israel relative to Israel’s Gross Domestic Product (GDP) is less than 1%, down from 5% in the early 1980s.

Less than 1 percent. That’s it.

But the Israeli economy is also bigger than it’s ever been. According to data from the World Development Indicators, Israel’s GDP has grown significantly, by more than three times between 1990 and today (in real terms), despite some pressing challenges.

As such, the defense budget of Israel relative to its GDP has, too, shrunk significantly from its peak of 30% in 1975 to only about 5% today. American financial assistance to Israel is significant in the context of its military expenditure (about 20%). It is certainly not a small chunk, but also not its totality, as many naively presume.

Beyond the numbers, let us remember that American assistance to Israel is not simply a gift, but a political move explicitly designed to benefit the interests of the United States. It has been a goal of the United States, across party lines, to have a reliable ally in the turbulent Middle East who can be counted on to serve as the first line of defense against threats to global stability, such as terrorism and fundamentalist regimes.

To this end, the U.S. has always taken ensuring that Israel has a qualitative military edge in the region very seriously. In practice, most of the military financial aid that Israel receives from the U.S. is spent purchasing U.S.-made military equipment, much of which is of the kind that no one else in the Middle East has access to (this is one reason the attempt by then-president Trump to give F35s to the United Arab Emirates in exchange for normalization treaties raised so many eyebrows). 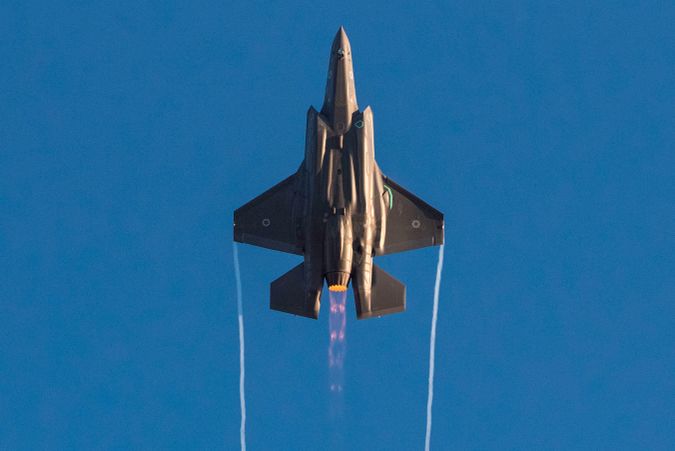 An Israeli Air Force F-35 Lightning II fighter jet performs during an air show at the graduation ceremony of Israeli air force pilots at the Hatzerim Israeli Air Force base in the Negev desert, near the southern Israeli city of Beer Sheva, on June 29, 2017. - The Israeli military has used its newly acquired F-35 stealth fighters in combat making it the world’s first to do so, the air force commander said on May 22, 2018. By Jack Guez / AFP via Getty Images

U.S. military aid to Israel has always been, to some extent, a win-win situation: Israel purchases American weaponry from American firms that in turn are subsidized by the United States: despite being technically given to Israel, most of the money itself actually stays in the United States.

But the truth is that Israel could very probably thrive without any financial assistance at all. Israel would still be able to have a qualitative military edge over its neighbors, and Israel would be able to continue to purchase US-made military equipment, such as F35s for its Air Force — just without receiving a subsidy in order to do so.

It is important to keep the economic perspective in mind. Yes, further conditioning economic assistance to Israel is a discussion that Americans can have if they want to. It is, after all, the taxpayers’ money.

But don’t be misled by the rhetoric: There is little leverage the U.S. has on Israel in the form of threatening a loss of economic assistance, for better or for worse.

It is tempting to imagine that conditioning aid to Israel would enable the U.S. to leverage more influence over what happens in the region. But for better or worse, Americans who want to influence Israel’s policy will have to find more effective ways to do so.

Dany Bahar is an economist at the Brookings Institution’s Global Economy and Development program. An Israeli and Venezuelan economist, he is also affiliated to The Growth Lab at Harvard Center for International Development , CESifo Group Munich and IZA Institute of Labor Economics.

What would happen if the U.S. stopped giving aid to Israel?