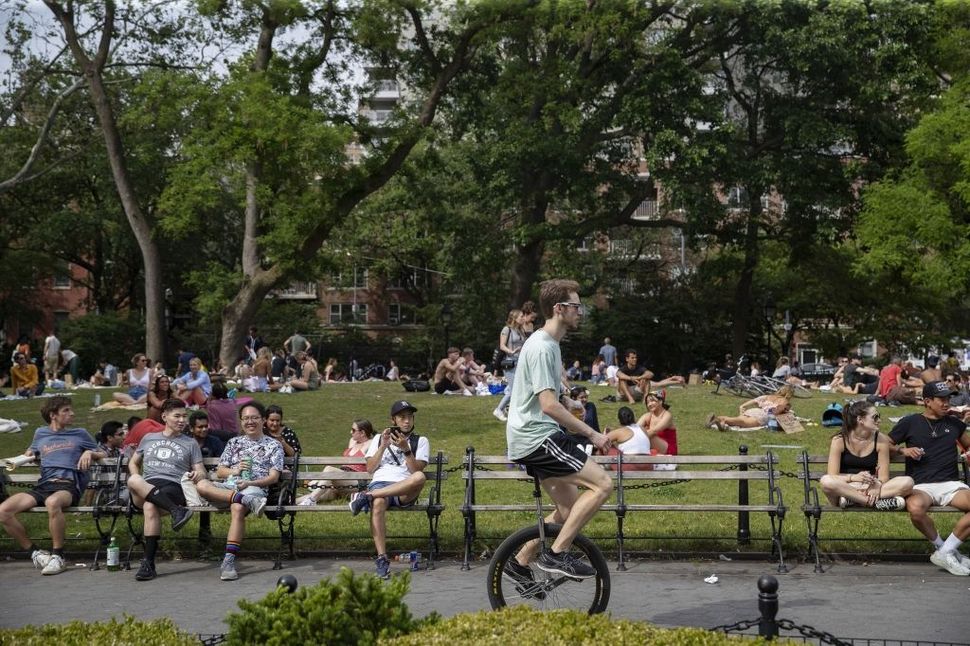 A man rides a unicycle through a packed Washington Square Park on May 22. Image by Getty Images

I met a guy last weekend with a son named “Dash.” Is he fast? I asked. Yes, I was assured. But that’s not how he got the name.

Turns out Dad loves a good nickname, and this was a sixth child, so they’d run short of dead relatives to honor. The parents hit on “Dash,” a great nickname for superheroes and other living things, and worked backwards: his birth certificate says Daniel Asher. I made a little joke about whether the speedy son of the “Incredibles” movies might have had the same name, might have been Jewish, and at what I hope was the appropriate interval, moved on to the next conversation circle.

(Alas, no, that famous “Dash” is Dashiell Robert Parr, according to the website Fandom, from which I also learned the word “tritagonist” — the character third in importance — but I digress.)

This riveting exchange unfolded at a 50th birthday backyard open house that could just as easily have taken place in 2019.

There were hugs hello among old friends, handshakes to introduce new people, kids crowded around a trampoline. The only detectable changes from pre-pandemic parties were little bags of chips on the tables and novelty ice-cream treats for dessert: the hosts said they’d turned to such packaged, single-serving items during the age of social distancing, and figured they’d stick with them now because, you know, they’re easier — and fun.

What pure delight to be at a party without fear, to reconnect with people I love and meet interesting new folks like Dash’s dad, to be vaccinated and maskless and not have to ask if it’s OK to touch the serving spoon on the taco bar.

And, also, a little exhausting, confusing.

By the end of the evening — after so many plan-less weekends we had somehow doubled-booked and went from birthday open house to backyard dinner-drinks with a few couples — I found myself wondering: What’s the point of small talk again?

It’s one of several little dilemmas I’ve been pondering amid what feels like a surprisingly sudden sprint back to normal. All around me, I see people and institutions trying to pick up where things so abruptly left off March 2020 as though the whole pandemic-lockdown era was a global bad dream. Restaurants and parks are packed. My suburban neighbors are once again slaves to commuter-train schedules. When someone asks for a meeting, we have to clarify — virtual or in-person? 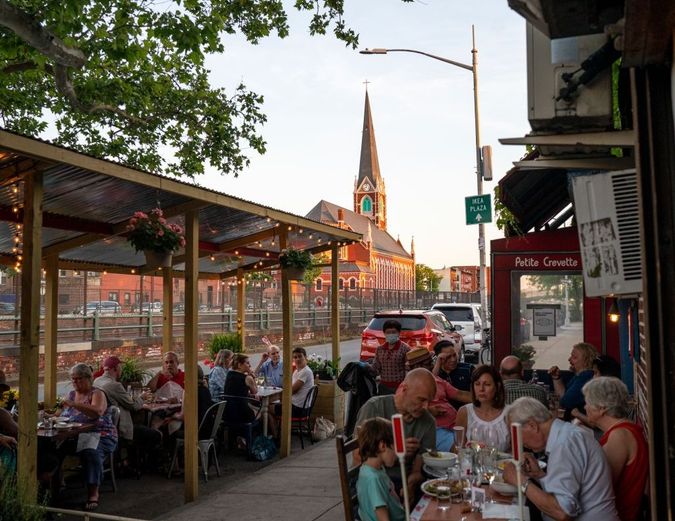 People sit outdoors at the Petite Crevette Restaurant on June 05, 2021 in Brooklyn Image by Getty Images

And I want to shout, wait, hold on a second, didn’t we learn anything, shouldn’t we change?

I don’t want to go back to normal. I want a new normal framed by insights gleaned from our collective nightmare. I want a simpler, more balanced, less hectic normal, guided by intentionality and collective responsibility, with deeper awareness of the risks and costs of our daily choices.

I am keenly aware that this is the very definition of a first-world problem, an exercise of extreme indulgence based on my extreme privilege. For some 599,000 American families, the new normal is about living without someone who died from COVID-19. Some 42 million Americans, including 13 million children, are struggling with food insecurity. Countless people are unemployed, or underemployed, or trying to rebuild small businesses. I understand that small talk is a very, very small problem.

But as I wrote a few months ago, I deeply believe the pandemic was an important wake-up call for a lot of us, and contained a lot of silver-lining life lessons we should not let fade away like a bad dream. I’m trying to wade back in cautiously, thoughtfully — but it’s hard not to just revert to my old ways.

In the earliest days of lockdown, my Montclair mom-friends regularly posted on group chat when they were headed to the store, offering to pick up staples for each other. One time, I responded to a post on a neighborhood listserv from an elderly woman I didn’t know who wanted stuff from Costco but was afraid to go, and when I dropped off the boxes, she gave me a couple of handmade masks. The mundane task of filling my freezer had become an act of tikkun olam, of community building, of human connection.

Even when that level of urgency faded, I took seriously the civic responsibility of keeping store trips to a minimum. I started ordering pantry mainstays for delivery, and planned meals ahead or just lived without an ingredient rather than constantly running to the store. But lately, I find we’re again going multiple times a week to grab a handful of things. Just because we can doesn’t mean we should.

Then there’s the question of fashion — or what I call clothes. 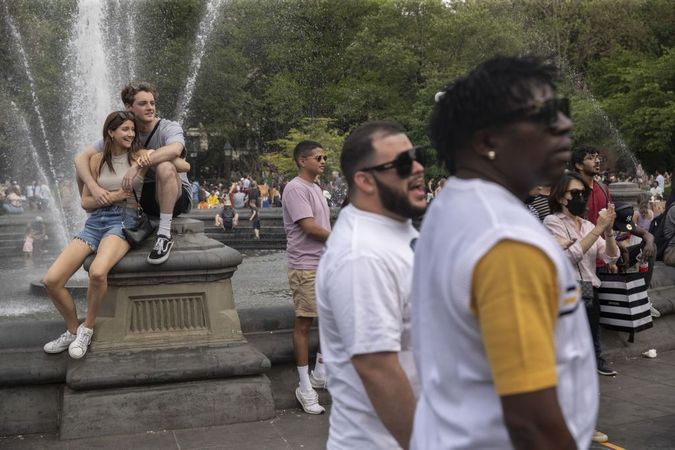 Amid months of jokes about whether people on Zoom meetings were required to wear pants, I had pledged to myself to prioritize comfort even when I once again commute into the city for work. Inspired by Kamala Harris’s Converse-on-the-campaign-trail, I bought a cute pair of flowered sneakers on sale and wore them with a T-shirt dress to a cocktail soirée in Manhattan last week. Nobody seemed to care, but then I saw this scary headline in The New York Times: “High Heels are Ready to Stomp Out Crocs and Birks.” Ladies, have we learned nothing?

I’m rushing to finish this column because I’m headed to Chicago this weekend: my niece and nephew are graduating from Northwestern University. It will be my first airplane trip since the pandemic, after years in which I was a savvy regular business traveler who had mastered the art of efficiently removing my laptop from backpack and replacing it so as not to hold up the security line.

As with small-talk, I’ll have to relearn those skills — while packing, I found myself stretching to recall the relative merits of wheely-suitcase versus  smaller shoulder bag. But, also: I want to make better decisions about the worthiness of any trip than I did in the Before Times, taking into account the impacts on my family and the environment.

Tonight is also my daughter’s first sleepover in 15 months. I’m guessing the girls will remember how to stay up all night talking about the meaning of life and many more mundane matters. I hope those include something about making the new normal better than the old one. 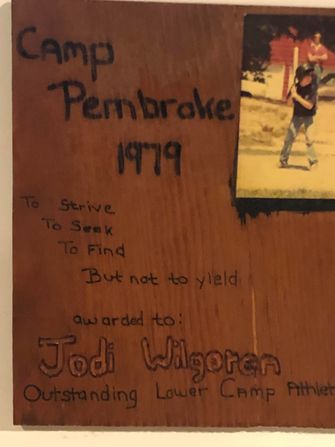 The iron-on name labels have been ordered. The socks have been counted. After suffering through a tragically campless 2020, I’m getting ready to pack my son up for the first session at Eisner, in the Berkshires. It all makes me nostalgic for my own summers at Yavneh, where I learned to speak conversational Hebrew and had my first real kiss, and Pembroke, where I was named Outstanding Lower Camp Athlete in 1979.

I’d love to hear/see your (or your children’s, or grandchildren’s) favorite camp memory. Please send to [email protected], subject line “Camp memory,” and be sure to attach a photo or perhaps an old letter home if you have one.

Our signature, century-old advice column is about to enter an exciting new phase. To make the magic happen, we need your questions. Send any dilemma about navigating Jewish-American life, identity, culture, politics or anything else to [email protected], or share via voice-message at (201) 540-5728.