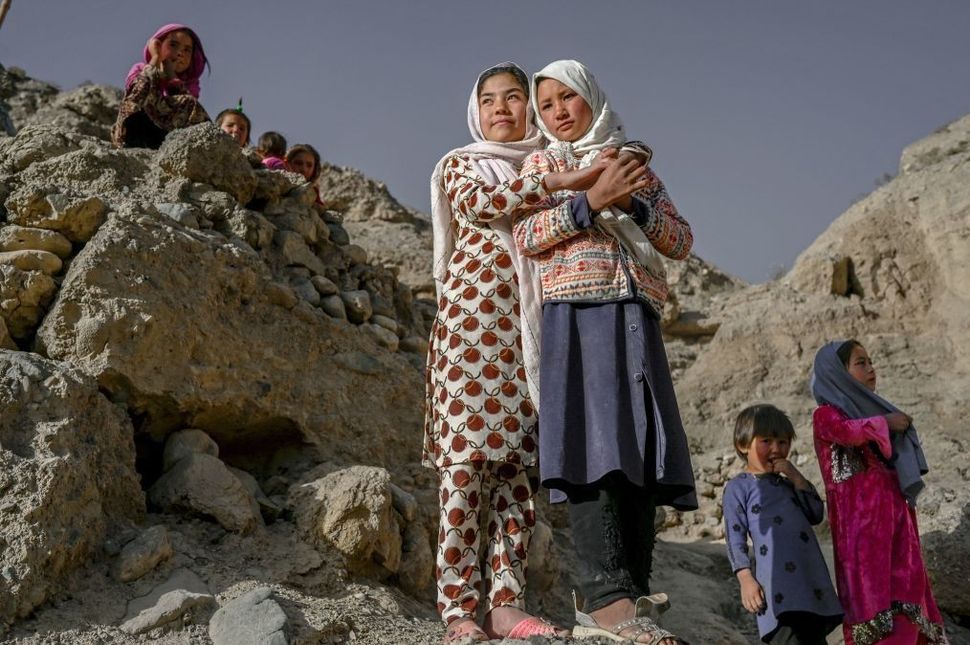 Hazara ethnic people stand on a cliff pockmarked by caves where people still live as they did centuries ago in Bamiyan, Afghanistan, Oct. 3, 2021. By BULENT KILIC/AFP via Getty Images

While that day has not come for me, it has come for the Hazara people in Afghanistan. On Sept. 7, 2021, following a swift military campaign, the Taliban – the Hazaras’ most violent oppressors – appointed themselves Afghanistan’s new government.

Like the Jews, Hazaras have faced violent persecution for centuries because of their appearance, language, and religion. In a country dominated by Sunni Muslims, Hazaras are labeled outsiders for their Mongolian appearance and Shiite Muslim faith. In the 1890s, Afghanistan’s ruler murdered an estimated 60 percent of the Hazara people in a genocide characterized by long death marches. The survivors were sold as slaves and concubines. The Taliban have continued this oppression, as Taliban fighters have been known to force Hazara girls as young as 12 into a sexual slavery they call “marriage.”

During the past 20 years, however, as the US military forced the Taliban from Afghanistan, Hazaras were given an opportunity to thrive. Hazara schools blossomed, businesses grew, and Hazaras were elected to government positions. Hazara girls, armed with school books, wouldn’t be forced to marry the man with the AK-47. Then, as US forces withdrew from Afghanistan in 2021, the Taliban returned, almost overnight, with a vengeance. In just the first half of 2021, the UN documented more than 20 attacks against Hazaras, killing 143 and wounding more than 300. “The whole Hazara community in Afghanistan, as well as in the diaspora, fear another genocide,” Hazara human rights activist Homira Rezai told the BBC in August.

So a few weeks before the Taliban took Afghanistan, when I learned that my Hazara friend Abuzar was trying to help his family leave the country, I felt morally obligated to help. I researched the countries where Afghans could travel without visas and gave a few suggestions. Abuzar’s response chilled me: “Those would be great options, but my family’s passports have expired.”

A passport. A thin paper booklet filled with ink stamps that seems so ephemeral, yet it can be the difference between life and death. My mother knew that. My ancestors who fled Eastern Europe knew that. And while I recognize we need some legal basis to establish identity, it seems unfair that people should die because of the date stamped on a piece of paper.

One of those annual Holocaust books I received at Hanukkah was about Chiune Sugihara, a Japanese diplomat who felt similarly. In the 1940s, Sugihara issued paperwork to thousands of Jews so they could flee the Holocaust. There are more than 100,000 people alive today who are descendants of those escapees. Sugihara’s actions were brave yet simple — pieces of paper that could save a life.

Today, though the situation is grim, there are still simple acts all of us can do to support the Hazara people. I know this, because for the past several months, I’ve been working with my friend Abuzar and a team of eight US/UK-based activists, journalists and Afghan expats to help evacuate high-risk Hazara girls and their families. To date, we have helped more than 400 people escape from Taliban-controlled Afghanistan, including Abuzar’s family. We’ve done this by calling on help from friends and reaching out to contacts in governments around the world. Canada, Ecuador and Pakistan have been helpful in our efforts, but more can still be done.

Recognizing our shared history, the global Jewish community has a role to play. We can begin by reaching out to our elected representatives to request more visas for the Hazara people — a people who are natural enemies of extremists and allies of democracy. We can donate to nonprofit organizations helping with the evacuation and resettlement of Hazaras like Canadian Hazara Humanitarian Services and 30 Birds Foundation (which our team recently launched). We can even encourage our synagogues and communities to host Hazara families — families that will resonate strongly with the Jewish experience.

A few weeks ago, I flew to Saskatoon, Canada to welcome more than 200 Afghans our team had helped evacuate. At the airport, the evacuees were happily surprised by an unexpected guest. A blonde nine-year-old Canadian girl who had come with her mother was passing out dozens of homemade “Welcome to Canada” cards that she and her friends had made. I looked at her and remembered Sugihara’s brave yet simple acts. Pieces of paper that could make a difference.

Justin Hefter is a co-founding board member of the 30 Birds Foundation, which supports predominantly female Hazara scholars who have been evacuated from Afghanistan. He’s also the Vice Chair of The African Middle Eastern Leadership Project, which trains, connects and protects young human rights activists. He is based in Cambridge, Massachusetts where he is pursuing a masters in public policy at the Harvard Kennedy School.