Hanukkah gnomes have exploded in popularity, despite deeply antisemitic origins 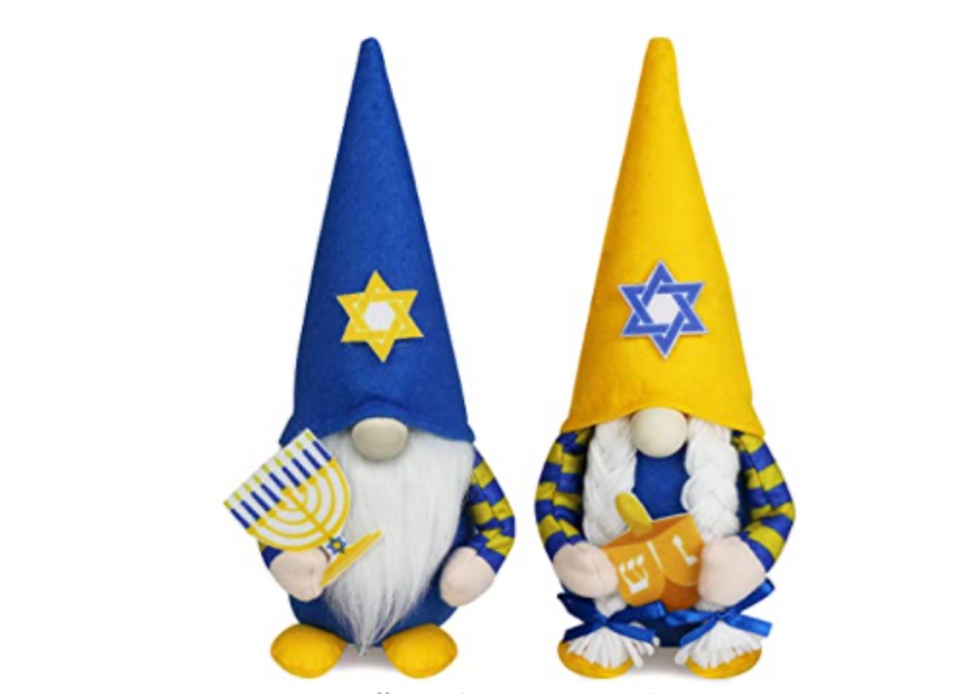 Two Hanukkah gnomes for sale on Amazon by supplier Slawoy. The gnome on the left wears a blue hat and carries a menorah, the gnome on the right carries a dreidel. Courtesy of Slawoy via Amazon

If you are a Jew living in the United States, you’re likely aware of Hanukkah’s slow creep toward becoming Jewish Christmas. There is Shmelf the Hanukkah Elf, ugly sweater sugar cookies, and Wayfair Santas wrapped in prayer shawls. This year, however, the latest Chrismukkah riff is … a Hanukkah gnome.

Hanukkah gnomes are cute, and have become a feature of Hanukkah discount aisles everywhere. Pop Cholent’s Danny Zeff found that Marshalls had Hanukkah gnomes (among other bizarre Chrismukkah tchotchkes) framing every end cap. 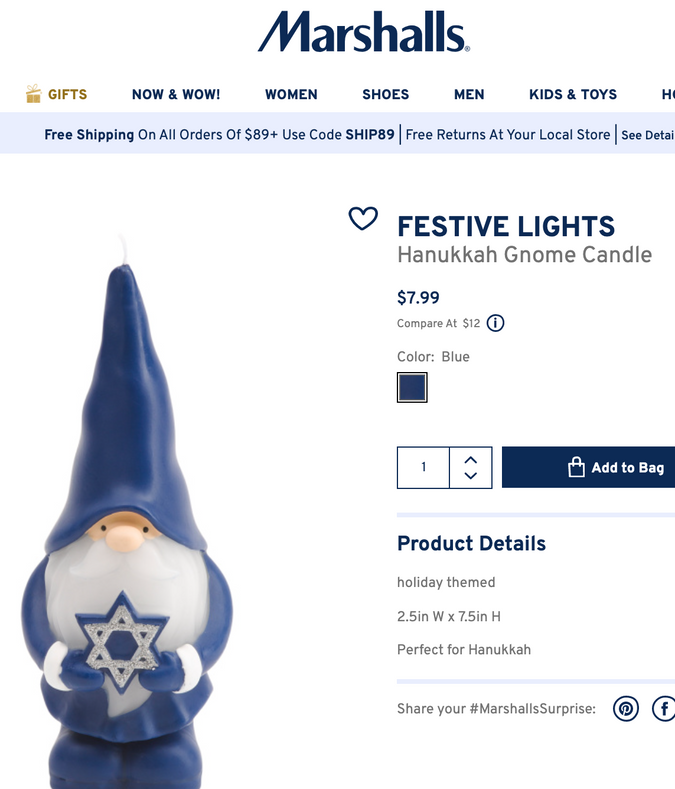 A screenshot of a Hanukkah gnome for sale at Marshalls.com. Courtesy of Ed Weinberg

It’s a win-win for enterprising marketers and decoration-hungry revelers, right? Maybe, but these cute little dwarfs are smuggling centuries-old antisemitic shorthand under the Hanukkah bush.

Gnomes are known by their pointy hats, jewel hoards, and secretive ways — all stereotypes associated with medieval Jews. Their inclusion in the mass market Hanukkah mythos hints at a more dangerous forgetting than that of tradition.

This isn’t any ordinary assimilation panic — it’s a choice between Jewish history and repurposed Christmas tat.

The early returns show that the tat is winning. The South Korean brand Weixinbuy simply stuck a blue-and-white hat on their Hanukkah gnome, and didn’t even bother to change the attribution on their “Swedish Christmas Santa Gnome Tomte Plush Handmade Doll Xmas Home Ornaments Christmas Decoration Table Decor Present” — one of 945 Hanukkah products for sale on Amazon. 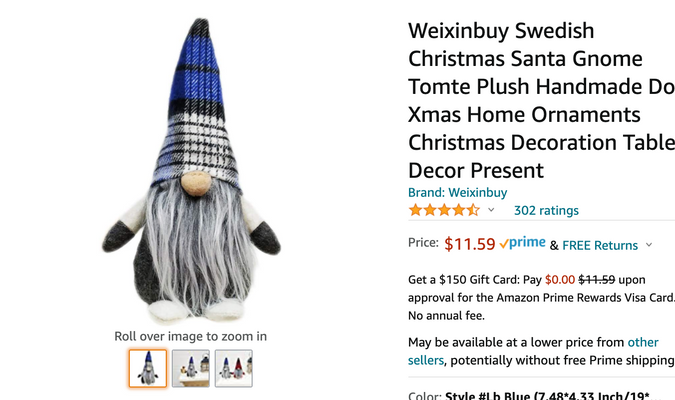 A screenshot of a Hanukkah gnome’s Amazon listing. It is sold by the brand Weixinbuy. Courtesy of Ed Weinberg

On the grassroots level, Etsy’s artisan-made Hanukkah gnomes stretch as far as the search results tally — 1,058, including ads.

Hanukkah gnomes are everywhere because people buy them. I spoke with four Etsy Hanukkah gnome creators to ask where they got their inspiration from. Each of them said that they created their versions in response to customer demand, and all expressed surprise that gnomes had anything objectionable about them. One had a customer who said, “Anything that you have with Christmas on it, change it to Hanukkah and I’ll buy it!”

That shouldn’t surprise anyone. For years, stateside Hanukkah has been undergoing the same commercialization that our domestic Christmas is marked by. The way we celebrate is in many ways an American creation.

The problem here isn’t the loss of an authentic Hanukkah. It’s the trade-off we make when we discard a symbol with actual meaning in favor of an early-night novelty gift.

And make no mistake — these pointy-hatted creatures held a good deal of meaning to our ancestors. Dr. Naomi Lubrich, director of the Jewish Museum of Switzerland, chronicled this strange bit of Jewish history in her article “The Wandering Hat: Iterations of the Medieval Jewish Pointed Cap.”

At first, the pointed cap was worn by European Jews as a hat tip to their Asian origins. As their communities became more westernized — and the Crusades brought anti-Asian sentiment back home — Jews stopped wearing these hats. However, when these hatless Jews started being mistaken for Christians, rulers commanded them to continue wearing the hats.

The dwarf connections soon followed. Excuse the nerdy digression, but let us dig into the dwarf/gnome overlap.

Dwarfs and gnomes are both short, bearded, magical creatures. Basically everything ascribed to dwarfs in the following paragraphs applies more to the gnomes of Romantic period fairy tales than the dwarfs of Norse mythology.

In the 13th and 14th centuries, European artists began to depict dwarfs wearing a pointed cap, a turning point in the appropriation of Jewish symbols. The pointed hat began to be used in representations of deceitful figures, both criminal and magical. Lubrich writes, “If the pointed hat was the dwarf’s most conspicuous Jewish appropriation, it was not the only one. Dwarf narratives also fell in line with discussions of Jewish character, Jewish cohesion, and Jewish customs.”

Dwarfs were often depicted as merchants and gold hoarders. Lubrich writes, “The most popular narratives cast dwarfs as pagans who are unreliable, disloyal, vengeful, spiteful, and backstabbing.” These dwarf-Jew stereotypes had real-world consequences, such as King Philip the Fair expelling all Jews from France in 1306 to plunder secret Jewish treasures.

Richard Wagner took the dwarf-Jew characterization into the modern era with the dwarfs of his masterpiece, The Ring of the Nibelung. German philosopher Theodore Adorno claims that Wagner drew on a palette of antisemitic dwarf stereotypes: these dwarfs are obsessed with gold, of unclear ethnic origin, quick to exploit others, and “bubbling over with deceit.”

For some, these metaphors have survived to the present — witness the blowup around the hiring of Berlin Philharmonic conductor Kirill Petrenko, a Russian Jew. In 2015, Northern German Radio commentator Sabine Lange compared Petrenko to the dwarfs in Wagner’s operas: “the tiny gnome, the Jewish caricature.”

To be fair, most Hanukkah gnome buyers probably don’t have these associations in mind. Beyond any subjective annoyance when real history is co-opted for commercial purposes, does it matter? According to Rachel Kenneth, a communications professional who for the past five weeks has been skewering inane Hanukkah products on her Instagram account, Hanukkah Fails, it does.

“But unfortunately that laziness can lead to misinformation, misrepresentation, and even antisemitism in the wrong hands. It is not hard to see the parallels between gnomes (and goblins and the like) and harmful stereotypes about Jews, and that’s why I think we should retire this particular decoration.

Ed Weinberg is an American journalist who writes on architecture, international oddities and antisemitism. You can find more of his work at edweinberg.com.

Hanukkah gnomes have exploded in popularity, despite deeply antisemitic origins