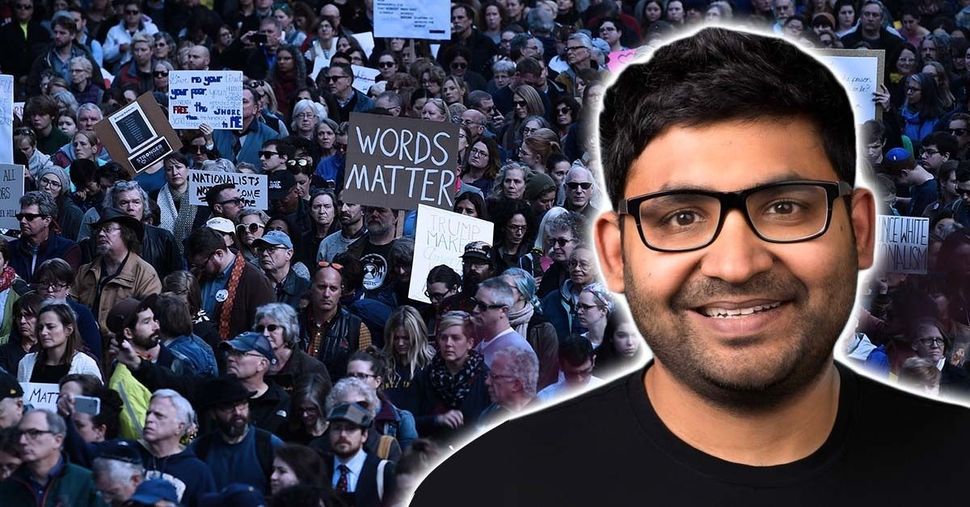 Twitter’s new CEO, Parag Agarwal. Background: a protest after the deadly shooting in a Pittsburgh synagogue. By Getty Images

Congratulations on becoming Twitter’s new CEO. We at ADL have worked with Twitter for years and want to remind you of the explicit and repeated commitment that your company has made to keep hate off its platform.

Twitter was once a cesspool of hate speech, keeping ADL analysts quite busy. Our reports on the toxic flow of antisemitic content on the platform have been widely reported.

Twitter certainly has made progress over the years in its efforts to control such poison, but despite official policies and product improvements, hostile antisemitic content and other troubling forms of hate speech remain far too easy to find on the site.

There are plenty of reasons why American Jews and Jewish organizations like ADL are so concerned about online antisemitism and hate on social media. Threats of harassment, vandalism and violence remain material concerns for the American Jewish community.  At a time when antisemitic incidents have risen to historically high levels across the country, and in the aftermath of high profile antisemitic attacks such as those in Pittsburgh, Poway, Jersey City, Monsey, Los Angeles and New York City, American Jews are feeling far less safe in the U.S. then they did a decade ago. There’s no doubt that social media platforms have played an outsized role in the spread of antisemitic ideas and the amplification of anti-Jewish assaults.

An even higher number of American Jews — 36% — said they had experienced harassment in some form online. And overall, nearly one in four American adults indicated that they experienced the most harassment on Twitter.

Online antisemitism takes many forms. It can be anything from a hurtful threat or name-calling to more dangerous and insidious hateful messages spread by far-right extremists, anti-Zionist invective generated by anti-Israel activists, Holocaust denialism or antisemitic QAnon conspiracies. Social media platforms like Twitter help amplify the most extreme voices in society and help spread their hateful messages to thousands, if not hundreds of thousands of people, in nanoseconds.

There are concrete steps Twitter can take to stem the tide of harmful content and create a safer and more equitable platform for all. Twitter has largely been a good-faith partner in improving user tools and researching the potential harms caused by its algorithms, such as amplifying certain political content. I also applaud Twitter for making some data available to academic and independent researchers; I hope other companies will emulate your efforts.

Twitter, however, has a long way to go to put the common good over profit.

I would ask you to renew Twitter’s commitments to fight hate on its platform, including:

Enforce policies on antisemitism and hate consistently and at scale.

Twitter has many strong policies against hate, but they are only effective if enforced well. ADL recommends that Twitter allocate significantly more resources for automated content moderation and human review.

Although Twitter provides better data access than many platforms, it must better support researchers studying the nature of antisemitism and intolerance online.

Twitter and other tech companies should submit to external audits on the prevalence of hate on their platforms and their efforts to mitigate it. External audits should be conducted by trusted experts who can verify whether social media companies follow through on their stated promises.

Twitter should incorporate the experiences of targeted groups in both automated and human reviews, expanding research into tools and processes informed by impacted communities. Twitter should also adopt anti-hate by design principles and reporting best practices advocated by ADL and other anti-hate groups.

These suggestions do not restrict freedom of speech in any way. Twitter can remain the town square for much of the public conversation, but these modifications would strengthen the service and improve the experience for all users. While some might argue that these changes could pose some risk to Twitter’s short-term business metrics, I believe the long-term risk to Twitter — its users, its employees, and all of society — far outweighs those economic costs. Making Twitter a less toxic, more transparent environment is, in fact, a strategy for long-term growth. Technological fixes alone cannot solve social ills like bigotry or discrimination, but they can limit the visibility, reach, and normalization of extremist ideas and the lunatic fringe, forces that truly are existential risks to fair treatment and justice for all.