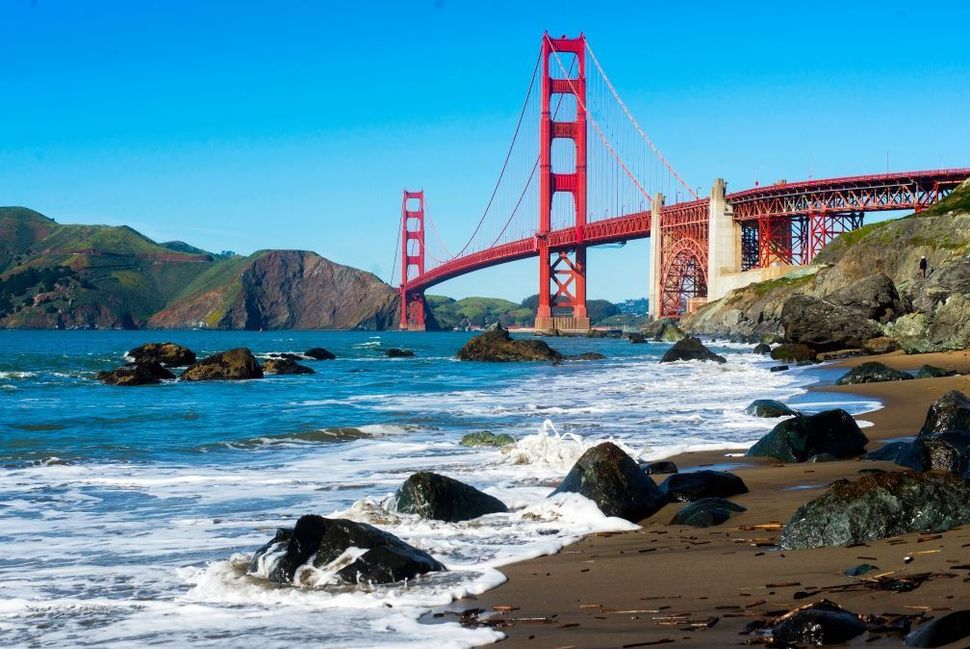 A general view of the Golden Gate Bridge seen from Marshall’s Beach on March 3, 2017 in San Fransisco, CA. By Matthew Baker/Getty Images

This essay was adapted from a section of the book “Why Do Jewish? A Manifesto for 21st Century Jewish Peoplehood,” published by Gefen Publishing in Nov. 2021.

If the last century of Jewish American life was built by the Jews of the East Coast, then it’s quite possible the next hundred years of Jewish life will be built by West Coast Jews.

The Federation system came out of Boston , the JCC Association of North America came out of Baltimore and New York, and the influential rabbis and mega-synagogues in the tri-state area, including Central Synagogue in Manhattan and Temple Emanu-El of New York, defined Jewish rituals for the last century. Even Reconstructionist Judaism, which is just celebrating its 100th birthday, was born in a New York synagogue, SAJ: Judaism that Stands for All.

Many of the cultural aspects of American Jewish identity came from the East as well. From the Borscht Circuit to Broadway, Jewish humor and theater were born. New York publishing houses, magazines and newspapers determined what was Jewish art and literature. New York institutions like Katz’s Deli and Russ and Daughters continue to serve Ashkenazi delicacies that have defined what most Americans conjure to mind when they think of Jewish food.

Meanwhile, I grew up in California, the product of two New Jersey Jews. My family’s Judaism was infused with Jewish values but not strictly traditional. For instance, we didn’t eat treif in the house, but miraculously, pepperoni pizza and mu-Shu pork became kosher when eaten at restaurants. And every Saturday morning instead of going to shul, we’d buy bagels, cream cheese, and lox from the local deli. That was our Shabbos.

While I attended college on the East Coast, I studied in Israel for a semester and later returned to California for a graduate degree in Philosophy of Religion and Theology. In each place, I’ve had the opportunity to see a different type of Judaism. Now, as the CEO of the Oshman Family JCC in Palo Alto, I am able to travel the country, sharing in the multitude of different Jewish experiences in scores of communities, and I have had the honor of observing and co-creating many new Jewish rituals over the years. What I have learned is that the Jewish community here on the West Coast has three traits essential to shaping the next century of American Jewish life.

First, the ethnography of West Coast Jewry is remarkably diverse, especially as compared to that of American Jewry at large. In most of the US, 12-15% of American Jews re estimated to be Jews of Color, but a quarter of Bay Area Jewish households include a respondent or spouse who is Hispanic, Asian American, African American, or of mixed or other ethnic or racial backgrounds, according to a 2021 study by the Jewish Community Federation and Endowment Fund. This number rises to nearly 40% of households when respondents are younger than 35. Meanwhile, Los Angeles is home to the largest Iranian Jewish community in the US, and in Northern California, we have one of the largest populations of Israeli expats in North America per capita.

San Francisco-based organizations like JIMENA are dedicated to advocating on behalf of Mizrahi Jews and Jewish refugees from Arab countries, while Be’chol Lashon was founded in the Bay Area to raise “awareness about the ethnic, racial and cultural diversity of Jewish identity and experience.” With so many Israelis, Iranians, Asian Jews, and Jews of Color living in California, we have a unique opportunity to create new ways of doing Jewish that mashup various traditions and cultures.

Second, the West Coast has the potential resources to build tomorrow’s Judaism more so than we have had in the past. In 2010, when 40 of the world’s wealthiest people signed on to Warren Buffett’s Giving Pledge challenge — a pledge to give away more than half their fortune during their lifetimes —six members of that list were Bay Area Jewish philanthropists who give to Jewish causes. Some examples include Oracle founder Larry Ellison, who gave $500,000 to fortify Sderot from Hamas rocket attacks, and Lorry Lokey, who gave $25 million to the Technion. More recently, a younger generation of Jewish philanthropists has begun making high-profile gifts to Jewish causes, like Sheryl Sandberg’s $5 million donation to United Hatzalah.

Silicon Valley has produced more billionaires than ever before — with many Jews among them — and this is starting to even the playing field with Jewish philanthropy from the East Coast. Furthermore, in my own interactions with some of these philanthropists, they want to carve a new path. They don’t just want to give to the old legacy institutions. They want to create new avenues for Jewish life, new models of the benefactor-beneficiary relationship, and new ways of doing Jewish.

Finally, the entrepreneurial mindset is deeply ingrained in the West Coast. Leaders out here are not just building startups in the tech world — some of the most innovative Jewish startups were born on the West Coast as well. Part of this could be related to the pioneering spirit of those who have chosen to journey the end of the world — or at least the end of the continent — where the land meets the vast Pacific Ocean. But as traditions are slowly left behind, new rituals emerge.

At the Well is an organization founded in San Francisco by Sarah Waxman, whose mission is “to connect women around the world through transformative practices inspired by ancient Jewish wisdom.” They use material rooted in ancient texts to inspire the creation and sustaining of “Well Circles,” groups of women who meet monthly to share stories and spiritual experiences.

Another boundary-pushing organization is Moishe House, founded in Oakland in 2006 by David Cygielman to help Jewish young adults who “wanted to more actively engage in the Jewish community and were too old for Jewish life on campus and too young for the traditional young adult and family programming being offered.” Today, there are Moishe Houses in over 27 countries, and they reach more than 60,000 young adults around the world every year.

Wilderness Torah, an innovative Jewish startup founded by Zelig Golden out of Berkeley, has the mission “to awaken and celebrate the earth-based traditions of Judaism to nourish the connections between self, community, earth and Spirit.” They offer a variety of programs that celebrate the environment and outdoors including holiday celebrations, Jewish study opportunities, a B’nai mitzvah alternative and a scouting initiative called Shomrim.

Of course, the West Coast doesn’t hold the copyright on unique Jewish startups. Yet the diversity of the Jewish population, the history of religious and cultural experimentation in the region and the predisposition to “move fast and break things,” to quote Facebook’s famed internal motto, helps us accelerate innovation in the Jewish ecosystem. It is in our nature not to accept the prescribed way, but to buck the status quo.

So, if we aspire to make Jewish life more meaningful, relevant and joyful for the next hundred years, then perhaps we should take more cues from the West Coast and break some glass.