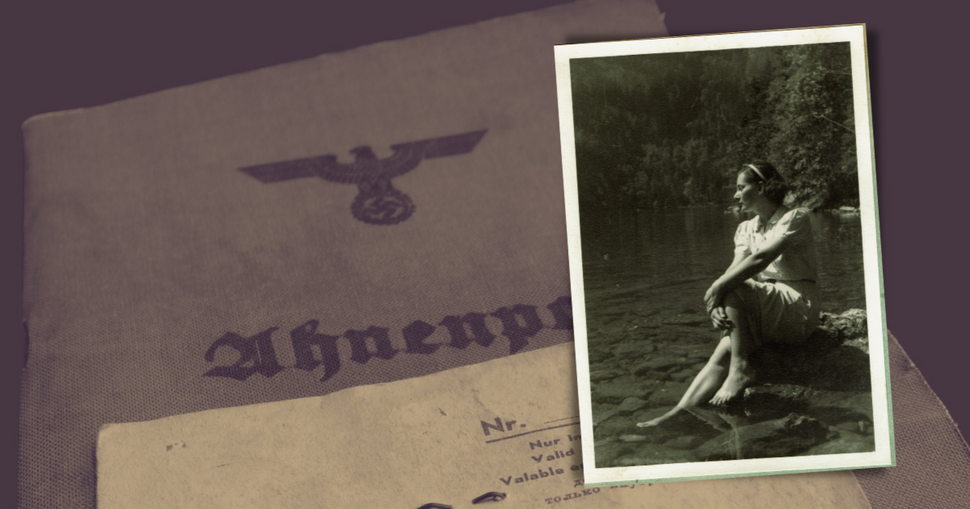 Photo illustration depicting the author’s mother Dorota sometime between 1943-1945, in Shönau am Köningssee, Berchtesgaden. Berchtesgaden was where Hitler’s summer home was located. Photo-illustration by Jake Wasserman

When I was 34, I discovered my mother was a Holocaust survivor.

My parents finally put their hellish marriage out of its misery and called it quits. In the aftermath, I came across an affidavit in which my mother was claiming financial support. In it, she stated she was born into the Jewish faith. It was an astonishing revelation. She had converted to Catholicism after the war in order to marry my Catholic father.

I had been raised Catholic, celebrated all the Catholic holidays, had first Communion (twice!), said all my prayers to Jesus in Polish and even met the Polish pope, John Paul II. But according to Jewish law, I realized that I was actually Jewish, like my mother.

It completely changed my life.

My parents had been married for 42 years, and the split, along with the discovery of my mother’s heritage, led me to a new understanding of her. She often had fits of rage, melancholy, and anxiety. Now I began to learn why.

When she could finally open up, we spent hours talking and often weeping. I learned that my mother’s name wasn’t Joanna, but Dorota Milstein. I learned that she’d lost her parents, Maurycy Milstein and Bronislawa Dawidowicz, in the Lwów ghetto.

Dorota labored in the ghetto hospital as a nurse, and later, in Janowska camp, where she sewed slippers and sorted the possessions of murdered Jews. It was a squalid existence, teetering on the edge of brutality and death.

When my mother heard the ghetto was to be liquidated on June 1, 1943, she managed to get false papers. Dorota was gone; she was now Joanna Litniowska, a good Polish Catholic girl.

Within three weeks, Joanna made it out of Poland and into Germany, where she got a job as a kitchen maid at the swanky Hotel Schiffmeister. Less than three miles down the road was Hitler’s Eagle’s Nest, his summer headquarters.

Hitler and Eva Braun counted the Schiffmeister among their favorite dining spots and visited whenever they were in the area. What would they have said if they knew their schnitzel and spätzle had been prepared with the assistance of a Jew?

After the war, Joanna wound up in a Displaced Persons camp outside of Munich. At the time, about 30% of DPs in Europe were Jews. As David Nasaw describes in his book “The Last Million,” it was chaotic, with Jews initially housed with the same nationalities that had tormented them before and during the war.

In the fall of 1947, my mother was one of the DPs to complete a “Care and Maintenance” questionnaire indicating where she lived, her education, what languages she spoke and where she had been employed. The form was to determine her eligibility for financial assistance from Germany designed to compensate survivors for wartime suffering, having to flee persecution and surviving under a false gentile alias.

She was denied. She was told, “Pani była na wolnosci” — you had your freedom.

But Dorota was never “free.” Her parents had been murdered by the Nazis; she had narrowly escaped typhus, torture and death.

Yes, she’d escaped the ghetto and found a job. At the hotel where she worked, Joanna may have been able to come and go as she pleased. But she was a terrified young Jewish woman who would have been shot if her truth was revealed.

These experiences haunted her. My mother was less a survivor than a refugee from a time and place that had traumatized her. Her existence was saturated with horrific memories. She was too shattered to even talk about it for 40 years.

A program called the German Social Security Ghetto Pension, also known as ZRBG, was made available to Holocaust survivors who had worked for the Nazis in the ghetto. My mother could have used the money, but couldn’t bring herself to apply.

My mother passed away in 2009. Recently, I heard of a program where heirs of survivors could receive a one-time payment from the German government. I needed my mother’s fractured life to be validated by those who had devastated it, so I applied.

But again, it was not to be. Seventy-three years after the German government denied my mother’s first application for restitution, they rejected her for a second time. The program only applies to those who were born in 1923 and after. Dorota was born in 1918, and therefore ineligible.

I’m sorry I ever filed that claim. I’m sorry I ever held out hope that I could find any kind of redemption for her ordeals from the German government, who seem determined to discard their responsibility for what my mother endured. From having the affront to telling her she had been “free,” or that she hadn’t suffered enough, to this latest indignity.

Money talks. In this case, it would have said, “Dorota, the German government is sorry you had to bury the agony that Hitler dumped onto you.”

For 40 years, my mother couldn’t bring herself to talk about what she went through. But I can. And I’ll continue to talk and write, wherever, whenever and however I can.