Volodymyr Zelenskyy reminds us what a Jewish hero looks like 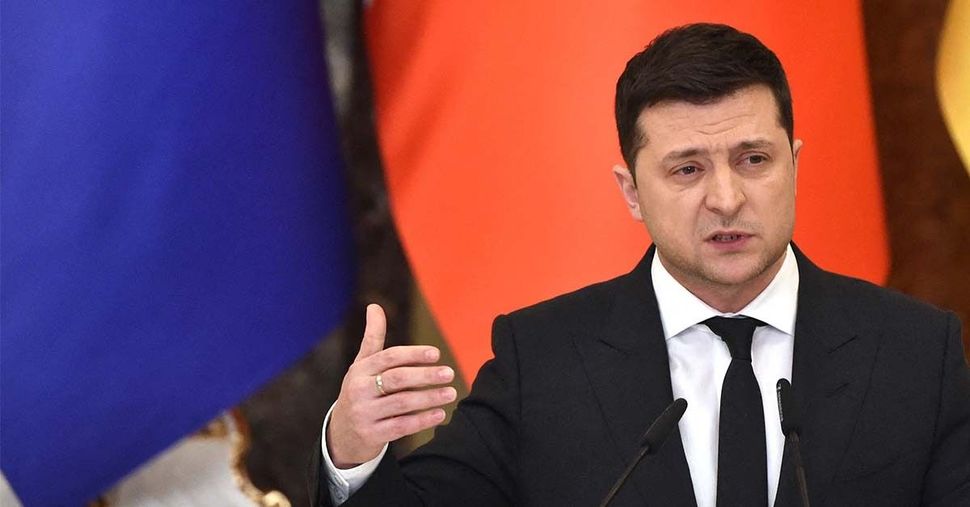 In November 1987, I visited Soviet refuseniks in Russia as part of a grassroots volunteer organization in Chicago dedicated to helping Soviet Jews.

The USSR was in its final days. I recall how few lights were on when my plane landed, a reflection of a nation that struggled to provide basic necessities like electricity. Food lines and shortages were common.

Still strong, however, was the oppressive authoritarianism of the Soviet Union that made dissidence deadly. Galling to the Soviet authorities was the desire of many Jews to offer any positive expression of their identity or desire to emigrate to Israel. Anyone who taught Hebrew was likely to close off the possibility for decent jobs. Some, called “Zionist criminals,” were imprisoned.

The courage of these refuseniks taught me an unforgettable lesson about what it means to show resolve against totalitarianism and to challenge those who use brute force to stifle freedom. Watching Ukrainian civilians today fight reminds me of the courage I witnessed in Russia decades ago.

While in Moscow, I accompanied one of the refuseniks to a protest in front of the KGB headquarters. As we stood on the wide sidewalk across from the protest, a van pulled up right in front of us.

Out came several burly officers, surrounding us, while another took our pictures. Just a few months before, some American visitors to Jewish dissidents were beaten up, so my heart was pounding.

The man we were with was taken into the van (we later found out he was interrogated and released the next day). Showing our passports, my fellow traveler and I said, in Russian, “we are American.”

The officer handed our passports back, but with a sarcastic smile and chuckle. He wagged his forefinger at us, as if to say, “this time you’re safe. But don’t think you always will be.”

After the incident in Moscow, we traveled on to Leningrad (now St. Petersburg). Among the people I met was 22-year old Igor Chernoschwartz, half a head taller than me, with deep-set eyes and a dark beard.

He looked ten years older. One evening, we stood speaking in the cold night air, afraid to come too close to the hotel where some peering eyes might see us. We talked about our families and what brought us to Jewish life.

“Where is your family from?,” Igor asked.

“On my mom’s side from Germany; on my dad’s, from Vilnius”, I replied.

“Vilnius,” Igor smiled with a sadness tinged with anger, “My family, too.” He paused. “So what made your grandparents so much smarter than mine?”

Just a few days after I met Igor, he and other Jewish activists I met traveled to Moscow for a demonstration against the forced conscription of a 19-year-old Jewish man.

Many dissidents and several Western journalists who were covering the protest were beaten up by bystanders with the complicity of Soviet security agents. Chernoshwartz was jailed and fined.

I’ve been thinking a lot about Igor watching Ukrainian president Volodymyr Zelenskyy heroically stand with his people and stand up to the wannabe ruler of a new Russian empire who, like every dictator throughout history, thinks that power is achieved by the force of arms.

As the prophet Zechariah taught us 2,500 years ago, however, it is “not by might, not by power, but by spirit.”

Igor and the thousands of refuseniks, along with the hundreds of thousands of Jews who supported them around the world, showed the leaders of the USSR that the human spirit of liberty cannot be stifled.

In this moment, Zelenskyy seems to be channeling the heroic spirit of Queen Esther, who — in the face of death — spoke out against injustice, the ruler of which Mordecai said, “perhaps you have attained authority to rule for just such a crisis.” (Esther 4:14)

When he was first announced as Ukraine’s president, Zelenskyy quoted George Washington in his speech: “Labor to keep alive in your breast that little spark of celestial fire, called conscience.”

In the first hours of Russia’s war, Zelenskyy showed that conscience by refusing to abandon his people. Offered to be evacuated out of the country by the United States, his words, “I need ammunition, not a ride”, showed us what leadership, heroism and conscience look like.

I don’t know if I would have the courage of these two Jewish men willing to stand up to Russian overreach. But they inspire me not to cower, not to think appeasement is the path to peace, and to never underestimate the power of self-determination.

Volodymyr Zelenskyy reminds us what a Jewish hero looks like