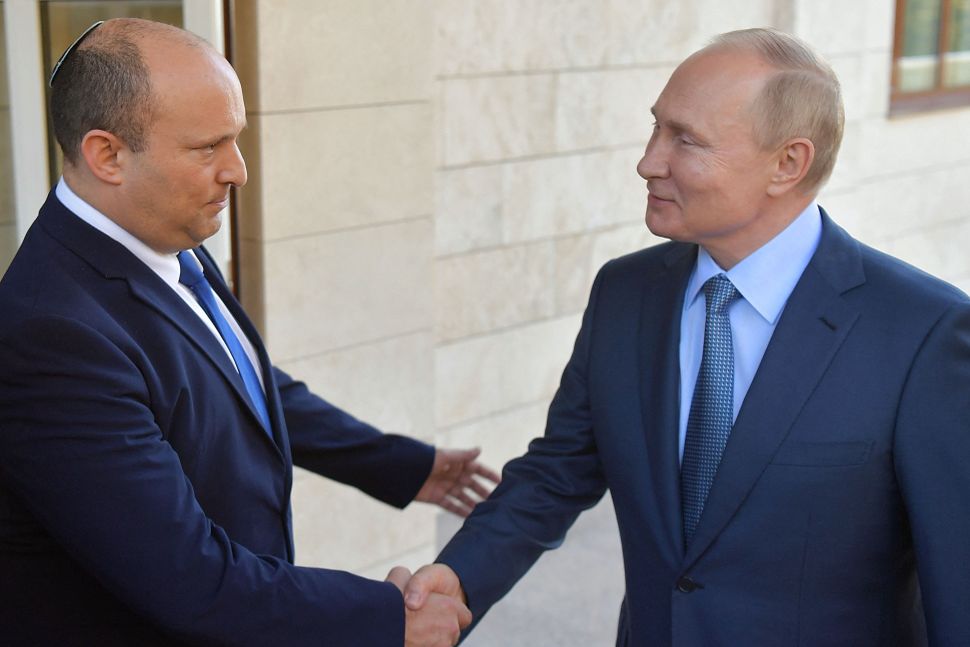 Suddenly, everyone is helping the Ukrainians. The ferocity of the Russian assault on an outgunned neighbor has stiffened spines from Washington to London and sent post-Cold War taboos tumbling across Europe.

Pacifist Germany is dispatching weaponry and has promised to spend 2% of GDP on defense going forward. The EU is suddenly in the arms trade, sending fighter jets to the Ukrainians. Even the Swiss have abandoned their prized neutrality and joined the attack on Russia’s financial markets.

Only Israel is standing aside, and it’s important to understand why.

That attempt to avoid provoking Russia has angered many, including staunch Israel ally Lindsey Graham.

The Republican senator, who has Prime Minister Bennett’s ear, told Fox News that it was “in everyone’s interest” to defend Ukraine.

When asked for Stinger missiles, Graham told the host, “apparently Israel said no. So, I’ll get on the phone to Israel. You know, we stand up for Israel with the Iron Dome,” said the South Carolina senator.

The prime minister should explain that his hands are tied — and that the fault is entirely America’s.

If Israel were to intervene on behalf of Ukraine, Russia would end Israel’s freedom to attack Iran’s missile buildup in Syria— and might well greenlight a devastating attack by Iranian forces in the country.

That strategic predicament is a relatively recent development.

In 1973, Henry Kissinger’s deft diplomacy evicted the Soviets from the Middle East, positioning the United States as patron of both Israel and the moderate Arab states.

For the next four decades, Israel’s aerial superiority allowed it to range more or less free across the region to defend its interests.

When Saddam’s Osirak reactor was about to go hot in 1981, the Israeli Air Force was able to destroy the facility by long-range strike during “Operation Opera.”

Western countries strongly condemned Israel’s actions at the time, but the favor that Israel had done the world became clear in 1991, when Iraq invaded Kuwait in the Gulf War.

As recently as 2007, Israel’s air superiority allowed it to neutralize another growing threat by striking Syria’s nuclear facility in Deir Ez-Zour.

Once again, the wider benefit of Israel’s freedom to act in a very nasty ‘hood was born out when the Syrian civil war broke out in 2011. Had ISIS or Iran-backed militias been able to get their hands on nuclear material, the results wouldn’t have been pretty.

In the early days of this conflict, when Iran and Russia backed the Assad regime, the United States had a clear choice: intervene in the war to maintain American-Israeli dominance in the region, or leave the field to foreign powers.

We all know how that ended. Determined to get out of the Middle East, the Obama administration tripped over its own chemical weapons red line. Vladimir Putin’s 2015 decision to intervene to save Assad meant the arrival of powerful Russian radar and air defenses at Khmeimim in Syria. US credibility was badly dented, but for Israel, the results were far worse.

Like baleful eyes, those radar arrays have tracked Israeli civil and military flights across much of the country ever since.

In parallel, Iran has entrenched itself across Syria and Lebanon, ringing Israel with tens of thousands of missiles — many of them with precision capabilities. A good relationship between Bibi Netanyahu and Putin carved out a space for Israel to continue attacking Iranian forces in Syria while Russia looked on.

But periodic reports of “spoofing” — electronic-warfare interference aimed at Israeli planes — are a reminder that Russian acquiescence to Israeli actions remains conditional.

Those rumblings from Russia are the reason that Israel cannot afford to ride to Ukraine’s rescue.

However ironic Israel’s refusal to help a foreign leader proud of his Jewish roots, it would be simply immoral to turn Putin into a remorseless foe. When a shipment of Israeli rockets to Kiev brings the likelihood of a salvo of Iranian missiles on Jerusalem one step closer, the cost is too high. Lindsey Graham is right: it’s important to stand up for freedom. But in the showdown between Russia and Ukraine, Israel shouldn’t be made to pay the price of American weakness.