Through The David Project, Hillel Takes The Next Step In Engagement 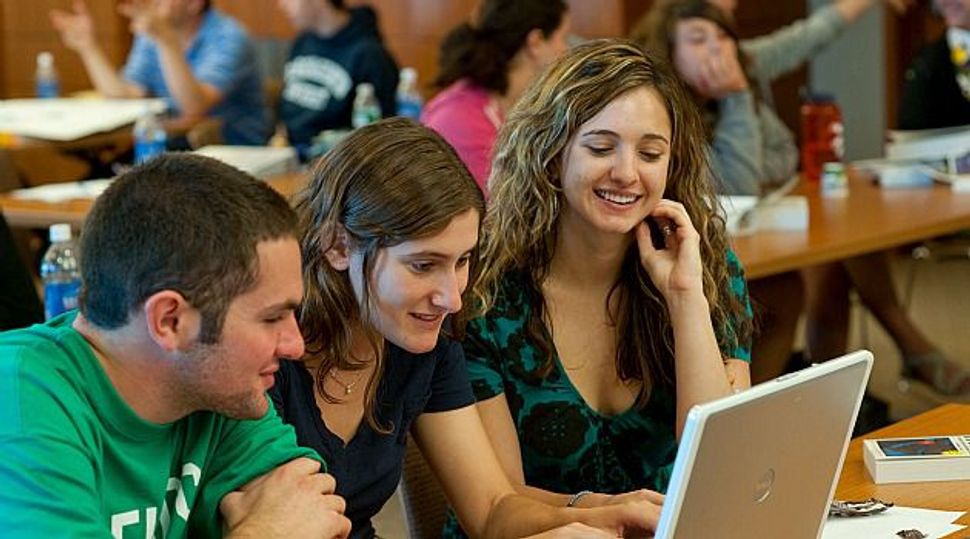 Campus Correction: The David Project gained notoriety for its hardline pro-Israel advocacy on college campuses, which often focused on attacking perceived pro-Palestinian institutions. It is changing tack, in favor of a more positive approach. Image by courtesy of david project

Every day, Hillel brings Israel to the campus – and now, we are taking extra steps to bring the campus to Israel.

That is why Hillel International is proud that The David Project and its effective Israel advocacy programs are now under the Hillel umbrella.

Hillel International’s The David Project builds connections between Jewish and non-Jewish students around Israel. We do this through one-on-one conversations, campus programming and its unique “Israel Uncovered” missions. These opportunities build awareness of Israel as a diverse, multi-ethnic, multi-racial democracy and a strategic friend of the United States. Students learn that Israel is a work of progress and a work in progress and are encouraged to engage with Israel, Israelis and each other to envision Israel’s future. Just as Birthright Israel has strengthened the Jewish connection to Israel, The David Project is creating lasting bonds between young adults of many different backgrounds and the Jewish State.

But perhaps as important, in today’s campus climate, The David Project is bringing together student leaders of multiple faiths, ethnicities and political beliefs around a positive vision of Israel.

Through our joint work, Hillel is combating the false narrative that has taken hold in some corners of the campus that to be a progressive means to be anti-Israel. One of our primary goals is to find opportunities to partner with those who are active in progressive causes: Those who are passionate about police reform, immigration rights, gender issues and civil rights for all who have a claim to greater justice.

At Hillel, we are no strangers to social justice – our students and our professionals have often been early and outspoken advocates for the dispossessed and powerless. And it is our sincere belief that the cause of Israel is a matter of social justice as well.

Through our actions, we demonstrate that even when the campus conversation on Israel is difficult, we are not afraid to engage.

The David Project’s programs, like other Hillel programs, are designed to introduce students to the real Israel—a diverse and living society. Israel is a Jewish state. But Israel is also a diverse state, with a significant non-Jewish population. Of course, Israel wrestles with the inherent tensions that result from pluralism in a modern age – whether it’s between Jew and Arab, secular and religious, white and non-white, urban and rural. Israel is a remarkable experiment in that sense, and deserves close study and respect.

One thing Israel does not deserve is to be dismissed or denied legitimacy. That’s what the anti-Israel movement seeks – to pretend Israel does not exist and should never have existed in the first place. That is the height of anti-Semitism and anti-intellectualism and has no place on a campus. That’s why Hillel is committed to fighting such demonization and to telling the truth about Israel – to everyone who will listen, to everyone with an opinion about the Middle East and to everyone who wants to learn.

We want to make Israel even more accessible to all who are curious about it and want to see it up close. We want to focus in particular on those students who have so far only heard second-hand about this remarkable nation, and who have never seen it or had a chance to study its history.

That’s the mission of our new partnership. Hillel must play a leading role in helping more students – Jewish and non-Jewish – engage with Israel. We send more students on Birthright Israel and other immersive experiences than any other organization. Our Israel Action Program leads the coalition to protect campuses from anti-Israel hostility and offers campuses speakers, cultural celebrations and educational programs about Israel. And our 75 Jewish Agency for Israel Fellows engage nearly 40,000 students every year in one-on-one conversations about what it means to be Israeli.

Hillel has worked with The David Project for years, so this agreement formalizes a long-standing and friendly partnership. We’ve already been working together on 45 campuses, and through our greater coordination, we will accelerate the growth of non-Jewish support for the pro-Israel community on campuses nationwide.

It’s clear that the campus, despite the challenges posed by anti-Israel forces, remains an area of great potential. So many students are curious about Israel and its people. They want to connect with the story of a nation that is one of history’s great miracles – a return of an exiled people, a restoration of a once destitute land, a revolution in culture and technology in the most unlikely of places.

Eric D. Fingerhut is president and CEO of Hillel International. Phillip Brodsky is the executive director of The David Project.

Through The David Project, Hillel Takes The Next Step In Engagement