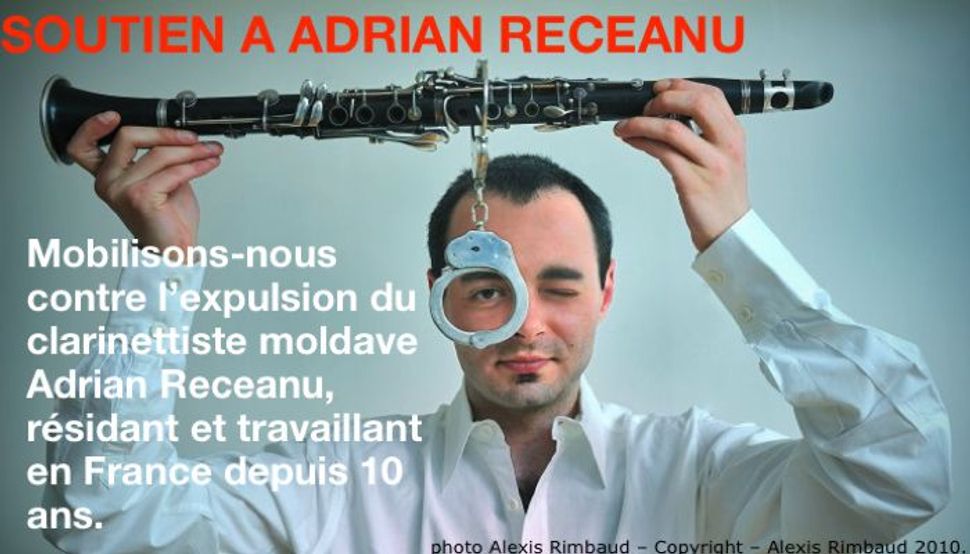 Adrian Receanu, a fixture in the Paris klezmer, Gypsy, Jazz, and classical scenes, received an unpleasant letter from the Paris Police Prefecture on March 11, 2010. The Orwellian — Un avis d’expulsion du territoire français — requires the recipient leave France within one month.

“The French state doesn’t want me,” lamented Receanu in a telephone interview. “I’m one of the 30,000 immigrants who are being expelled,” he said, referring to the Sarkozy administration’s crackdown on illegal immigration.

Only Receanu is not illegal.

Arriving legally in Paris in 2000 to study music on a student visa, he quickly made a name for himself in the burgeoning Eastern European music scene.

“At first I played parties and weddings. Then I moved up to the Russian restaurants,” he remembers. Now he plays with some of the heavyweights in Europe’s traditional music world, including Alan Bern’s klezmer-Lautari ensemble, The Other Europeans Band.

Receanu later married and divorced a French woman. It was while attempting to switch his visa status that he received the expulsion notice.

“My lawyer is confident of my chances of staying,” he said wearily.

Fortunately, friends and fans have come to his aide: a Facebook group formed, a petition circulated, and a benefit concert organized.

“Our goal is also to show that Adrian has a real life here in Paris — friends, fans, supporters and all of the well-known artists that he works with,” said Elie Petit, treasurer of the Union of French Jewish Students, in a blogpost about the concert and Adrian’s situation.

It’s exactly that type of support that Receanu hopes will give his dossier the necessary push to keep him in the Promised Land.

Watch Receanu play klezmer in his own quartet: