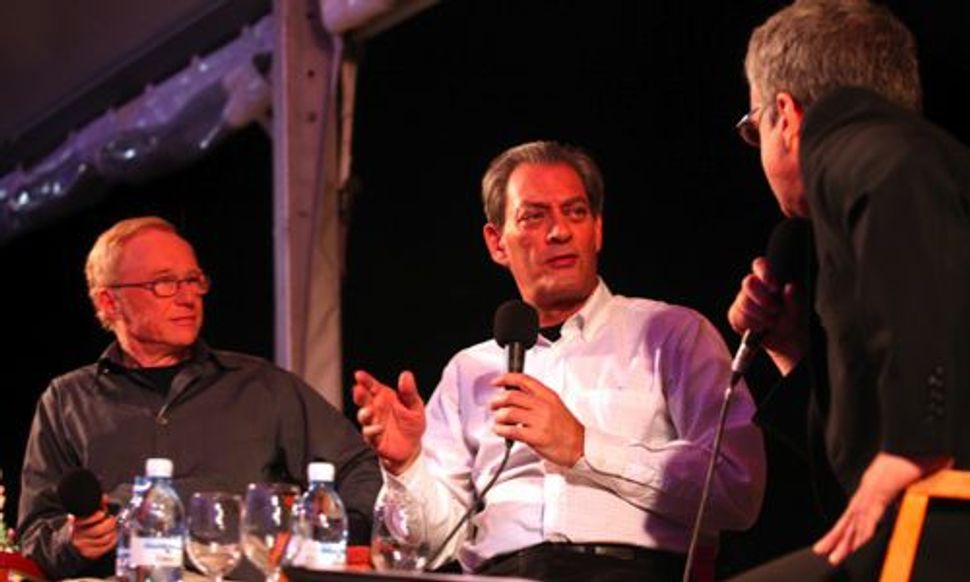 Last night was the first event at the International Writers’ Festival that felt as if there were really star writers among us. Paul Auster and David Grossman entered the event tent through sides held open to accommodate the 500 people crammed into the tent area, inside and outside the tent walls. With a welcome far outweighing the welcome afforded to the President on the opening night, the two authors made their way to the front.

The panel was moderated by Kobi Medan whose long meandering questions seemed designed to validate his presence on the stage rather than elicit interesting responses. Despite Medan’s poor questions, and the two authors and friends agreeing on many things, there were some interesting questions raised about the nature of literature. Grossman maintained that books were active while Auster praised the “sublime uselessness of books.”

The other topic of some interest came out of Auster’s book about a new American civil war. Using that as a starting point, the writers drew the comparison between the situation in Israel and the increasing lack of political courtesy, agreement or even civility. Auster claimed he’d be happy if the Union broke up and Grossman said that he was “humiliated as a human being to collaborate with such despair” as he finds in Israel.

A discussion between two relatively established but non-controversial authors might not have seemed like a not-to-be-missed event, but there were a sprinkling of minor celebrities there, including, obscurely the beautiful but not famously literate Shifra Kornfeld from Israeli reality TV show Big Brother. But, in the end, what is literature but a reflection on, and break from, reality — or television.