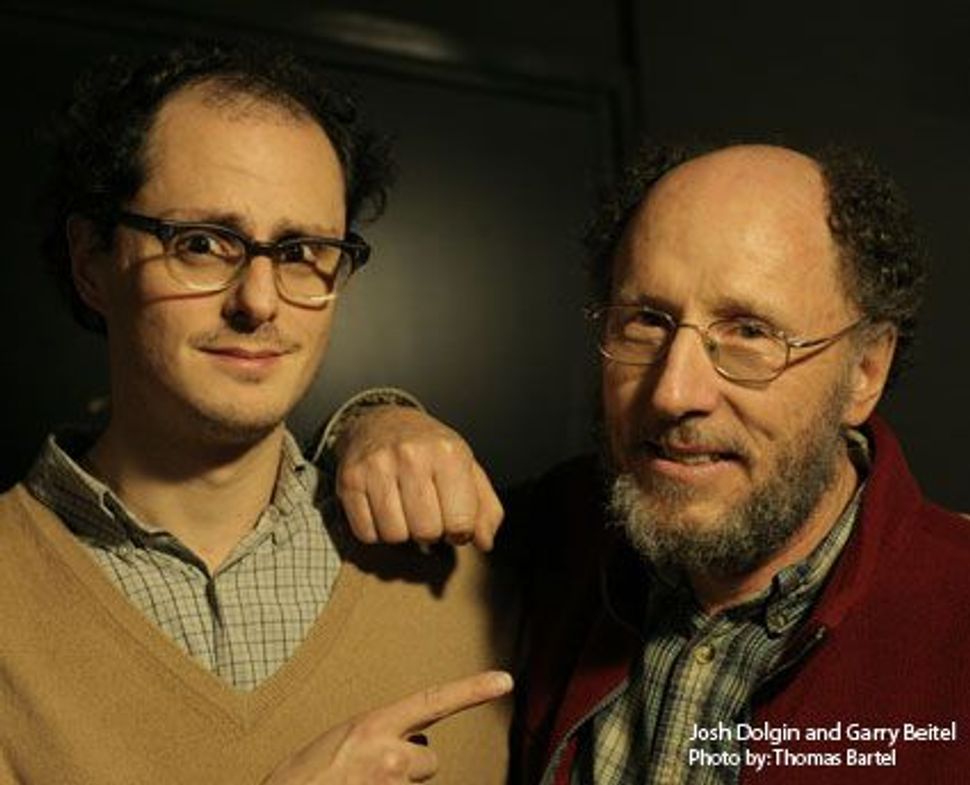 His latest feature, “The Socalled Movie,” looks at Canadian klezmer-fusion king Josh Dolgin, or Socalled, following the bespectacled maestro on a surreal journey through the streets of Paris, the theaters of New York, and the waters of the Ukraine’s Dnieper River, as Socalled explores the various facets of his artistry and his cultural heritage.

The film will be screening on July 27 and August 7 at the San Francisco Jewish Film Festival, at the 92nd Street Y in New York in August, and has been accepted to the Boston Jewish Film Festival in November. In anticipation of the film’s American release, Beitel took a few minutes to chat with Arty Semite contributor Emily Landau about his creative process, klezmer music, and the art of ghetto blasting.

Emily Landau: Why did you decide to start making documentaries?

Garry Beitel: I grew up in a family of storytellers. These were immigrants from Poland after the Second World War and I grew up with my parents, my uncles, my aunts telling stories. The stories usually had a political message, too — they were old communists from the ‘30s and ‘40s. So there was this element of social justice and having an impact on the world and listening to ordinary people, common people. That was the background that I grew up with.

Filmmaking was just one of those things that happened. When I was in university, I got a camera as a present, and documentary filmmaking was a way of translating that interest in ordinary people’s stories and the drama of ordinary life and working people and you and me and people we knew and all of that.

How did you get involved with Socalled?

It goes back to 1998 when Josh Dolgin was a student of mine in a documentary film course that I was giving at McGill [University in Montreal]. I hadn’t seen him in a couple of years, and then I bumped into him at a klezmer concert in Montreal where he and his dad had set up a table, and they were trying to get people to sign up for a klezmer cruise in the Ukraine. And before the night was over, he had convinced me to follow him to the Ukraine and try and get a crew and some funding together to make a film on the cruise.

Were you a klezmer enthusiast before embarking on this project?

I would say that I knew and liked klezmer music as one kind of music. Making this film has been a real education for me. I got much more immersed in it than I ever had been before. Historically, I’ve learned about its origins and the different kinds of klezmer music and the role that it played in Eastern European culture and how it was lost and how the revival began in the ‘70s and how it’s really come into its own.

The film’s structure as a series of short films is fairly experimental. Why did you choose this fragmented approach?

I had to develop a treatment on [Dolgin]. How do I do this? What kind of film would it be? Is it biographical? Is it chronological? Is it about his music? Is it about his person? Years ago, I had seen “32 Short Films About Glenn Gould” by Francois Girard, and the idea just came to me that I could try and do something similar with Josh because there are so many different sides to his creative process that began to interest me, really, as the focus of the film. What I loved about the “32 Short Films” film was that I remembered that as one [fragment] finished and you faded to black, there was a sense of, what’s coming next? What are they going to do next? I thought I’d like to get that same feeling across of, what’s coming?

As you pointed out, a lot of your film deals with the stories of ordinary people. How does “The Socalled Movie,” which focuses on the music world, fit within the rest of your body of work?

It’s both a departure and continuing in the same trajectory. A lot of my work has been devoted to what happens at the borders. I’ve made films about Haitian taxi drivers and their relationships with dominant society, [or] about Hasidic Jews and their relationships with their Quebecois neighbors. And my films have often been a kind of bridge-building process between people on opposite sides. I think that Josh’s music has a similar kind of agenda. He calls it ghetto blasting, but he tries to break down the boundaries between musical genres, between generations, between cultures through his music, and I think it’s not different from a lot of the work that I’ve done in my films.

Where it’s a departure, perhaps, is in the form that the film takes, which is much more experimental, which is much more aesthetic, if you will, but it reflects Josh and how he creates his music and other art. Every film involves certain treatment research. How does the subject deserve to be treated? What’s calling out? And so this is what called out in the film.

Any new projects in the works?

I was in China for a couple of weeks in May shooting a film on Canadian social workers bringing social work principles to work with rural women in China.

So that will be a very similar project to “The Socalled Movie,” I imagine.

Watch the trailer for “The Socalled Movie”: