‘What The Hell Was That?’: Remembering Tuli Kupferberg 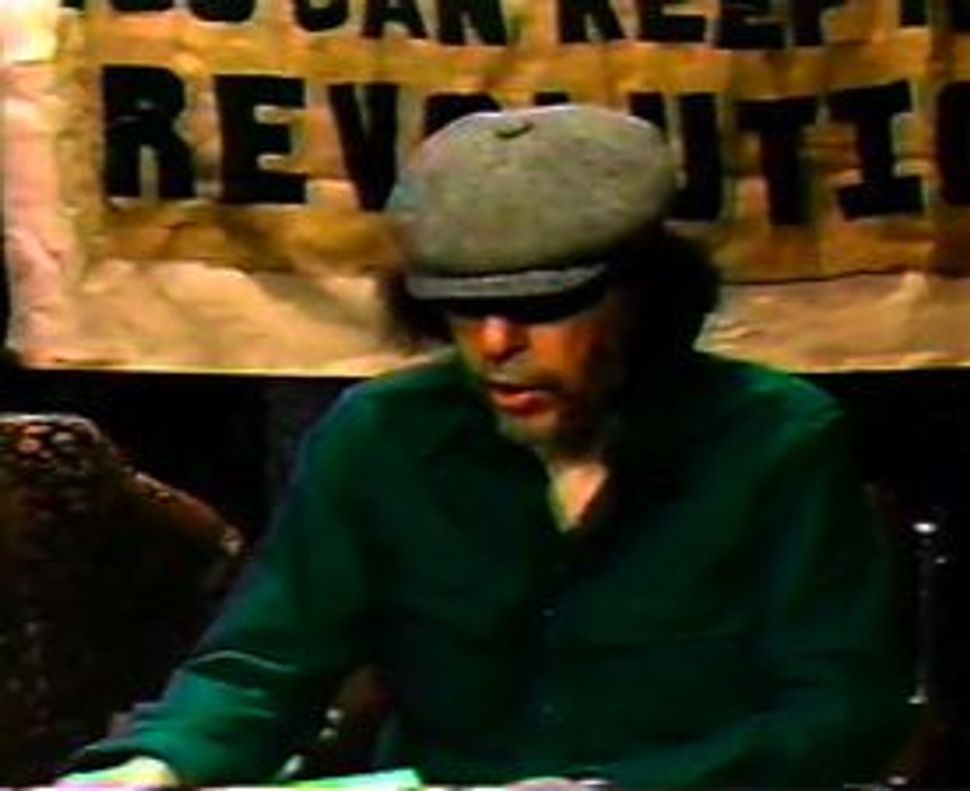 Born Norman (or in Hebrew, Naphtali, hence his nickname), on September 28, 1923, Tuli passed away on Monday at New York Downtown Hospital in Manhattan at the age of 86, after suffering two debilitating strokes.

Tuli became something of celebrity when he was mentioned in Allen Ginsberg’s poem “Howl” as the one who “jumped off the Brooklyn Bridge” and then walked away “unknown and forgotten into the ghostly daze of Chinatown.” It was actually the Manhattan Bridge, but the Brooklyn Bridge seemed more romantic and Tuli didn’t walk away but was brought to Gouverneur Hospital with a spinal fracture.

As a poet Tuli never really considered himself “Beat,” although he was anthologized as early as 1960 in Elias Wilentz and Fred McDarrah’s “The Beat Scene.” He created and published such zines as “Birth” and “Yeah” as well as over 50 of his own books, and was the first to publish the African American Beat poet Ted Joans. In 1964, at the age of 40, he became “the world’s oldest rock star,” as he called himself, after co-founding The Fugs with poet Ed Sanders and drummer Ken Weaver.

Tuli lived two blocks from my apartment. We first met while both of us were hawking our wares on the street, though I had known of him through the music scene, after seeing The Fugs play way back in the ’60s in a loft space on Great Jones street. I had also caught them on various occasions at the Provincetown Theater, The Astor Place Theater, and once at a free concert in Tompkins Square Park, where, to my amazement, I found Charles Mingus standing behind me.

When Tuli and I first talked some time in the mid-‘70’s, he was hawking these pamphlets which were, I think, $1.29 for one and 99 cents for two — the more you bought, the cheaper they became. Tuli’s cartoon prints were also sold on the streets of SoHo at the vending stand of his partner, Thelma Blitz, where Tuli would occasionally hang out to shoot the breeze with the locals. I was directly across the street, selling LPs and books.

Tuli always said that he hated poetry and the scene in general, though he tolerated me and a few others. He was never hierarchical and didn’t choose his friends based on their status in the art world, but rather on his ability to share his knowledge, wit and love with them. Many were the times we sat together in the park sharing a pint of Haagen Dazs or a Good Humor bar. He loved ice cream, especially chocolate.

Yiddish was Tuli’s mother tongue and he had an interest in Yiddish theater, which he shared with fellow poet and street vendor Harry Nudel. On The Fugs’ last CD he wrote the poignantly beautiful “Where is My Wandering Jew Tonight” and “Chameleon,” which includes the lines “In winter I’m a Buddhist / In summer I’m a nudist / In Jerusalem…Talmudist.” Though Tuli loved being a Yid, he was also an avid supporter of Palestine.

Tuli used to take familiar tunes and write his own lyrics to them, calling them “para-songs.” He did this more and more in later years. While bedridden he wrote a series of short pieces he called “perverbs,” twisting well-known aphorisms and posting them on YouTube. As he said in one if them, “Life is funny, you can die.”

Just as darkly comic is a story Fugs drummer Coby Batty told me on the day Tuli died. One day while walking in Brooklyn, Tuli turned to him and declared his own perfect epitaph: “What the hell was that?”

‘What The Hell Was That?’: Remembering Tuli Kupferberg