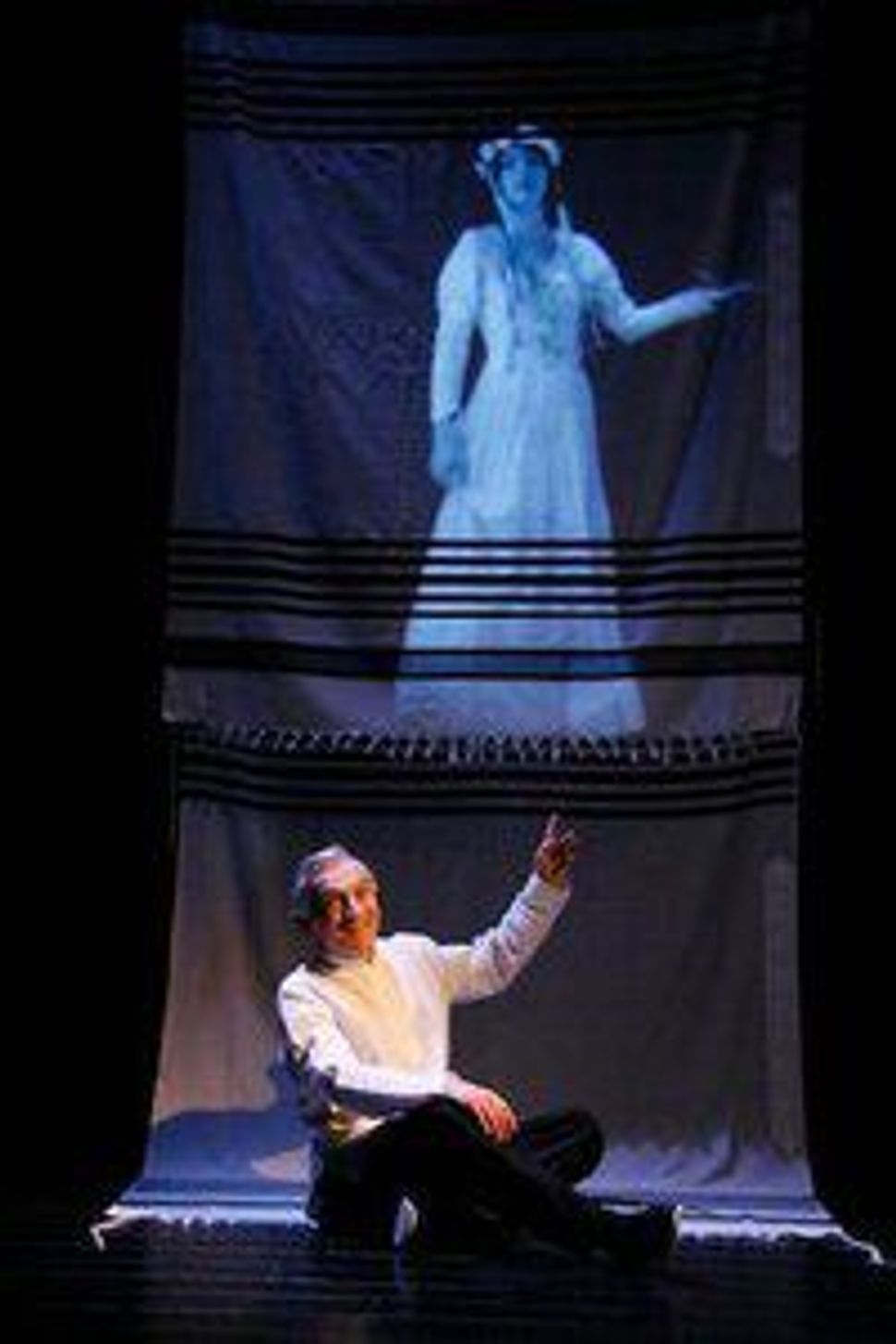 “A Gilgl Fun A Nigun” tackles the problem of bringing the Yiddish theater tradition into the present by using new media to tell the I.L. Peretz story of a melody that travels through space and time. Creator, performer and director Rafael Goldwaser narrates the tale in Yiddish, while English supertitles and video images project onto a series of prayer shawls behind him, accompanied by the nominal song in its various musical forms.

As the play progresses, the melody transforms in the hands of a fiddle player, roaming from a village wedding all the way up to concert halls and orchestras, then back down to the forlorn wailings of a blind orphan girl, and finally to the ears of a scholar, played on the video projection by Goldwaser.

The show plays similarly to the one-man pieces of the mainstream Western theater tradition, which live or die by the talents of their performers. On that front, “A Gilgl Fun a Nigun” is served beautifully by Goldwaser, who brought the production to the Fringe from Le Theatre en L’Air, his theater company in Strasbourg, France.

Goldwaser’s relentless energy and charm keep the performance well-paced and engaging, and his commitment makes some of the trickier media transitions work. The show’s most enjoyable moments are the ones where he plays with these transitions, revealing a childlike fascination with them: A video projection of his upper half will appear on a backdrop, with his real legs and toes wiggling out underneath it; a video projection of Goldwaser walking up stairs culminates in him poking his real head out, just above the surface.

Unfortunately, his enthusiasm coudn’t salvage the production from its rampant technical problems. The 4th Street Theater’s tiny stage was too small to comfortably house Goldwaser’s often-frenetic multimedia vision; he had to waste a lot of energy running around, moving set pieces and getting out of the way of the constantly moving supertitles — a task at which he didn’t always succeed.

The show is only partially translated, and I didn’t need the precisely four words of Yiddish I know to realize that the text didn’t sync up with Goldwaser’s narration (a sentence about a toothless dog would flash up; five minutes later Goldwaser would wrap his lips over his teeth and start gnawing). Obscuring parts of the narration from English-hearing ears, no matter how insignificant the words may or may not be, is alienating, and the technical defects deepened my confusion to the point of frustration.

Following its run at the Fringe (there are two additional performances on August 22 and 24), “A Gilgl Fun a Nigun” will return to Manhattan in November as part of The National Yiddish Theater Folksbiene’s “New Worlds: A Celebration of I.L. Peretz.” With some retooling it may indeed appeal to New York theatergoers of every stripe; Goldwaser’s charm and Peretz’s text certainly have the power to make a strong argument for Yiddish theater. But that argument can only be made if clarity becomes a higher priority.

Watch a scene from “A Gilgl Fun a Nigun”: