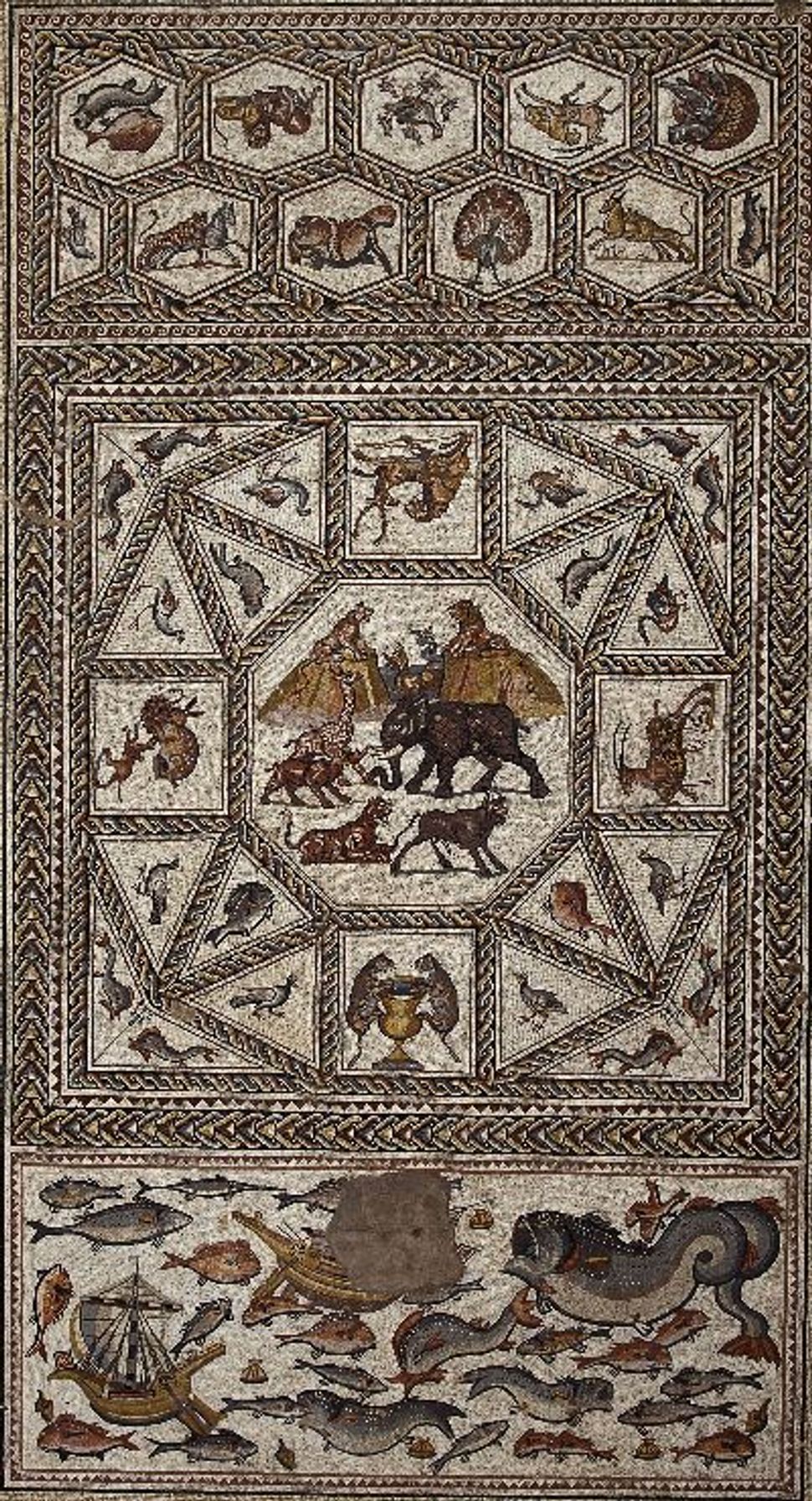 A fourth-century mosaic discovered in Lod. Click for larger view. Image by Metropolitan Museum of Art

According to the museum’s press release, “because the mosaic’s imagery has no overt religious content, it cannot be determined whether the owner was a pagan, a Jew, or a Christian.”

But virtually all of the animals depicted in the work — birds, bulls, a deer, a donkey, ducks, an elephant, fish, gazelles, a giraffe, hares, leopards, lions, a sea monster, a snake, peacocks, a rhino and a tiger — carry Jewish symbolism.

According to Shlomo Pesach Toperoff, author of “The Animal Kingdom in Jewish Thought,” the following animals carry biblical and rabbinic symbolism: donkeys (transportation, redeeming firstborn donkeys per Exodus 13:13, symbol of Issachar), birds (the mother must be shooed before accessing the eggs, doves as peace symbols), elephants (per Berakhot 56b, a wonderful sign when seen in dreams), fish (eaten on Rosh Hashanah to symbolize multiplying), gazelles (frequent appearances in “Song of Songs,” its speed idealized in “Ethics of the Fathers”), harts and hinds (symbol of Naphtali), bulls (the Red Heifer), leopards (a character in Daniel’s dream, cited in the same part of “Ethics of the Fathers” as the gazelle), sea monsters (the Leviathan, a Talmudic regular), lions (tribe of Judah), peacocks (brought by King Solomon from Tarshish) and serpents (Edenic embodiment of evil, symbol of Dan).

Hares are sometimes depicted in scenes of Esau returning from the hunt in haggadahs, according to Marc Michael Epstein, professor of religion and Jewish studies at Vassar College and author of the book “Dreams of Subversion in Medieval Jewish Art and Literature,” which examines animal references in medieval art.

The Torah is referred to as a “loving doe” in the Shavuot prayers, Epstein adds, and hare hunts appear in haggadahs.

The ducks, giraffes, rhinos and tigers stand alone, but shouldn’t 13 of 17 be compelling enough?

Epstein, who has not seen the mosaic in person or studied it carefully, says his first impression is that the symbols appear in enough non-Jewish medieval and ancient works that they do not necessarily imply a Jewish program.

Christopher Lightfoot, curator of Greek and Roman art at the Met, agrees, calling the motifs “part of the common stock of popular subjects used throughout the Roman world, some of which were subsequently drawn upon in Jewish and early Christian settings,” though the images’ pagan origin “seems incontrovertible.”

Some scholars have tried to see references to the “Peaceable Kingdom” (per Isaiah) in the animal kingdom mosaic, Lightfoot says. “However many of the scenes show predators and prey, which rather speak against such an interpretation and a Jewish association for the mosaic.”

Lightfoot’s argument is surely a sound one, but those who still cling to the possibility of a Jewish angle might find ammunition in Epstein’s analysis of hare (and other) hunts in Jewish art, which are often characterized as much by their absurdity as they are by any logical interpretation of hunts in nature.

Perhaps there might even be a connection between the reversal illustration Epstein found in a haggadah — where a dog serves wine to a half dressed hare — and the panel in the middle of the mosaic, where a dog and a hare fight over a bunch of grapes. Jews did like to drink, after all.