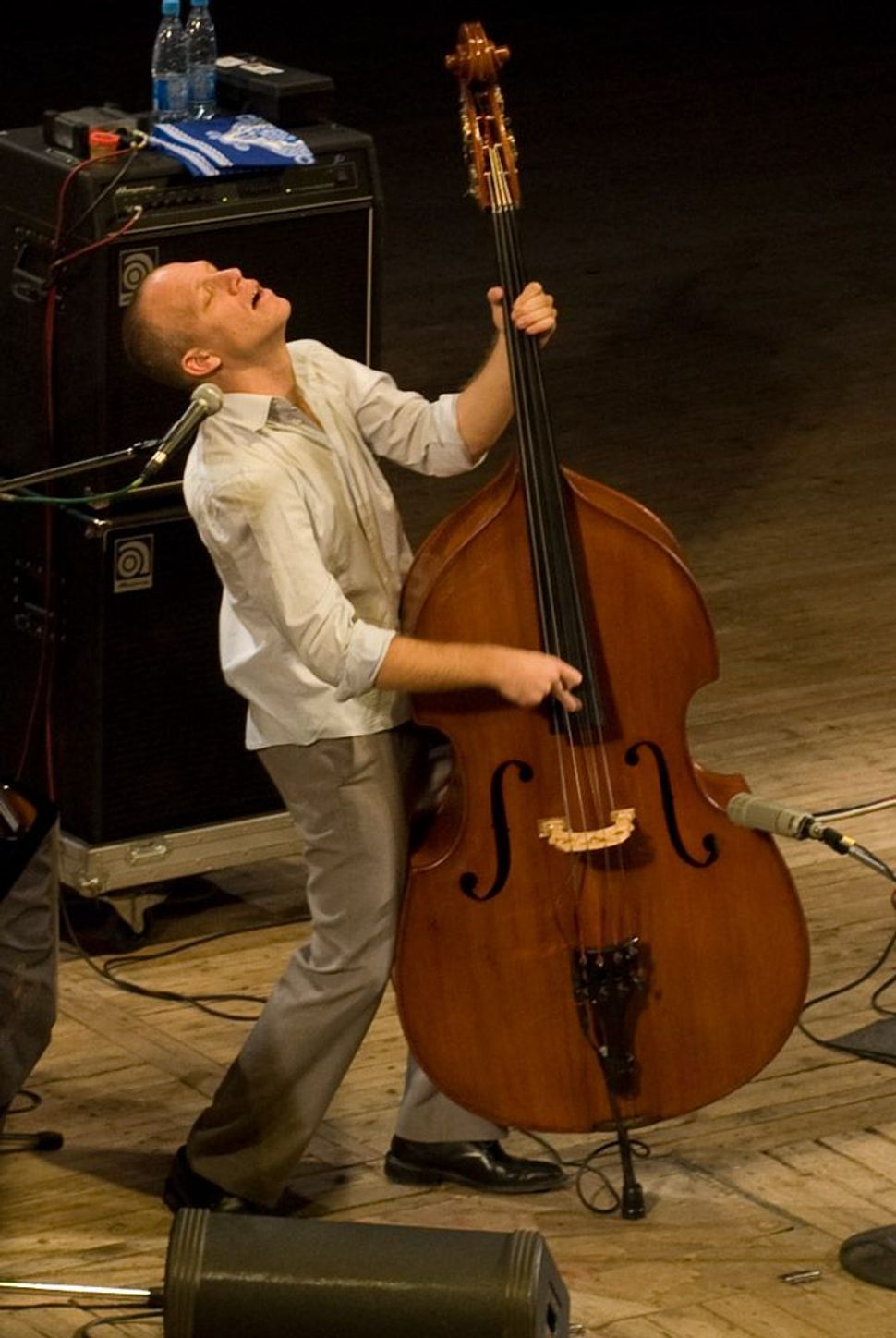 Cohen was born in Israel in 1970 to a musical family. Inspired by legendary bassist Jaco Pastorius, he took up electric bass as a child. After serving in an Israel Defense Forces army band, Cohen moved to New York, where he lived for 12 years, working with artists in the city’s Latin jazz community, and playing alongside pianist and composer Chick Corea. After releasing four albums with Corea, Cohen launched a solo career on his own label, Razdaz Recordz. Now based in Tel Aviv, Cohen is back in the United States in support of his latest album, “Aurora.” Cohen’s 11th release, “Aurora” is the first to showcase his vocals, and includes songs in Hebrew, English, Spanish and Ladino, the language of Cohen’s Sephardic roots.

Taking the stage alone, Cohen began with a long improvisation on his double bass. His playing is flawless — warm, rich and inventive. Leaning low over his instrument, he used the entire length of the strings, even snapping at them below the bridge. Cohen’s bass anchored the performance, working in and out of pianist Shai Maestro’s jazz-inflected melodies, trading pops and trills with percussionist Itamar Doari, and taking long solos in which Cohen played melody, harmony and percussion, turning his instrument into three as he plucked and slapped its strings while drumming on its sides. Cohen’s singing — a rich tenor that’s not far from the tone he draws from his bass — was thickly emotive, working in close harmony with vocalist Karen Malka.

Cohen’s music is a branch of jazz grafted onto a number of other traditions. Its clean, seamless surface, which gives it a poppy feel, reflects the rhythmic influences of Latin and Afro-Carribean jazz, passed through the folkloric traditions of Cohen’s Arab-Andalusian and Hebraic cultures. The result is a deeply personal sound that moves smoothly between genres: In “Lewlam,” oud player Amos Hoffman begins with a spacious Middle Eastern melody as the song crescendos into an arpeggiated piano solo, before Cohen and Malka enter with vocals that are almost a chant.

Cohen was still a resident of New York when what he calls “the twins” came down, and, performing in what would have been their shadow, he paid them tribute with his song “Remembering.” The song was simple and slow with piano and bass trading a classically melodic line over Doari’s brushed cymbals. They followed with “Alon Basela,” which was, Cohen said, about “resiliency, and the power to have power over things that happen.” He and Malka sang a strong rising line in Hebrew, the melody simple and heartfelt. The song was the mirror image of “Remembering” — a tribute not to loss but to the power that emerges from it. Toward the middle of the song, the band left the stage, leaving Doari to play alone in his own little world of cymbals and bells. Doari was one of the great surprises of the group — his technical skill is breathtaking, but even more impressive was the subtlety of his playing. The sounds he coaxed from the cajon, dumbek, and udu were almost symphonic, and, when called for, he tossed himself at the cymbals in a way that made the connection between music and spiritual experience clear.

Much of Cohen’s music has this devotional quality, expressive of both hope and lament. Above his athletic bass playing the singing often had the cadence of prayer. It was delightful then, when for the last song of the encore, the band had a little fun, playing “Para El Monte,” an energetic Latin number which paid tribute to Cohen’s Nuyorican influences. The audience, unable to resist the band’s warmth and exuberance, stood and danced in the Winter Garden’s strange, palm-studded oasis.