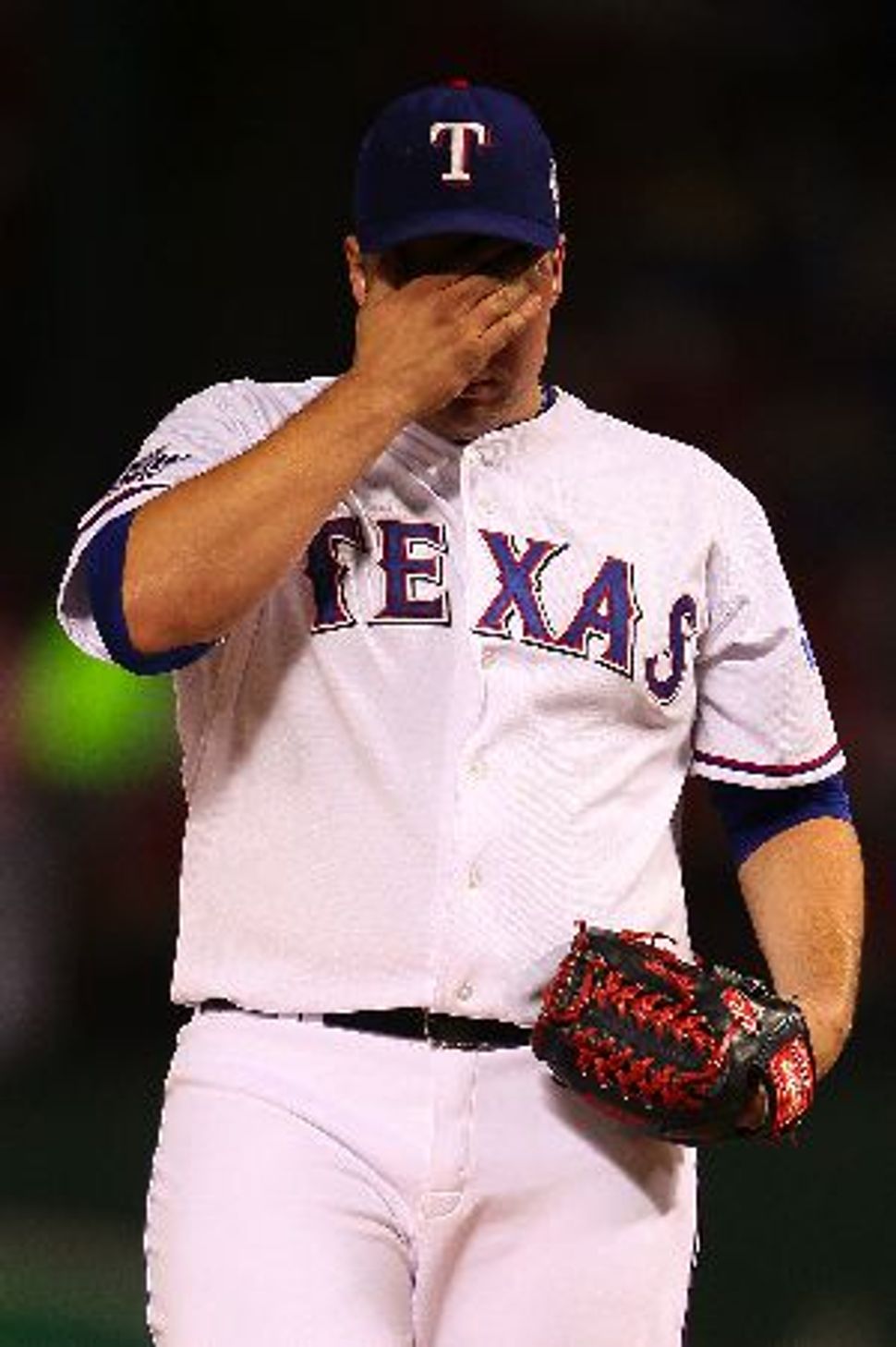 Tommy Hunter of the Texas Rangers during Game Four of the World Series. Image by Getty Images

Like many GMs, Daniels is known for using sabermetrics, a data-driven approach to baseball. Sabermetricians believe that reserving the team’s best reliever for the ninth inning is ludicrous. Yes, the game technically ends in the ninth, but more often the crucial moment comes with runners on and few outs in the seventh, or eighth; the team should use its best reliever then to shut the opposing team down instead of waiting until the game is essentially decided. These two Rangers’ postseason games could easily be exhibits A and B in the case against the closer.

Jews have always been interested in baseball, playing it and aestheticizing it through literature. But what’s different about the work of GMs like Daniels, Theo Epstein of the Red Sox, and Cleveland Indians President Mark Shapiro is that their approach to the sport is driven by a vibrant intellectualism that emphasizes debate and developing new methodologies.

With apologies to String Theory, no intellectual movement of the last 30 years has had as much of an impact as the sabermetric revolution. While sabermetrics takes the form of rigorous data analysis and the creation of more advanced statistics, the driving ethos of the movement is a willingness to fundamentally rethink what baseball — or any system — is and how it works.

In that regard, the Jewish move into baseball is not unlike the Jewish move into English literature in the 1940s and ‘50s, when writers like Leslie Fiedler and Saul Bellow redefined how we saw the American novel. Fiedler’s 1948 Partisan Review article, “Come Back to the Raft Ag’in, Huck Honey!” opened questions of sexuality, gender, and race by exploring the homoerotic dynamic in “Huckleberry Finn,” while Bellow brought a new Yiddish-inflected language to the novel.

Neither sabermetrics nor the New York Intellectuals are Jewish movements, but the strong critical and ideational aspects of both encourage Jewish involvement. Chaim Bloom even went from writing baseball criticism for Baseball Prospectus to working for the Tampa Bay Rays — which would be like Lionel Trilling transitioning from theorizing about Mathew Arnold’s views on culture to physically transforming into Mathew Arnold.

Like all important intellectual movements, sabermetrics has begun to spread from its roots in baseball. Its data-consciousness moved into politics when Baseball Prospectus’s Nate Silver founded fivethirtyeight.com with the purpose of rethinking polling. The increased emphasis on performance-based teacher evaluations and meta-analyses in medicine suggest that there will be many new markets for statisticians who are unafraid of challenging the tenets of their fields.

It’s only a matter of time before sabermetrics changes our understanding of Judaism, just as the literary and philosophical tools that developed since the 1950s altered our understanding of how it evolved through contact with other religions and cultures. Howard Megdal’s “Baseball Talmud” used sabermetrics to determine the best Jewish players at each position, but what about using the tools of baseball to look at the Talmud? We all know that Hillel was the dominant rabbi of his era, but just how dominant was he? How many arguments could we expect the next available rabbi to win? Sabermetricians invented “Value Over Replacement Player” (VORP) as a way of figuring out a player’s relative worth over a readily available replacement — well, just what was Hillel’s Value Over Replacement Pharisee? Which rabbis are over- and under-rated by this metric?

Value Over Replacement Pharisee may be a trivial statistic, but other data-driven approaches to Jewish history and culture won’t be. Judaism is always open to new questions and modes of interpretation, and as sabermetrics inspires Jewish Studies, it will subsequently change our view of Judaism.