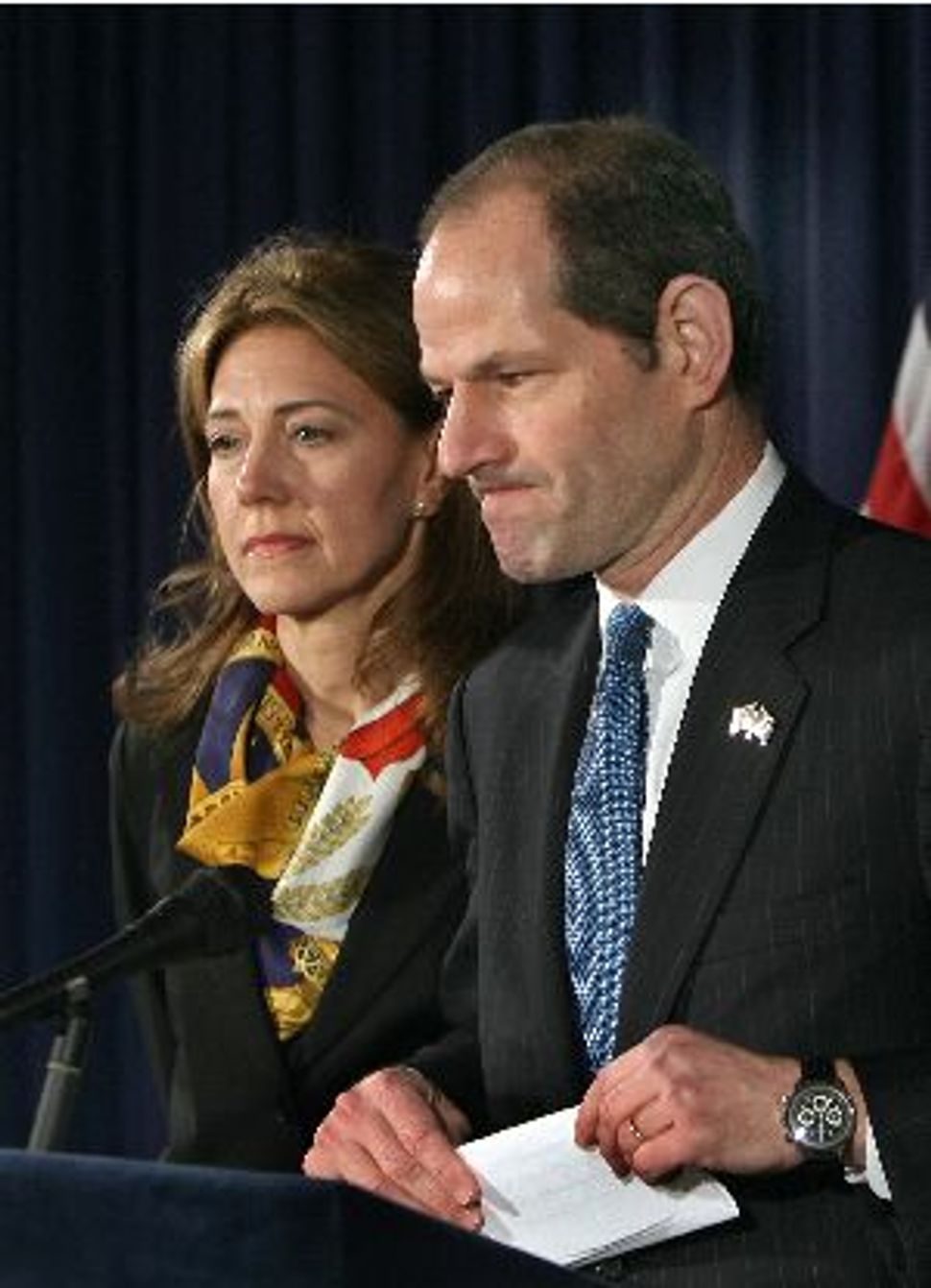 Eliot Spitzer addresses the media with his wife Silda Wall to announce that he will resign from office after revelations that he had been a client of a prostitution ring. Image by Getty Images

As the self-appointed “Sheriff of Wall Street,” Eliot Spitzer did fine work rounding up these overpaid criminals and muscling them into the national spotlight. As New York’s Attorney General, Spitzer exceeded the call of duty, setting his sights not just on local scam and flam artists, but on all kinds of corporate and securities hucksters. He was the brash, two-fisted brawler who knew that the only way to clean up white-collar America was to bust the right skulls. He was a thorn in the side of rich white men hoping to hold themselves above the law and moral responsibility. To others, he was kind of a hero.

Then he had to go and have sex with a couple of prostitutes.

Alex Gibney’s Spitzer documentary, “Client 9: The Rise and Fall of Eliot Spitzer,” takes its name from the moniker used in an affidavit that linked Spitzer to 22-year-old escort Ashley Dupre, setting the stage for a sex scandal that resulted in Spitzer’s resignation as Governor of New York State. But while Spitzer’s extramarital boot-knocking may serve as Gibney’s hook, it’s really fairly incidental to his film. Because really, “Client 9” is about Spitzer the Robin Hood-style sheriff, the hard-nosed face of the Democratic Party who could have been president, if only he hadn’t pissed off so many people with the resources to bring him down.

“Client 9” traces Spitzer’s career in law and politics, from the important financial lesson he learned as a kid after being foreclosed on in Monopoly (by his father no less), to the fallout of the sex scandal that stripped him of super-delegate status and left the uncompromising reformer at the mercy of editorial cartoonists across the United States. Spitzer’s story is exceptionally fascinating and inspiring for the many people who only caught whiffs of him as the result of his broadsheet shaming. And while Gibney never really poses the problem explicitly, “Client 9” nevertheless begs us to question the politics of scandal.

Because really, so what if Eliot Spitzer paid for a little hanky-panky? It may be disrespectful to his wife and family, sure. But we don’t know the particulars. Maybe the guy was unhappy in his marriage and needed to get off with the kind of discretion generally guaranteed by $1,000-per-hour escorts. Maybe his meteoric rise through New York politics and inflated reputation got to his head and he felt he needed to get horizontal with some young, 10-out-of-10-types he didn’t deserve. Maybe he could have covered his tracks a bit better, all things considered. But in the end, who cares?

Americans still love Bill Clinton, and his Oval Office oral was a far more egregious offence — not just because of his station, but because he was fundamentally violating the tacit (and more often than not explicit) boundaries of an employer-employee relationship. Spitzer’s sexual slip-up was just a golden moment for the legion of knives-drawn Bruti to stick him like a pig. Because in a thinly-veiled Christian theocracy, the only sin more shameful than sex is sex outside the consecrated bonds of marriage.

“Client 9” doesn’t necessarily come down unequivocally on the side of Spitzer as shamed patsy, but it does do justice to his career before the scandal. In a political climate marked by fierce partisanship and sluggish, incremental legislative change, Spitzer had the brass balls necessary to make real headway. Granted, he’s a hypocrite for getting caught in the kind of high-end prostitution ring he helped bust up as Attorney General. But who isn’t a hypocrite? Who among us doesn’t violate the high standards we set for ourselves? Spitzer may have fumbled his responsibilities as husband and father, but if that in itself was headline news in America, the dailies would have no room for Ziggy or Sudoko (or those alluring spots in the back pages offering BBBJs and GFEs at reasonable rates).

Just two years out from Spitzer’s sex scandal, we probably haven’t moved beyond the politics of scandal. But Alex Gibney’s riveting “Client 9” makes a compelling case for why we should.

Watch the trailer for ‘Client 9: The Rise and Fall of Eliot Spitzer’: