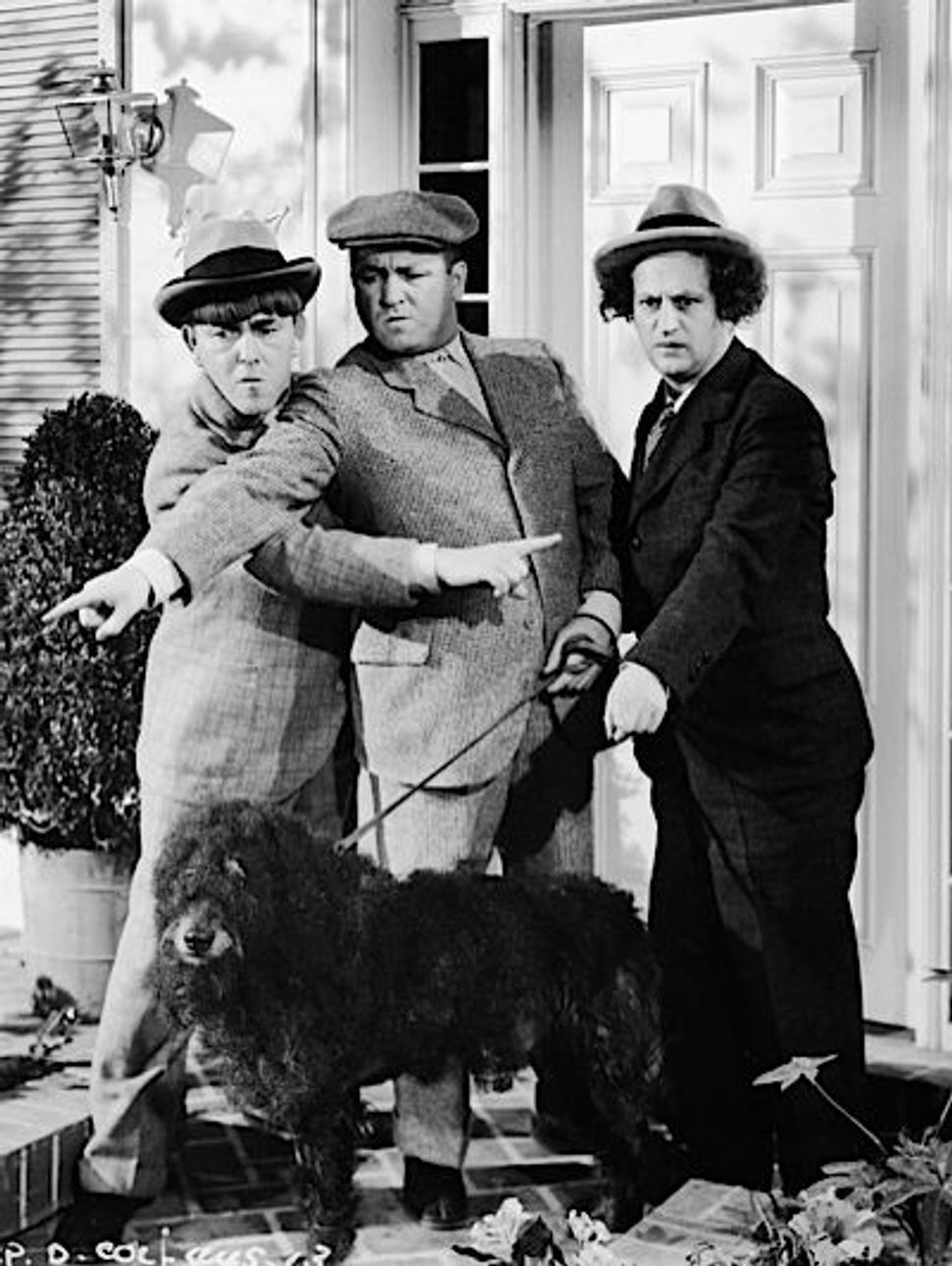 The storeowner said no malice was intended, and pointed to other shirts in the shop that praise the President. For us, however, there was no need to explain, as we see the comparison as complimentary. After all, the Three Stooges, who are being honored on December 13 at the Three Stooges Film Festival in Albany, as well as in a forthcoming Three Stooges Movie, were pioneering geniuses of comedy.

Despite his violent made-for-TV antics and persona, Moe, according to his daughter Joan Howard Maurer of Los Angeles, was a devoted family man, married to Helen Schonberger for 49 years. She told The Arty Semite that after her Aunt Fanny warned Schonberger “if you marry an actor, especially in vaudeville, you’ll never have a home,” Moe saw to it that his wife, daughter and son Paul lived in a beautiful English Manor and had a stable family life.

Maurer, whose late husband, artist and producer Norman Albert Maurer illustrated Three Stooges comic books, has written “The Three Stooges Book of Scripts” and “Curly: An Illustrated Biography of the Superstooge.” She has also co-authored several others, including “Moe Howard and the 3 Stooges,” written by Moe and compiled by Joan after his death at age 77 in 1975.

In addition to their success in the early days of television and film comedy, the Three Stooges were unafraid to confront political issues. Their 1940 short “You Nazty Spy,” was the first Hollywood film to spoof Hitler (it was released nine months before Charlie Chaplin’s “The Great Dictator”), and Moe was the first American actor to portray him. The film, directed and produced by Jules White and written by Felix Adler, featured Moe as Dictator Moe Hailstone, Curly as Field Marshall Gallstone, and Larry as Minister of Propaganda Pebble. The trio, who ruled Moronica, resembled Hitler, Göring and a mix of Göebbels and Joachim von Ribbentrop in a period when the United States was still officially neutral. The spoof was made possible because although the Hays Code restricted political content in films, shorts were not as tightly regulated.

The Stooges remembered their Jewish roots, and Yiddish often made it into their repartee. 1941’s sequel, “I’ll Never Heil Again,” included frequent use of the Yiddish word “beblach” (beans). Maurer tells a tale in her upcoming book, “Stooge Kids,” about a lobster claw that was actually made of sugar, because Moe wanted to remain faithful to the dictates of Judaism.

“Dad had this dislike for most shellfish,” Maurer recalled. “It stemmed from my grandmother’s kosher dietary rules: no crab, no lobster, no shrimp,” she said. “One day, on the set in a scene in a Stooge comedy, Dad’s role was to discard the meat from a lobster claw and eat the claw.” But she said that the thought of putting that claw in his mouth made Moe ill. “To solve this problem, the special effects man on the film had to fashion one out of rock candy,” she said.

Maurer also cast a positive spin on the Stooges T-shirt bearing the faces of Obama, Biden and Pelosi. “Other presidents received this same honor in the past,” she said, citing Richard Nixon and John F. Kennedy as two American leaders linked to the Stooges. If anything, the comparison proves how popular and funny the Three Stooges still are.

Listen to an interview with Moe Howard from the 1970s: