Abe Foxman: Don’t Judge My Book by Its Cover (But Feel Free To Remove It) 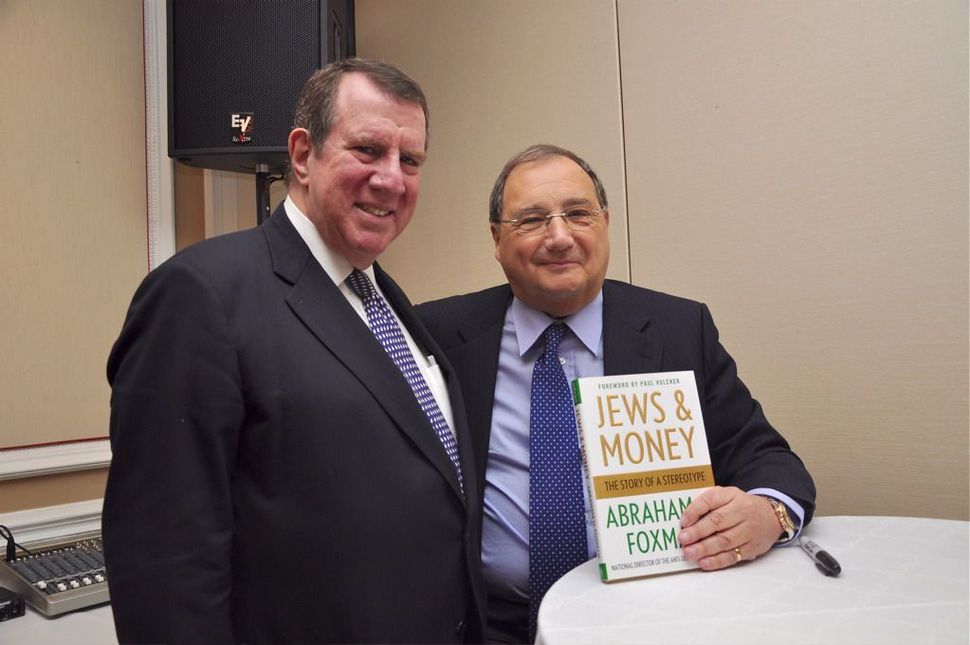 Don’t judge a book by its cover is a phrase that can warm any author’s heart. But how does an author react when readers tell him that they remove the cover when reading his book in public? If you’re Abraham Foxman, the national director of the Anti-Defamation League, you accept the feedback knowing you’ve done your job.

So Foxman said at a party Tuesday night at Manhattan’s Loews Regency Hotel to celebrate his latest book, “Jews & Money: The Story of a Stereotype,” published last month by Palgrave Macmillan. The host of the party was co-chairman of Loews Corporation Andrew Tisch, who along with Donald Trump and Michael Steinhardt, have contributed blurbs for the book jacket (Trump calls it a “must-read”).

Among the guests was Irshad Manji, director of the Moral Courage Project at New York University and author of “The Trouble with Islam Today: A Muslim’s Call for Reform in Her Faith,” and Bill Siegel, a television executive who is on the board of the Hudson Institute.

It was Palgrave Macmillan who pushed for the title for Foxman’s book. The author had wanted it to be, “Jews, Money and Anti-Semitism,” but that didn’t have enough zing for Macmillan. “It sounded boring,” admitted Foxman, so it was changed..

“Jews & Money: The Story of a Stereotype,” makes a deliberate and even-tempered case about a fiery subject. In several short essays, Foxman argues there is no “special, sinister” connection between Jews and money. A close look at the ways the media handles Jewish subjects suggests its role in perpetuating the stereotype. For example, Bernard Madoff’s Jewishness was often mentioned in press accounts, Foxman writes, while rarely was he described as an Italian. Foxman also looks at Jewish philanthropy and stereotypes embedded in popular culture, such as television shows like “The Nanny” and “All in the Family.”

As for the cover, perhaps those who assemble for his talk at the 92nd Street Y this Sunday evening will be brave enough to keep theirs visible. The discussion will be moderated by writer Thane Rosenbaum and CNN correspondent Allan Chernoff.

Abe Foxman: Don’t Judge My Book by Its Cover (But Feel Free To Remove It)