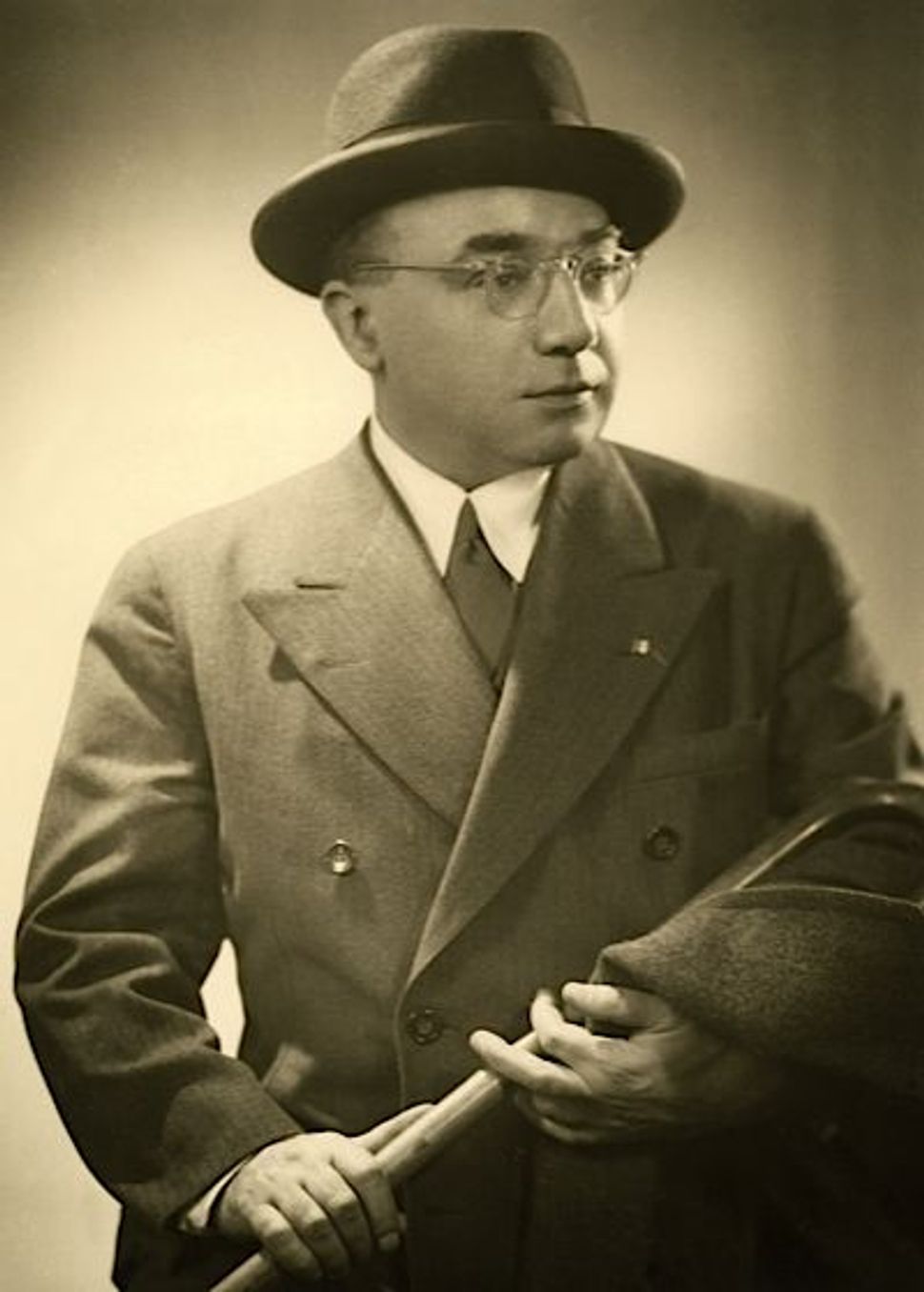 Szyk has no respect for the tyrants who oppress Jews. In a drawing titled “Valhalla” he satirically portrays Hitler and Mussolini as beer hall waiters serving rowdy Nazi soldiers, one of whom tramples a prostrate Jew. “De profundis,” a more startling 1943 pen and ink response to Nazi cruelty, depicts Christ holding the Ten Commandments atop a pile of war victims, many of them Jewish. A Torah and yarmulkes on bearded heads can be seen among the fallen. Ornately lettered words above the tumbled mass of men, women and children ask: “Cain, where is Abel thy brother?”

View a slideshow of images by Arthur Szyk:

The artist did not forget the fallen or his homeland after he left Poland and arrived in the United States in 1940. Szyk was fully aware of the tyranny in Europe, and sounded the alarm as eloquently as he could through detailed illustrations of distress, some of them widely circulated. A 1941 caricature first printed on the cover of Collier’s magazine portrays Hitler and Stalin playing a card game while being watched by the skeletal figure of Death — clearly the winner who will take his share from all sides.

The small, intricate pen and ink and watercolor pictures are not all satiric. Syzk’s 1945 drawing for the cover of the secular Jewish journal “Answer” portrays the Jews of the Warsaw ghetto as heroes, above the title: “Samson in the Ghetto.” He also honors Esther, Judith, Ruth, David, Saul and Solomon by depicting the biblical characters in gorgeously colored costumes, on the backs of playing cards.

Szyk is probably best known for the beautiful Haggadah he illustrated in 1940. The ornate Passover book printed on vellum (the first edition was limited to 250 copies which sold for $500 each) can be favorably compared to rare, illuminated medieval manuscripts. Irvin Ungar, curator of the Arthur Szyk Society, notes in a Legion of Honor brochure that this Hagaddah “draws a parallel between Nazi Germany with its attempted annihilation of the Jewish people and the ancient Egyptians of the Exodus narrative…” and it continues the artist’s fervent “commitment to freedom and democratic ideals.”

Through his art the illustrator addressed Jewish themes, but also paid tribute to the League of Nations covenant, to Polish and American history, Picasso, Joan of Arc, Native Americans, and Thomas Jefferson’s protest against tyrants. One mark of his interest in diverse cultures is the variety of languages inscribed in Syzk’s pictures; they include English, German, Spanish, Hebrew, Yiddish and French. Also versed in world literature, he earned some of his income and admirers through limited edition book illustrations for “Andersen’s Fairy Tales,” “Arabian Nights,” and “Canterbury Tales.” Many of Szyk’s miniatures include fascinating details that delight on close examination, which explains why the museum loans magnifying glasses to gallery guests. Look closely at “The Scribe” and you see babyfaced cherubs holding a dollar bill as if it is proof they trust in God and the free market.

While Szyk’s illuminations and caricatures won praise in the past, they have not been shown in San Francisco’s prestigious Legion of Honor since 1941. Rather than wait another 70 years for his art to return again after this exhibit closes, I would prefer to see pictures such as “De Profundis” placed in the museum’s permanent collection, to accompany its other great religious portraits; what could be more ecumenical than Szyk’s Christ holding the Ten Commandments alongside earlier Renaissance depictions of Him?