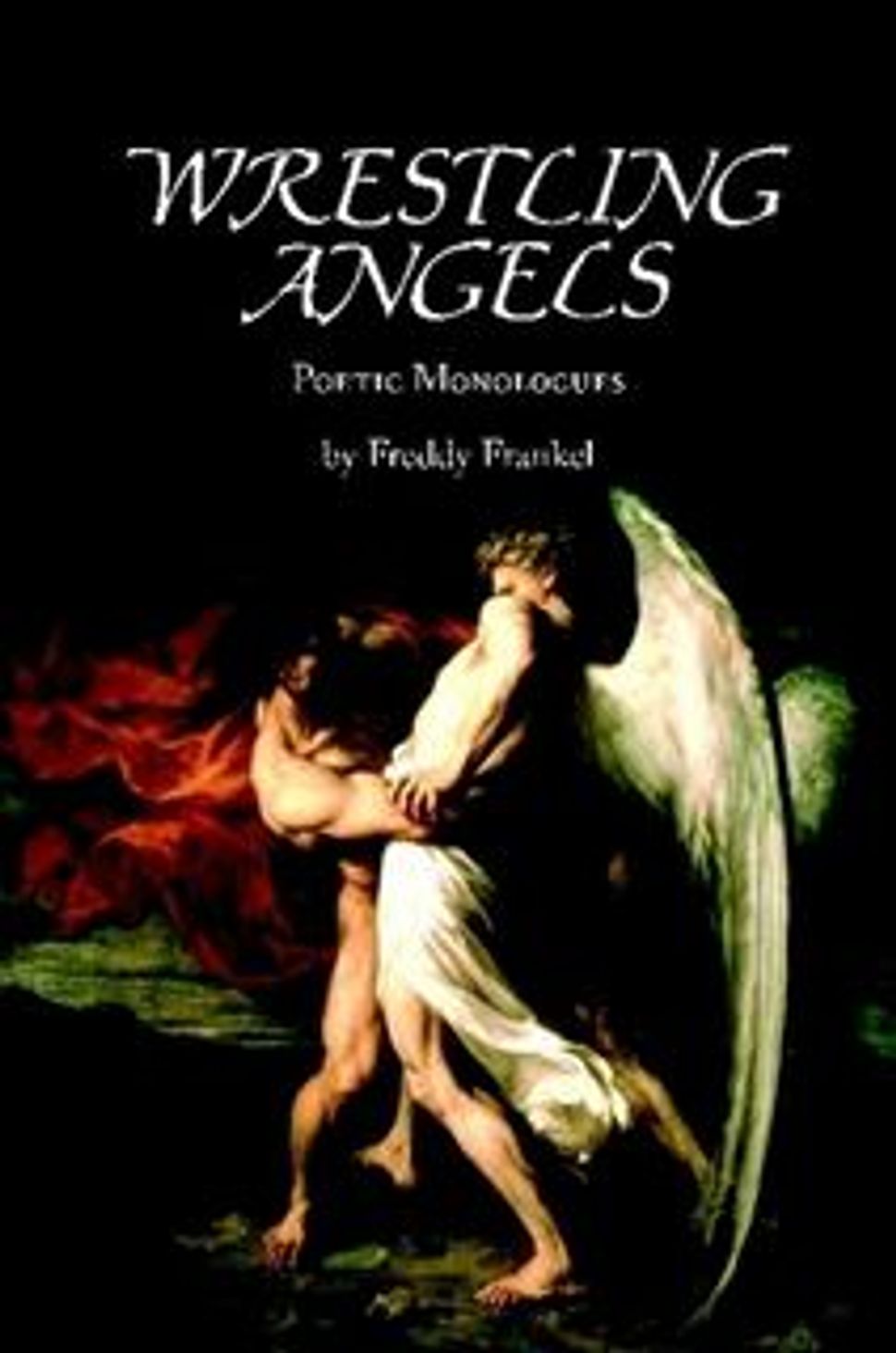 Interpreters of Genesis 22:1-19, which details Abraham’s near sacrifice of his only son on Mount Moriah, usually focus on the awesome loyalty and faith of our forefather. But Isaac’s role also invites analysis.

Psychiatrist and poet Freddy Frankel sees Isaac as a compassionate, perhaps older man who deems his father’s dilemma quite possibly unsound, yet empathetically calls him “my pious executioner.”

“In my conception, Isaac even suspected that his father perhaps heard voices in his head,” Frankel explained from his home in Newton, Mass.

Readers of Frankel’s forthcoming book, “Wrestling Angels” (Ibbetson Street Press), might wish to grant the still questioning, agnostic lyricist some academic leeway. In a former life as Fred H. Frankel, he served as the Director of Acute Psychiatric Service at Massachusetts General Hospital, a Professor of Psychiatry at Harvard Medical School, and from 1985 to 1997, Chief of Psychiatry at Beth Israel Hospital/BIDMC.

All of this, he maintains, is a past he has totally retired from in order to hone his long-dormant love of verse. His work has appeared in poetry anthologies and magazines including Moment, Senior Times and The Iconoclast. His chapbook “Hottentot Venus: Poems of Apartheid” (Pudding House Publications) appeared in 2003, followed by “In a Stone’s Hollow” (Fairweather Books) in 2007.

an urgent message
gripped inside his fist,
a mad voice in his head

he stumbles up the rise.
On the peak of Mount Moriah
wild with storms of dust

he tries to lock my hands
inside a noose, slam
my face in kindling.

The old man’s frailty
trembles like a flame,
I grab and steady

him, fold him in my arms,
kiss his brow —
the pious executioner!

There is more than a distinguished medical career or writing success to Frankel’s intriguing life. Raised in the Transvaal (now Gauteng) region of South Africa, he interrupted his M.D. program at Witwaterswand University to serve in the Sixth South African Division with the 8th British Army as a medic during World War II. “We didn’t know about the concentration camps, but my German relatives had come to South Africa in the 1930s, and we knew things weren’t good,” he said. He got close enough to action to be wounded by an exploding bomb.

While crossing into Italy from Egypt, he encountered a brigade of Palestinian Jews who were fighting with the British Army. He wrote poems about that, too.

How were things for South African Jews? “As a white person, there were no restrictions,” he said. There was, however, enough pro-German sentiment and British hostility to turn the government over to the apartheid-supporting National Party in 1948. Following the 1960 Sharpeville Massacre, Frankel’s family left for the U.S. “I never saw my father again,” he said.

Frankel began reassembling his past writing with the encouragement of Barbara Helfgott Hyett, a Brookline resident who cofounded the Writer’s Room of Boston. He also took poetry courses at Harvard Extension School and at the William Joiner Center for the Study of War and Social Consequences at the University of Massachusetts, Boston.

Frankel writes in metered verse. “Many people from British areas seem to speak in iambic,” he remarked. His poems encompass the Old Testament, Christian figures, the Dreyfus trial, Theodor Herzl, the Holocaust, and ultimately, God.

“These are…short, deft, impressionistic portraits that say as much about the poet as about his subjects,” said former Houghton Mifflin editor Lawrence Kessenich.

Added Tom Daley, poet-in-residence at the Boston Center for Adult Education: “One steps away from these poems breathless and chastened, smeared with the treacheries and foibles of many of these characters, and ennobled by the strange and searing candor with which Frankel gives voice to everyone, from Eve, to Maimonides, to St. Augustine, to Hitler.”

“Poetry is a wonderful way of expressing yourself and then really shaping the language so that it doesn’t only carry the sentiments and the emotions, but hopefully has a quality that is appealing to the reader,” said Frankel. “When I got on the plane to leave South Africa for a $12,000 a year job, I never expected that I would get this far.”

A bomb twisted the windows from their sockets,
shrunk rooms to rubble, doors swung
from the heartless walls.
Blood-soaked trousers clinging to my thighs

I sat, a stunned silhouette in the buckled jeep.
Christ stood outside the church, bronze,
as tall as a soldier,
neither his rod nor his staff could comfort me.

From my hospital bed
I look out on pastures spared by war,
olive groves, vineyards, leafy tongues of early spring,
starlings– St. Francis used to feed them from his hand.

My bandaged thigh unhinged between white sheets,
I think of how my grandpa makes a blessing,
winds the leather tefillin down his arm,
his breath anoints each word. I want so much to pray.