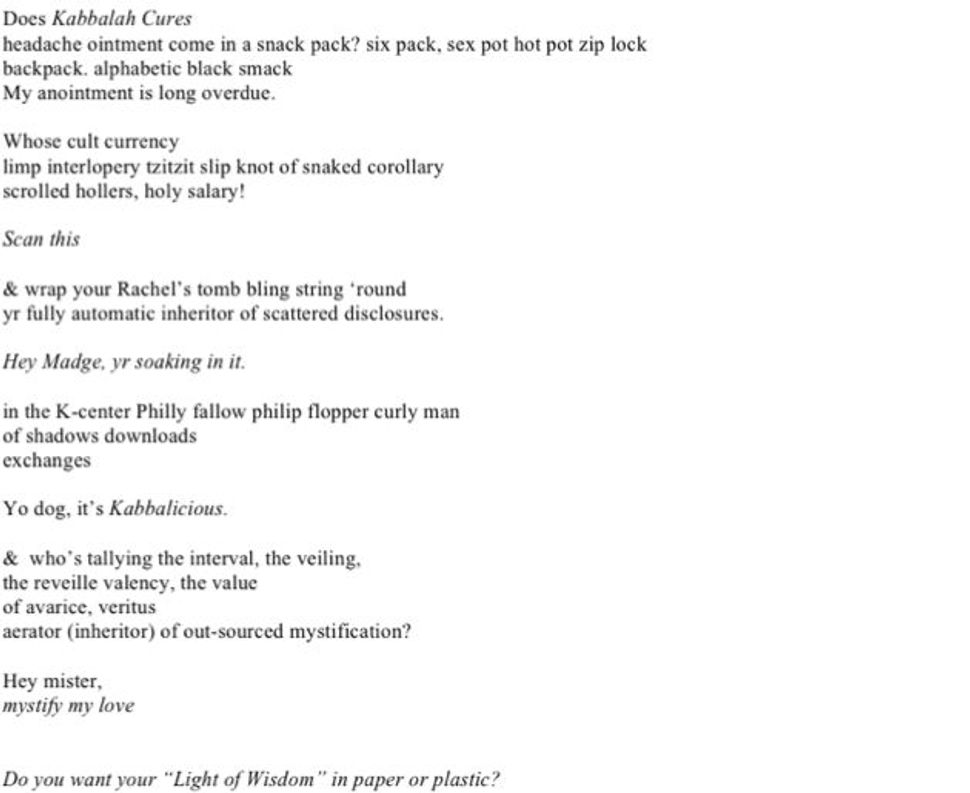 Poets eat defiance for breakfast — rule-breaking, language-bending, Houdini-like wriggling out of cliché’s confines comes with the territory. In the works of poet-performer-professor Adeena Karasick such poetic freedom-seeking is manifest by dancing between complex academic concepts, pop culture, and shtick. She oscillates from poetics to social commentary in a manner that is darkly funny, parodic, over the top, and wonderfully challenging. Just see her infamous “I got a Crush on Osama” YouTube video, and check out some of the audience comments that went along with it.

Karasick goes after forms, often those considered outside the realms of “good poetry” and conquers them. Have you ever, for instance, heard of a serious poet re-writing lyrics to a popular song? I don’t know of any, other than Tuli Kupferberg with his “Backwards Jewish Soldiers” hit, perhaps. In the first poem featured on The Arty Semite today, however, Adeena does just that — a brilliant reworking of Hotel California.

However tongue-in-cheek, and often outright hilarious, in this poem she is reclaiming Kabbalah, Jewish mysticism that is grounded in sacredness and playfulness of language — as poet’s territory, rather than that of Madonna or other celebrity dabbler. In her second poem, featured below, she further explores the resources of Kabbalistic rhetoric has to offer to poetry.

This month, as part of the Forward’s Poem a Day celebration of the National Poetry Month, we will be featuring an interview with Adeena, along with other interviews of six other poets — stay tuned!

(with my apologies to the Eagles)

On a black fiery trajectory
Cool texts that are rare
Warm smell of Kabbalah
Rising up through the heirs
Up ahead toward transcendence
I saw a shimmering light
My head grew heavy, (with hyperquadrants to skim)
I had to stop for the night
There it stood in the doorway
A Red String for Sale
And while i was transmuting to myself, i thought
This could be Heaven or this could be Hell
Then she lit a Havdallah candle
And she showed me the way
There were voices down the corridor
I thought I heard them say

Her mind is linguistically twisted
She’s got the sefirotic blends
She’s got a lot of learned, learned Ravs
That she calls friends
How they dance in the courtyard
Sweet zoharic sweat
Some scan to remember
Some chant to forget

So I called up the Rebbe
sd, “please decode this line”
He said, we haven’t had that translation here since 1269
And still those voices are calling from far away
Wake you up in the middle of the night
Just to hear them say

Merkabah on the ceiling
Pink shekhinah on ice
And she said
We are all just practitioners here
Of our own device
And in the Master’s chambers
They gathered for the feast
They hewed and carved it with their steely minds
But they just can’t tame the beast
Last thing I remember
I was running for the 231st gate
I had to find the passage, before it was too late

Relax, said the Rabbi
We are programmed to “Receive”
You can permute the text any way you like
As long as you believe

Welcome to the Hotel Kabbalahah….