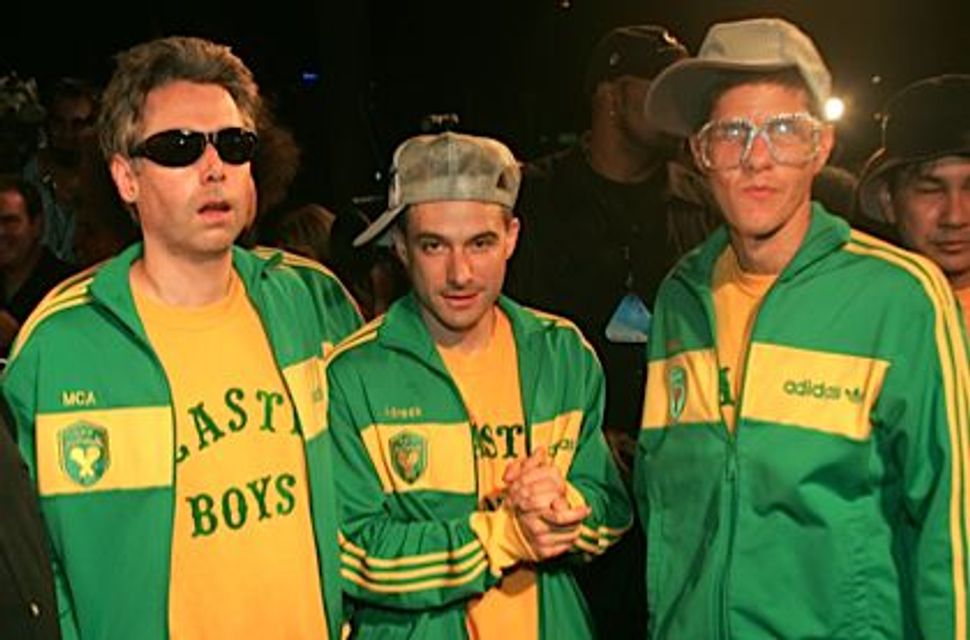 I imagine the hot sauce committee to be a studious and dour group, as dispassionate in their judgment of peppers and spices as the academy is of Red Peter the talking ape in Kafka’s “A Report to an Academy.” Which is to say, that if the Beastie Boys are not quite the heir to Kafka’s fantastical humor, they are at least a multimedia Marx Brothers, deviously pushing absurdity to new heights with each of their albums.

How else can we explain their latest project, “Fight For Your Right Revisited,” a 25-minute sequel to “Fight for Your Right (to Party)”? Released to accompany their new album, “Hot Sauce Committee Part Two,” the aesthetics of “Revisited” are perfect: There are the boys in their Adidas track suits and chunky gold chains leaving a party for a day-lit street that looks like the “Paul’s Boutique” album cover. Only instead of appearing themselves, the band cast Danny McBride and Seth Rogan as fatter, less whimsical versions of MCA and Mike D, and Elijah Wood as an even more awkward Ad-Rock, whose cherubic face hides his dark core.

This is a band that spent its entire career engaging in high-wire myth construction, from the Run DMC manqué of “Licensed to Ill,” to the neo-jazz of “The Mix-Up,” and the look of “Revisited” wonderfully recalls both the Boys’ beloved salad days and, we might have said in Yiddish, kills them to death.

In “Revisited,” the jocularity of “Fight for Your Right (to Party)” is exchanged for the awkward strain of modern comedy, in which actors squirm their way through successive levels of discomfort. Individual lines and performances manage to be funny (Danny McBride is the unquestioned Lawrence Olivier of the mode, and Seth Rogan’s performance allows him to exorcise some of the trauma of “Observe and Report”), but the overall effect is alienating. Then again, this seems to be exactly the point: The sequel brilliantly destroys whatever charm the image of their first album, “Licensed to Ill,” still held. (It is impossible to obliterate the musical joy of “Rhyming and Stealing,” “No Sleep Till Brooklyn,” or “The New Style.”) The songs on their debut album may still be their most famous tracks, but they were only able to become a great band by maturing and leaving that style behind.

As an album, “The Hot Sauce Committee, Part Two” is a welcome comeback from 2004’s “To The 5 Boroughs,” which was simultaneously their least successful and most Jewish album. (I prefer to think that these two facts have nothing to do with each other.) While Beastie Boys’ albums long had muted references to their religion (the best is from “Paul’s Boutique”: “get on the mic ‘cause you know you eat shellfish”), “To the Five Boroughs” featured Ad-Rock plumbing his ethnicity for lyrical humor. (The best line: “the truth is brutal/ your grandma’s kugel.”) But these references to Jewishness weren’t an emphatic embrace of their religion so much as another way to recapture the spirit of the 1970s, and the Jewishness behind so much of New York culture. Unfortunately, too much of that album was spent celebrating the great hip-hop groups of the past, and not enough was devoted to developing their own distinctive sounds.

That’s not a problem here. Musically, the new album is a more aggressive “Check Your Head,” though “The Hot Sauce Committee” doesn’t have the same cool vibe of that album. The Beastie Boys long ago broadened the sound of rap music by incorporating live instruments and grooves that sounded more like a soundtrack to ’70s pornography than the disco breaks of old-school hip-hop, and while “The Hot Sauce Committee, Part Two” calls back to that earlier album, it also adds some of the sampling of “Paul’s Boutique” and the technical experimentation of “Hello Nasty.”

The highlight of the band has always been the interactions of the three MCs, and “Hot Sauce” is no exception: MCA, Ad-Rock and Mike D finish each others’ thoughts like a well-rehearsed vaudeville act. It’s a lot of fun and, if “The Hot Sauce Committee” doesn’t quite reach the sublime heights of “Hello Nasty” or “Paul’s Boutique,” tracks like “Make Some Noise,” and “OK” show the Beastie Boys can still be one of the most absurdly entertaining bands around.