A New Breath of Yiddish Poetry 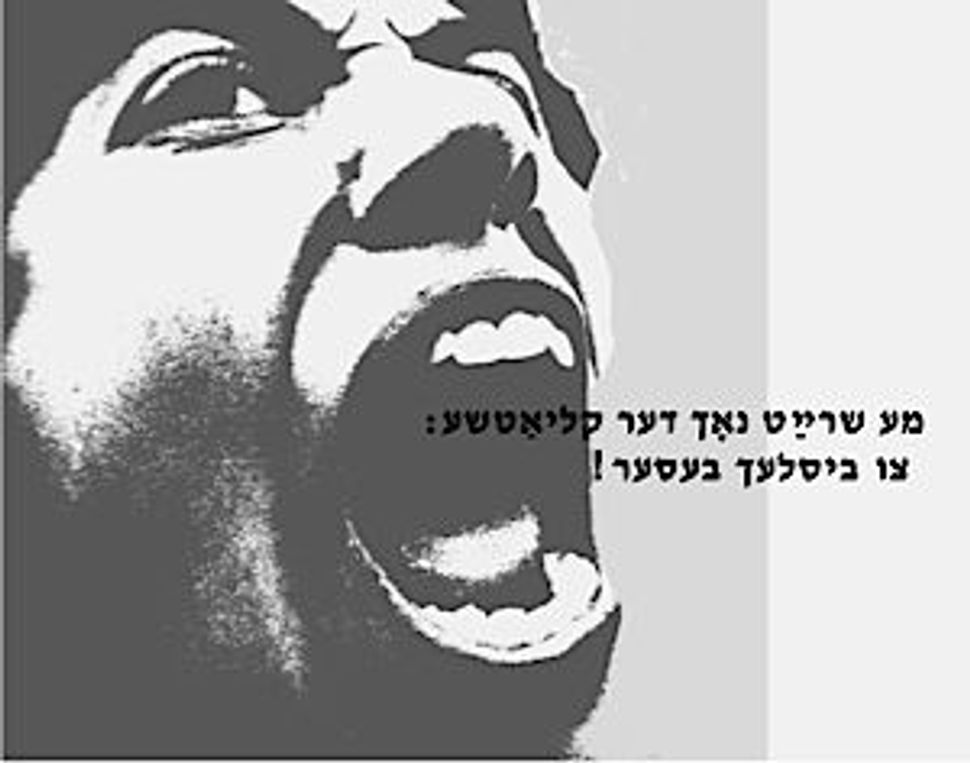 “I’m not going to be on Oprah,” said Zackary Sholem Berger matter-of-factly about his new book, “Zog khotsh l’havdil / Not in the Same Breath.” He’s realistic about his completely negligible chances, not because Oprah’s show and book club have just come to an end, but because he knows his work of original Yiddish poetry is not destined for a wide audience.

With no U.S. city today coming anything close to what pre-World War II Warsaw was (or even what New York was, for that matter) in terms of Yiddish publishing, producers of new literature in mameloshn need to go it alone and get creative about getting their work out there. Berger, 37, having translated a number of popular and beloved children’s picture books into Yiddish over the past decade, was well aware of this prior to writing his collection of poetry. He and his wife started their own Yiddish House (formerly Yiddish Cat) publishing company in 2003 to produce and distribute their Yiddish translations of Dr. Suess’s “The Cat in the Hat” and “One Fish Two Fish,” and “Curious George” by Margret and H.A. Rey.

With poetry aimed at an adult Yiddish-reading audience, as opposed to parents and grandparents tickled by the novelty of childhood favorites translated into Yiddish, Berger is changing his tactics this time. Whereas the children’s books are still ordered regularly by Jewish book stores, and gift and museum shops, those who desire to purchase “Not in the Same Breath” will be able to find it only online. The soft cover collection of poems (mostly in Yiddish with English translation, but also some solely in English) is available through the Amazon.com and Lulu.com self-publishing sites. “This system is great,” noted Berger. “This time around, we’re only printing on demand, so we won’t have to add to the large book inventory stored in our basement.”

Berger admits, however, that having inventory in the basement of his Baltimore home is better than his having had to store books in mini-storage in New York, where he and his family lived until two years ago. A poet and journalist on the side, as well as a Forward contributor, Berger’s day job is as a physician at Johns Hopkins School of Medicine. He is mainly self-taught when it comes to Yiddish, having taken an interest in the language as a high school senior in Louisville, Ky., when an English teacher who also knew German offered to supervise him in a Yiddish self-study program. He would sit at the back of the class reading the Forverts, and he recalls that the first Yiddish book he read was Sholem Asch’s “The Nazarene” trilogy. “It was really quite amusing that it was that particular book, given that I was in the Bible Belt,” Berger humorously reflected.

He later continued his autodidactic streak in Yiddish while studying at Cal Tech, and on a fellowship at Oxford from 1995 to 1996. He eventually arrived in New York for medical school in 1998, finding a Yiddish-speaking and Yiddish-revival community to which to belong.

Indeed, the Yiddish community has been key to the publication of “Not in the Same Breath.” Taking advantage of the Web and social media not only for printing and publicizing his poetry book, he also used them to finance the project. Last September, Berger put it on Kickstarter.com, and within about a month, contributions from 83 supporters (ranging from $5 to $130) surpassed his $3000 goal. Donors received various Yiddish-related rewards, with the poet even writing a special poem for one contributor’s wedding.

“I never thought I’d reach my target,” Berger said, “but I did, and we ended up creating community around the book.” He is fully cognizant that the audience for this book is smaller than for his others, but he nonetheless “feels more invested in this.”

A New Breath of Yiddish Poetry