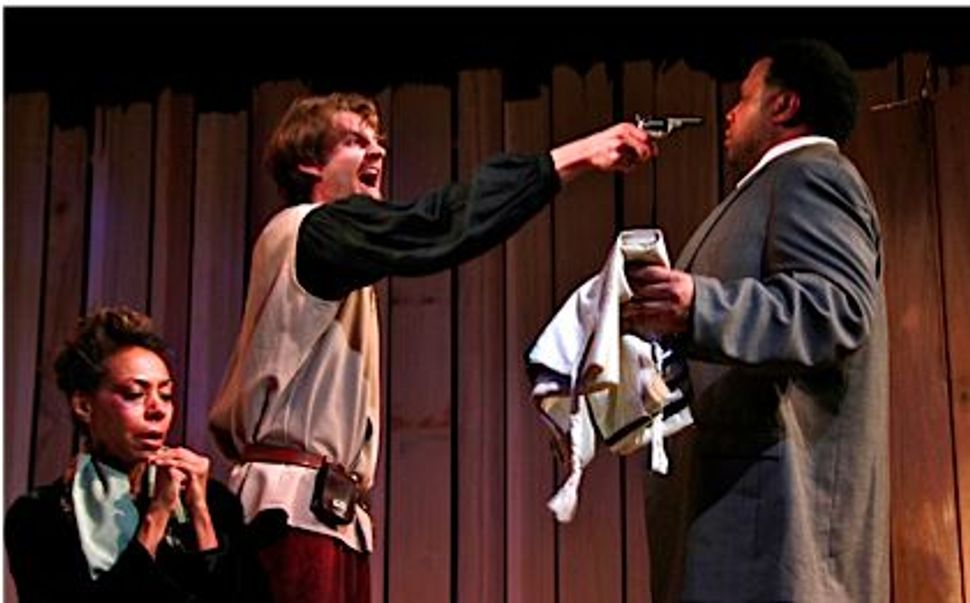 Trish McCall, Dan Bielinski and Marcus Naylor in ‘Under the Cross.’ Photo by Louis Zweibel.

This summer New York remains the center of Yiddish theater. Audiences looking for a lighthearted romp can go see Hershele Ostropolye (in Yiddish) at the Folksbiene. Those looking for a grittier Yiddish theater experience can head to Midtown and see I.D. Berkovitch’s 1924 play “Under the Cross” (“Untern Tseylm”) (in English), running until June 25 at June Havoc Theatre. “Under the Cross” is a production of New Worlds Theatre Project, a small theater company whose mission is to present new English language productions of Yiddish drama.

“Under the Cross” is set in 1923 Belarus, in the midst of the post-Revolution civil war. Berkovitch, like many Yiddish writers, had already left Russia by the time of the civil war, but remained keenly interested in events there. Unlike Dovid Bergelson, Der Nister and others, Berkovitch never returned to the Soviet Union.

The drama of “Under the Cross” centers on paterfamilias Moshke Ferapontov (Charles Roby), his wife, son and daughter-in-law. Moshke is a man in conflict. During a 25-year tour in the Russian army he became a Christian. Now a middle aged man, he’s spent most of his life as a Christian, living with Christians. Even so, his actions betray an inner connection to Jews, a connection that will test his sanity and propel the drama unfolding across the 25 hours of Yom Kippur.

What audiences will notice right away is that African-American actors have been cast in the Jewish roles: Moshke, his son Jacob (Anthony Laurent), and Rokhl Leah, a pogrom victim played by Trish McCall. “Under the Cross” was chosen in part to show, as director David Winitsky writes in his director’s note, that “the plays of the Yiddish theatre continue to speak to the universal human condition…”

I was pleasantly surprised to find that this artistic conceit, rather than being gimmicky, worked on a dramatic level. American audiences live within a racial economy far different from that of 1920s Russia. Here, Eastern European Jews generally pass as “white” and have for many years. In 1920s Russia, however, even though Moshke Ferapontov has lived most of his life as a Christian, his identity is always in question, his tenacious Jewishness too close to the surface. Is it possible to erase an identity perceived by others as “essential”? And what are the repercussions of that erasure? By casting African-Americans in the Jewish roles, the tension of conflicting identities pulses at the very top of the dramatic mix.

These are the universal resonances which I think the artistic team at New Worlds was hoping to evoke. But there is another narrative within “Under the Cross,” one which is somewhat undermined by this production. This is the narrative not of assimilation through conversion, but of Jewish assimilation into the Soviet proletariat. In the workers’ paradise anti-Semitism would be illegal and irrelevant. The local priest, Father Kiril, arrives onstage wearing an army hat with a large red star, proclaiming “God save the proletariat.” But Father Kiril is no Bolshevik, he’s inherited the hat from a dead commissar. Father Kiril’s many professions of love for the brothers of Christ are intertwined with the casual language of Jew hatred.

Would Jews be accepted as Soviets? Could the revolution really break down the centuries of prejudice against Jews? These were very real questions for Jewish writers and intellectuals of the time, and at least for Berkovitch, the answer is a bleak “no.” You can put an army hat on a priest, but that won’t make him a commissar. And you can call a Jew a comrade, but you can never erase the indelible differences between Russian and Jew.

Unfortunately, the production stumbles at the specific. The few words spoken in Yiddish are badly mispronounced, including the name of the battered Rokhl Leah. When Rokhl Leah is supposed to be praying Unessaneh Tokef we hear the mournful tune of Kol Nidre. (Even the Yiddish in the playbill is full of errors.) In order to heighten the illusion of an essential Jewishness at odds with an essential Russianness, the Jewishness has to ring true. There can be no universal meaning without the language of specifics.