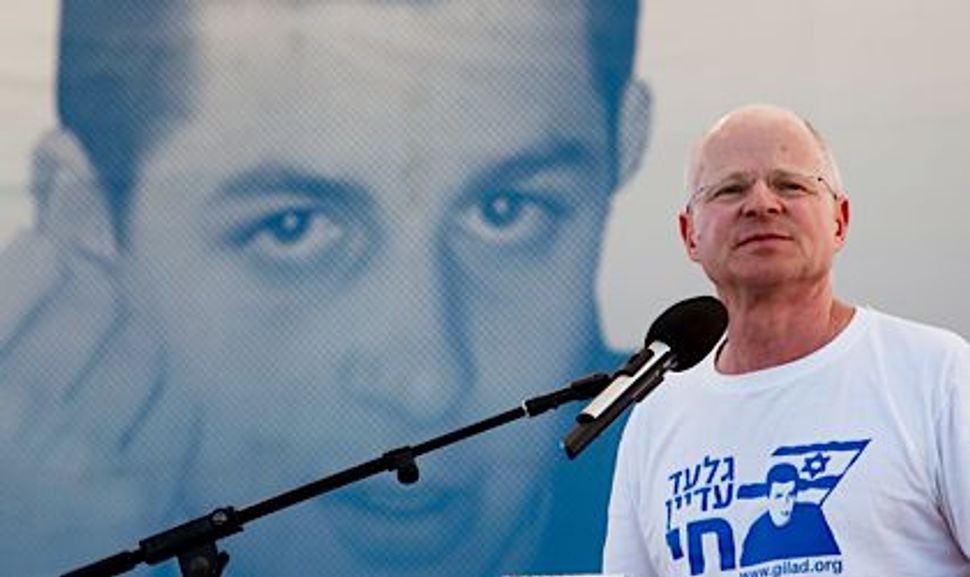 On June 23, the International Red Cross asked Hamas to provide proof that Gilad Shalit, the Israeli soldier captured in June 2006, is still alive. Hamas — to no one’s surprise — refused.

The timing is not coincidental. June 25 will mark five years that Shalit has been held prisoner by Hamas, without any direct contact from his family or visits from humanitarian organizations. This week and next, in an effort to keep Shalit’s plight on the front burner of American Jewish consciousness, Jewish community centers and synagogues across the country are screening “Family in Captivity,” a film by director Tal Goren focusing not on Shalit himself, but on the heart-wrenching ordeal suffered by his family since his abduction.

“Family in Captivity” is a moving, powerful film. Though it could be dismissed as an ineffectual effort at “raising awareness” — something audience members can pat themselves on the back for having seen, without actually doing anything about — it has a more ambitious purpose: to free Gilad Shalit.

First aired a year ago on Israeli television, and updated slightly for its current screenings, “Family in Captivity” is an intimate look at the life of the Shalit family over the past few years. Beginning and ending with the DVD they received of Gilad two years ago (the last time Hamas offered proof that he is still alive), the film follows his parents, Noam and Aviva, and his brother Yoel, doing everything from mundane tasks around their home in Mitzpe Hila to meeting with leaders such as Ehud Barak, Michael Bloomberg, Jimmy Carter and the Pope. (Shalit’s sister Hadas, who is currently serving in the IDF, chose not to participate in the documentary.)

The film maintains a disciplined focus on the family itself. Aside from news clips of Shalit’s abduction and a brief mention of the 2008/2009 Gaza War, it refrains from discussing surrounding events. In some respects, more context would have been useful. Some viewers at the June 21 screening at the JCC in Manhattan seemed confused about the inordinately difficult politics of the prisoner exchange that would be necessary to secure Shalit’s release. Not only would such an agreement allow potentially dangerous prisoners to go free, but it would upset many Israelis who have lost family members to attacks perpetrated by those very prisoners. Without this context, it is difficult to understand why the Shalits are protesting against the Israeli government, or what their quarrels are with bystanders that appear in the film.

For the most part, however, “Family in Captivity” is wise to concentrate solely on the Shalit family. With this approach it avoids the usual tit-for-tat in which competing narratives, sufferings, and injustices have to be taken into account. Instead, it remains the story of a single tragedy and a single pain. To demand that it show both sides would be to demand that it show all sides — a useless and futile undertaking. This is the Shalits’ story, and their story alone.

Of course, as is often remarked, in Israel the Shalits’ story is also everybody’s story, and Gilad is everybody’s brother or son. And in its close attention to the family, the film is bound to affect all viewers, Israeli or not. It shows Aviva Shalit looking through baby pictures of Gilad and talking, with heartbreaking stoicism, about her coping mechanisms. It shows Noam Shalit writing a letter to his son, to be delivered to Hamas by Jimmy Carter, and then asking a wriggling and non-committal Carter if he can confirm that the letter was delivered. It shows the family setting up a protest tent outside of the Israeli Prime Minister’s residence, leaving the tent to go home, and then returning once more. Today, the Shalits continue their protest.

Most of all, “Family in Captivity” shows the family’s heroic efforts to do everything in their power to free Gilad, even when their attempts come repeatedly to naught. As producer Tamar Pross attested at the June 21 screening, the Shalits are unassuming, private people who would normally avoid the media spotlight, and this aspect of their personalities is apparent. But the film also demonstrates, both in its depiction of the family and through its own existence, that the Shalits’ most effective tool in the quest to free their son is the public display of their own grief. It is, simply, the most powerful way to gain public support and put pressure on the Israeli government, as well as the international community. Adding tragedy upon tragedy, they do not even have the luxury of their own private suffering.

Sadly, five years after his capture, an agreement between Israel and Hamas for Shalit’s release still seems far from realization. While Hamas makes it criminally impossible to know what his condition is, or even if he is still alive, “Family in Captivity,” vividly demonstrates his family’s awful ordeal. We shouldn’t need to be reminded like this of the human toll that the Israeli-Palestinian conflict continues to take. But this film shows that that we do — and it does.