Why We Love Super Sam Fuld (So What If He’s Only Part-Jewish?) 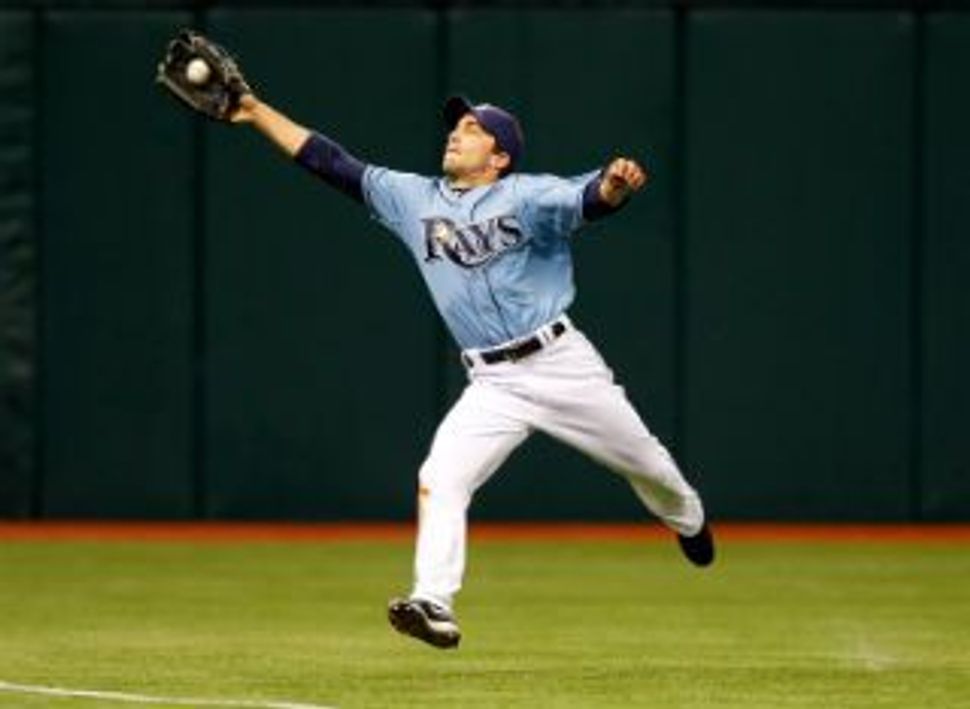 When we talk about Jewish athletes in American professional sports, we’re dealing with a very small spectrum. The only athletes at or near the top of their sports seem to be those Jews in baseball — where Kevin Youkilis, Ryan Braun and Ian Kinsler have all-star caliber talent.

But another name is creeping not just into the Jewish baseball discussion, but into the broader baseball discourse as well. And though he finished a modest 23rd in all-star voting for American League outfielders, the fact that Sam Fuld managed to get 1 million votes is a testament to what he’s been able to accomplish this year for the Tampa Bay Rays.

Fuld’s fascinating rise to prominence in 2011 is the subject of quite a few features, including a recent one by Ben McGrath in the The New Yorker. The Rays outfielder certainly makes for an interesting story. Fuld, whose small stature only adds to his underdog persona, spent much of his early career in obscurity with the Cubs. He was a late-season call-up in 2007, 2009, and 2010, but didn’t get a real chance to shine until he was traded to the Rays before the 2011 season and named their fourth outfielder. And just as Manny Ramirez’s steroid downfall forced him out of the game, Fuld was forced into it.

With everyday starts, Fuld thrust himself into baseball’s collective consciousness. His hot hitting in April was matched only by his amazing willingness to throw his body in any direction for a ball in the outfield, resulting in a slew of highlight-reel catches His most famous is the “Superman” catch which spawned the “Legend of Sam Fuld,” a veritable Twitter bonanza.

And while Fuld’s hitting has fallen off as the season has worn on, he has never stopped making incredible plays in the outfield. The abandon with which he goes after each ball has endeared him to many fans. (Those 900,000 plus all-star votes he received are a testament to that appeal.)

Fuld’s mother is Catholic, and though his father is Jewish, he was never bar mitzvahed. But that won’t stop Jewish fans from seeing him as an embodiment of relentless determination amidst the odds against them.

Why We Love Super Sam Fuld (So What If He’s Only Part-Jewish?)