Q&A: Jon Favreau on Spielberg, ‘Iron Man’ and Being a Model Actor 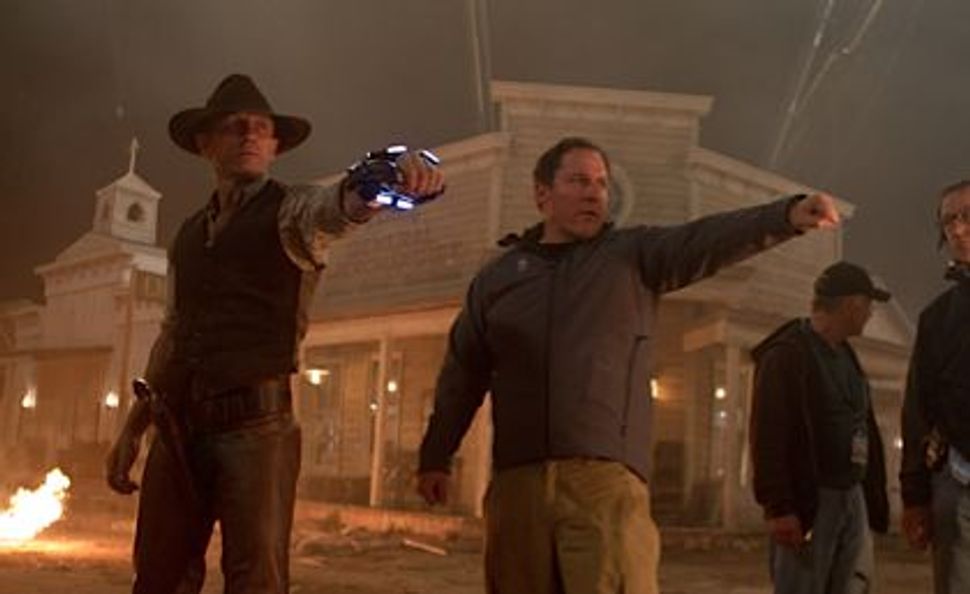 Jon Favreau (right) with Daniel Craig on the set of ‘Cowboys and Aliens.’ Image courtesy of Warner Bros.

Jon Favreau, director of the big summer tentpole film, “Cowboys and Aliens,” grew up in the Forest Hills section of New York, the son of a Jewish mother and an Italian/French Canadian father. He got his first break with a starring role in “Rudy,” the 1993 film about the little Notre Dame football player who could. He achieved prominence, however, as writer and star of the 1996 indie favorite, “Swingers.” Other roles followed, but like everyone in Hollywood, what he really wanted to do was direct.

Unlike many would-be directors, Favreau has been extraordinarily successful, helming films such as “Elf” and the first two “Iron Man” movies. His latest, Cowboys and Aliens, is an adaptation of a graphic novel by Scott Mitchell Rosenberg, starring Daniel Craig, Harrison Ford and Olivia Wilde. It opened July 29 and tied with “Smurfs” as the number one picture of the weekend, grossing over $36 million in the U.S. Favreau spoke last week with The Arty Semite about his Jewish mother and mother-in-law, why he gave up directing the successful “Iron Man” franchise, and how intimidating it is working with Steven Spielberg and Ron Howard.

Curt Schleier: Were you raised Jewish?

Jon Favreau: I was definitely brought up around Jewish culture. My grandparents kept kosher and I went to Hebrew school. Then when I was 13, a year or so after my mother passed away, I was bar mitzvahed. I had an aliyah, but I never actually read from the Torah.

How are you raising your children?

The moment you have children things change. My mother-in-law speaks Yiddish to them — words like bubeleh I almost didn’t think of as Yiddish. And patch in tukhes. I am bringing up my children Jewish by example. I light candles. I am not pushing them into study. I want them to explore the stories of the Old Testament and our people and to make it something that is nurturing, more the Tom Sawyer paint-the-fence approach.

Do you think your Jewish background informs you professionally?

I was definitely influenced by Woody Allen and Albert Brooks. And I’ve definitely played the shlemazel. I think there is a self-deprecating aspect of my persona that owes a lot to its Jewish roots.

Your parents were teachers. You attended the prestigious Bronx High School of Science. How did you wind up in acting?

I grew up in Forest Hills, [Queens,] where I went to school. I enjoyed doing the school plays and I was a bit of a class clown. I always enjoyed it, but never saw it as a realistic professional possibility. I wasn’t even allowed to try out for [the High School of] Performing Arts.

I didn’t know show business. I didn’t know what was involved in it. I knew movies. I even worked as an usher at the RKO Keith [movie palace]. It wasn’t until much later, when I was traveling on a cross-country vacation that I discovered [Chicago comedy troupe] Second City and decided to try my hand.

By that time, you’d worked briefly in finance, attended college, and even taken the FDNY test. What made you decide this was it?

I saw [Second City] performing. All my heroes went there: Bill Murray, Dan Akroyd, Alan Arkin. Everybody listed on the wall of alumni were people I loved. I lived there for four years until I was hired to be in “Rudy.”

You’ve pretty much done it all: acting, writing and directing. Which do you prefer?

I enjoy the directing most. I’ll still do cameos for people. And I’ll definitely perform when I’m promoting a film. It’s definitely an asset to be an actor when you’re doing publicity. But the idea of doing someone else’s movie and working on three or four projects a year doesn’t appeal to me.

I’m a little more obsessive. I like to pick premises and ideas apart and I like the two-year process of making a big movie. There might be an acting part in my future. I am a model actor. I’m always on my mark and I’m on time and I find that with most people who do both [acting and directing] the acting is a pleasure and much more fun because you don’t have to second-guess everything you do.

You built a successful franchise with the two “Iron Man” movies you directed. Why give that up?

I did two of them back-to-back and it was a great opportunity. I had a nice solid, safe run. But I wanted to take a chance on something. You’re not always in a position in Hollywood where people are going to take a chance on you. I’m inspired by people like Walt Disney who always tried to invent new things and break new ground. That’s where the thrill comes in. I’m not looking to have as much money as possible. I’m interested in having as fulfilling a career as possible. Don’t get me wrong. It’s nice to earn money, but that can’t be the determining factor. If you do good work, the money should come.

Why do “Cowboys and Aliens”? Were you a comic book geek?

I was more of a movie geek than a comic book geek. But this was a chance to collaborate with [executive producer] Steven Spielberg on such a rare project. Myself, Steven, [executive producer] Ron Howard and [stars] Daniel Craig and Harrison Ford all really pined to make a big broad western like this. We all bonded on that communal passion as we came together to make a hybrid popcorn movie.

Were you intimidated working with Spielberg and Howard, two of the most successful directors in Hollywood? Did you need to resist the impulse to wear a WWSD (What Would Steven Do) bracelet?

Yes, of course it was [intimidating]. I definitely considered their sensibilities as we were developing the project. But I was also collaborating with the actors on the set. They had a tremendous amount of input, as my cast always does. Then in post-production Steve and Ron had input, but they weren’t very demanding.

It’s possible. Not only is she beautiful, but she’s smart and funny and a real mensch.

You’ll mention me then?

Q&A: Jon Favreau on Spielberg, ‘Iron Man’ and Being a Model Actor