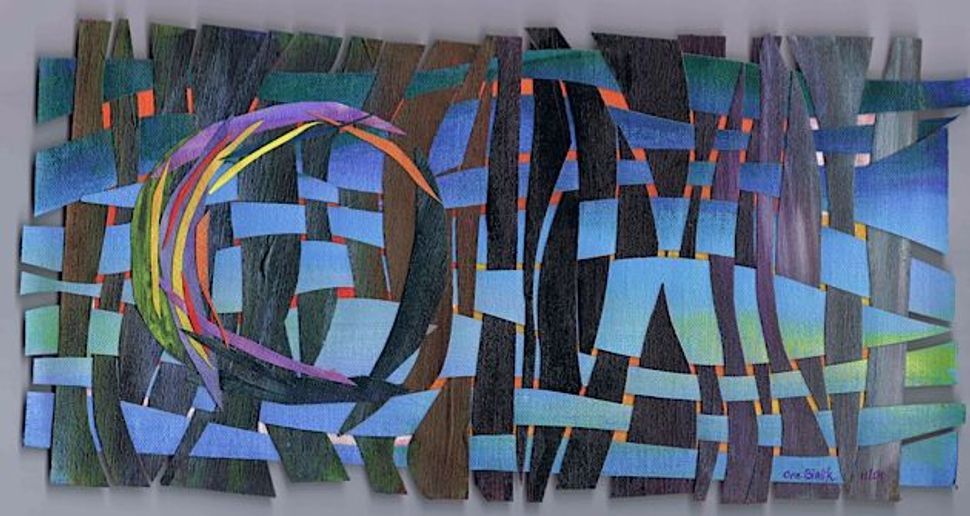 It may be a miracle: A biblically themed exhibit has opened in Brooklyn without any mention of Adam and Eve. This month the new “Genesis” exhibit opened at the Hadas Gallery in Fort Greene. The absence of the imagistic leaf-clad duo on the white walls of the intimate space was a welcomed departure from typical portrayals of the lofty and iconic religious book.

But that is not to say artist Ora Bialik did not cleverly disguise the ill-fated pair in her contemporary, abstract work. Such ambiguities and interpretive knots are left for the viewer to comb through in the series of 30 paintings that climb chronologically throughout the space.

The gallery, a non-profit educational and cultural organization under the umbrella of the Rohr Jewish Student Center at the Pratt Institute, nurtures an open philosophy that encourages creative expression centered on Jewish themes. The mission statement’s spirit springs to life in the diverse artworks that revolve in and out of the space, varying from sculpture to photography to figurative exhibits to group shows.

The multifarious nature of the gallery provides a powerful backdrop to Bialik’s work, which functions on several literal and metaphorical layers. In the majority of the pieces, Bialik transcends multiple genres including sculpture, painting and building. The process begins with a large color-field painting that spirals and deepens into warm, opulent hues, blended with manipulated acrylic paint to infuse it with a shimmery glow. However, the initial painting is simply the prelude to elegant, vibrant collages. Once painted, the canvas is cut into strips and shapes which Bialik layers and weaves into the final product.

Although the exhibit is designed as a linear narrative, the pieces are so self-sustained that they can be appreciated as individual paintings. Number 22, titled “Back to Nature,” displays all the materials Bialik uses without paint. The direct, naked presentation of the earthy canvas, linen and cotton duct tells its own story of a natural, untainted universe before having been smudged with color.

Numbers eight and nine, “The Lesser Luminary” and “The Greater Luminary,” work more as a symbiotic pair. The moon, an iridescent, violet lunar prism, is tinged with jagged rays of orange that peek through and hang next to an egg-yolk sun that radiates warm, mustardy yellows.

Certain pieces offer a fairly direct representation, such as the successive depictions of the creation of fish and birds, which boast clear shapes of wings and fins. In contrast, the first painting, “The Earth Was Without Form…and Darkness Upon the Surface,” vacillates between foreboding and optimism. From a distance the open, rounded edges appear dark, assuming an ominous inky blackness, but upon a closer glance a panoply of deep blues, verdant greens and copper amber emerge, suggesting light and fertility.

Subject to the inherently cumbersome nature of this particular biblical chapter, Genesis pieces can often be instructional and overbearing. Bialik reinvigorates the ancient material with a vital new vocabulary, imbuing the coarse subject matter with an airy, ethereal quality. Having set the tone with her color swatches, she cultivates a descriptive language through careful color pairing and spatial design.

Bialik’s talent emerges most spectacularly in “Let the Earth Sprout Vegetation.” The colors in the painting melt from tangerine-nectar to a plush, forest green, illustrating the original uniformity. However, a thin, green sliver in the corner implies distance between itself and the centralized red figure, generating a sense of elapsed time. Bialik uses bits of weathered string, which creep off the canvas, dictating a blatant rejection of confinement.

Bialik’s work carries an intrinsic meta-significance, focusing on the process of creation in an artistic context. The process is deliberate, but the pieces remain a mystery, until they have reached completion.