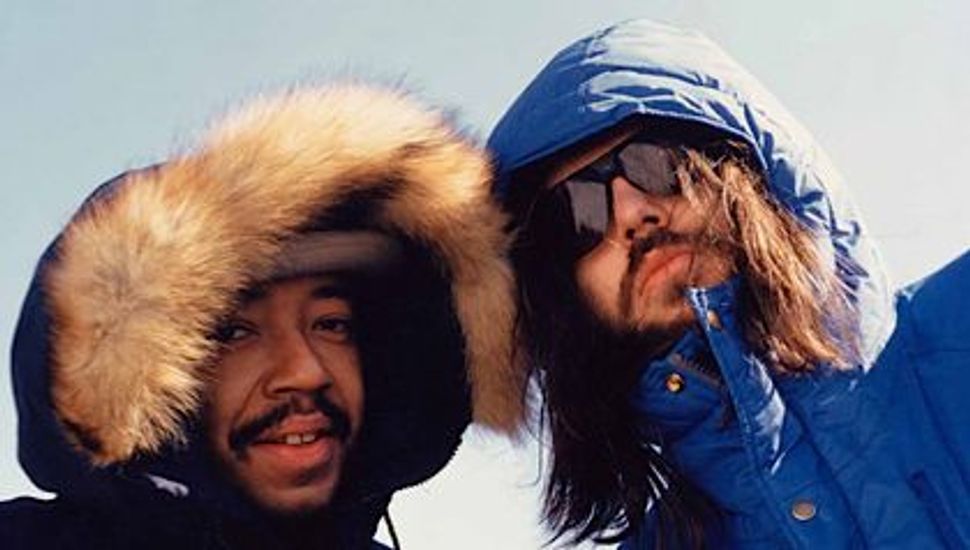 Image Courtesy of the Adler Archive

This week “Def Jam Recordings: The First 25 Years of the Last Great Record Label” arrives in book stores. The 300 page hardcover tome is 12” X 12,” the same size as an old school LP and has a cover price of $60. It may be chock full of characters from the ‘hood but it is published by the tony art house Rizzoli. The book is being hyped as an insiders’ telling of the storied label’s history accompanied by a treasure trove of behind-the-scenes photos, flyers, ads and album cover art. What the press doesn’t mention is the pivotal role Jews played in the legendary hip-hop label’s creation and growth.

There are pictures of label founder Rick Rubin, who made Def Jam’s first hit record while living in the dorm at NYU. In one shot, Rubin is seen at a Vanity Fair Oscar party sporting a graying beard that would be the envy of many a Hasid. He’s with Def Jam mogul Russell Simmons and Lyor Cohen, the son of Israeli immigrants and grandson of an Israeli Army general. Cohen initially ran the artist management side of Def Jam, before becoming president of the label. He’s now an executive with the Warner Music Group.

The Def Jam history was co-written by Bill Adler, the label’s founding publicist, who is also Jewish. Adler notes that Glen Friedman, the photographer who took a number of iconic photos of Def Jam artists, is also a member of the tribe. As is Julie Greenwald, who worked in Def Jam’s promotions department back in the day and is now president of Atlantic Records.

“Anybody who assumes that because most of the ground-breaking artists in hip-hop are black, that most of the people working behind the scenes are also black, doesn’t know the history of the music,” Adler told The Arty Semite. “There have been people of all backgrounds working behind the scenes right along, including a fairly remarkable number of Jews.”

Adler, whose Xmas Jollies mixtape was featured on The Arty Semite last year, came up with the idea for Run-DMC to do “Christmas in Hollis” back in 1987.

“Russell is a philo-Semite. He is somebody who likes Jewish folks and has Jewish partners and he’s always been that way,” Adler says of Def Jam honcho Russell Simmons. “I came in [to Def Jam] under Russell’s wing. If I was ok with Russell, I was ok with everybody. Nobody cared that I wasn’t black.”

Not everyone on Def Jam’s roster can be described as a philo-Semite, however. In the late 1980s the band Public Enemy made waves when its “Minister of Information,” Professor Grif, made anti-Semitic statements in interviews here and in England. Public Enemy was red hot at the time but Adler, who was publicizing 30 Def Jam acts in 1989, decided he wouldn’t work with the band any more. It was not Adler’s last brush with anti-Semitism in the hip-hop community.

By 1991, Adler had left the label and was working as an independent publicist. In the fall of that year rapper Ice Cube endorsed “The Secret Relationship Between Blacks and Jews,” the Nation of Islam’s anti-Semitic work written by anonymous scholars. Adler was so upset that he instigated a scholarly rebuttal titled “Jew On the Brain,” which was released in the summer of 1992 in time to be distributed at New Music Seminar, a multi-venue music showcase organized by Tom Silverman of Tommy Boy Records fame.

Despite the run-ins with Public Enemy years ago, Adler is still close to the Def Jam crowd, many of whom attended openings at his now defunct hip-hop photo gallery in Chelsea. The former publicist has remained friends with Cohen and Simmons and when Def Jam Enterprises approached him to write the book, it was a no-brainer.

“It remains family,” he said before hopping on a plane recently to accompany his TV chef wife, Sara Moulton, on a cooking trip to France.