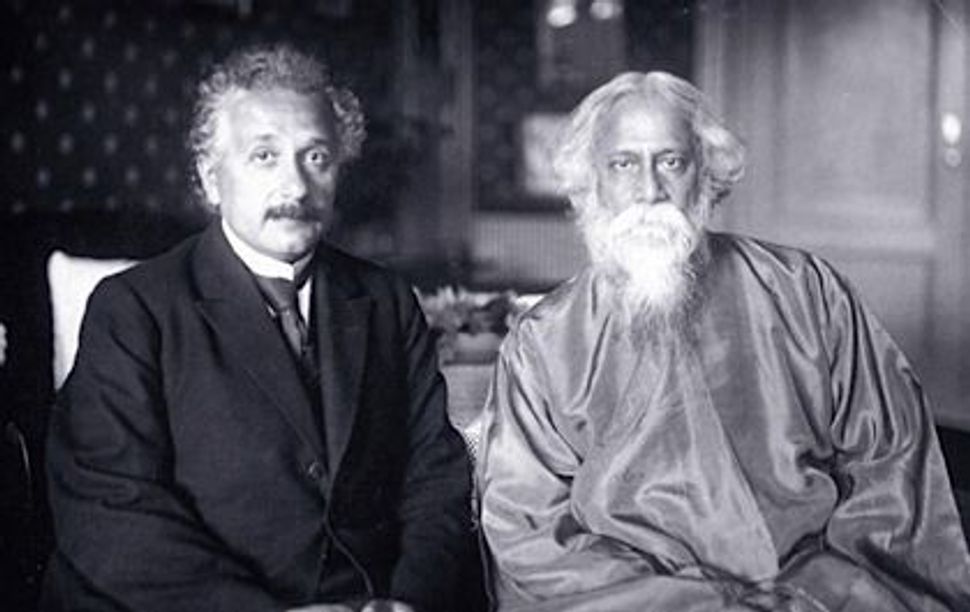 One was a Bengali polymath and Nobel laureate with white flowing beard and piercing eyes. The other was the world famous scientist, with frizzy hair and unkempt appearance.

When Rabindranath Tagore and Albert Einstein met in New York, it was a media sensation. “They were two celebrities,” artist and scholar Andor Carius said. “It was wisdom from the east meeting philosopher of the west. They were staged together as icons by the media even earlier.”

The pair first met in Berlin in 1926 and several times later in 1930. The first meeting that year, at Einstein’s summer home in the vicinity of Potsdam, resulted in The New York Times headline, “Einstein and Tagore Plumb the Truth.” The piece described Tagore as “the poet with the head of a thinker” and Einstein as “the thinker with the head of a poet.” Their brief meeting in late 1930 in New York, when Einstein was en route to Caltech, bore the photo caption: “A Mathematician and a Mystic meet in Manhattan.”

Considering these events, it’s hard to imagine just how famous Tagore once was in the West. With his works impressing the likes of William Butler Yeats and Ezra Pound, Tagore lectured to packed audiences around the world. Two separate works of his became the national anthems of Bangladesh and India.

Paul Mendes-Flohr, a professor at the University of Chicago, discussed Tagore’s connection to Einstein in a recent lecture hosted by the Leo Baeck Institute.

“Despite their warm regard for one another, their conversation did not go particularly well,” said Mendes-Flohr. Tackling heady topics like free will versus determinism, the two titans stood poles apart philosophically. Einstein believed the world had a reality independent of the human mind. Tagore countered, saying “This world is a human world.” For him, the world depended upon human consciousness for its reality.

The Oxford philosopher Isaiah Berlin noted that, “I do not believe that, apart from professions of mutual regard… there was much in common between them — although their social ideals may have been very similar.”

Berlin went on to recount how Einstein later privately described the Indian writer as “Rabbi Tagore.” Berlin asserted that the physicist was being gently ironical. For, he noted, “Einstein did not hold with rabbis much.”

One area in which the pair were compatible was music, said Mendes-Flohr. Einstein was visibly engaged when Tagore compared western and Indian music.

Mendes-Flohr’s lecture also examined relations between Tagore and Martin Buber, the dialectical philosopher and author of “I and Thou.” The professor made it clear just how early Buber’s interest in the East was.

“Even before he evinced an interest in Hassidism, he identifies with Hindu wisdom,” said Mendes-Flohr, citing an early article written by Buber at the age of 23.

Mendes-Flohr, who edits the collected German edition of Buber, told how Buber spoke of “The Spirit of the Orient and Judaism” in a talk given in Prague in 1912 before the Bar Kochba Jewish Students Association, with Franz Kafka in the audience.

Tagore and Buber met only twice. The first time was in 1921, when Tagore delivered lectures in Darmstadt, Germany, at which Buber found the Indian writer “loveable, innocent, [and] venerable.” The later occurred when Buber attended a lecture by Tagore in Düsseldorf in 1926.

Buber and Tagore shared views on a number of subjects. Both sought to ease ethnic divisions in their respective countries. Both shared similar views of education and pedagogy. And with certain differences in emphasis, each feared the danger of Zionism becoming what Buber called a “narrow-hearted nationalism.”

Mendes-Flohr told the Forward how Tagore befriended Zionists and had sympathy for the Jewish people as well as for Zionist pioneering programs, particularly in the realm of agriculture and agricultural settlements. Tagore, he said, invited various Zionist agronomists to come East to visit, as the poet was very concerned about the situation of peasants in his native Bengal.

In his talk, Mendes-Flohr described how Einstein and Tagore surprisingly continued to meet again. In celebration of the 100th anniversary of Tagore’s birth in 1961, the city of Tel Aviv named a leafy road after him near Tel Aviv University. That street intersects with one named for Einstein, and their dialogue thus persists to the present.