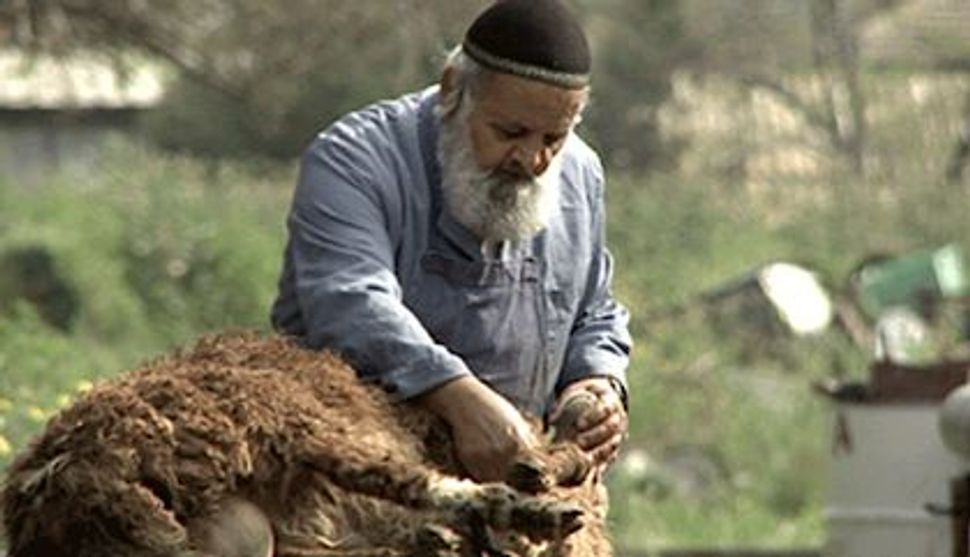 After seeing the documentary film “The Hangman,” screening November 15 at the U.K. Jewish Film Festival, it is hard not to think of Shalom Nagar as the Forrest Gump of Israel. Like the character played by Tom Hanks, Nagar improbably finds himself in the midst of historical events and meeting famous (infamous, really) people. And according to the yarns the simple-yet-wise Yemini-Israeli butcher spins for his friends, neighbors and the camera, he even helped shape the history of the modern Jewish State.

“The Hangman” is a small, riveting film by Avigail Sperber and Netalie Braun, grantees of the Foundation for Jewish Culture’s Lynn and Jules Kroll Fund for Jewish Documentary Film. Through it, they tell the story of some of the most pivotal moments in Israeli history through the eyes of the kosher slaughterer who happens to have been Adolf Eichmann’s executioner. Nagar, who was formerly a prison guard, was also posted to the prison in Hebron, where he was among the first Israelis to guard imprisoned Palestinians under Israel’s then-newly established Military Administration. He also happens, according to his version of events, to have been the one to suggest to the Administration that the original settlers in Hebron in 1968 (Rabbi Moshe Levinger and 14 families) be given rooms converted from King Hussein’s stables to live in.

Nagar also happened to be on site when Dr. Baruch Goldstein killed 29 and injured 125 Muslims at the Cave of the Patriarchs in 1994. It was following that event that Nagar decided to move his family out of Hebron, where he had lived for many years following Levinger’s invitation to join the settlers. He doesn’t give long political or ideological explanations for why he decided to leave. In his characteristically uncomplicated way, he simply says that things were not good anymore and it was time to go.

Despite his seemingly accepting and God-fearing persona, Shalom Nagar is in many ways a complicated and hard-to-understand individual. Sperber and Braun capture the look in Nagar’s eyes that suggests more to this real-life character than religious platitudes and an affable nature. How could this not be so for a man who was traumatized by having to pull the lever on Eichmann, but who finds peace of mind slaughtering animals on a daily basis?

Watch the trailer for ‘The Hangman’: